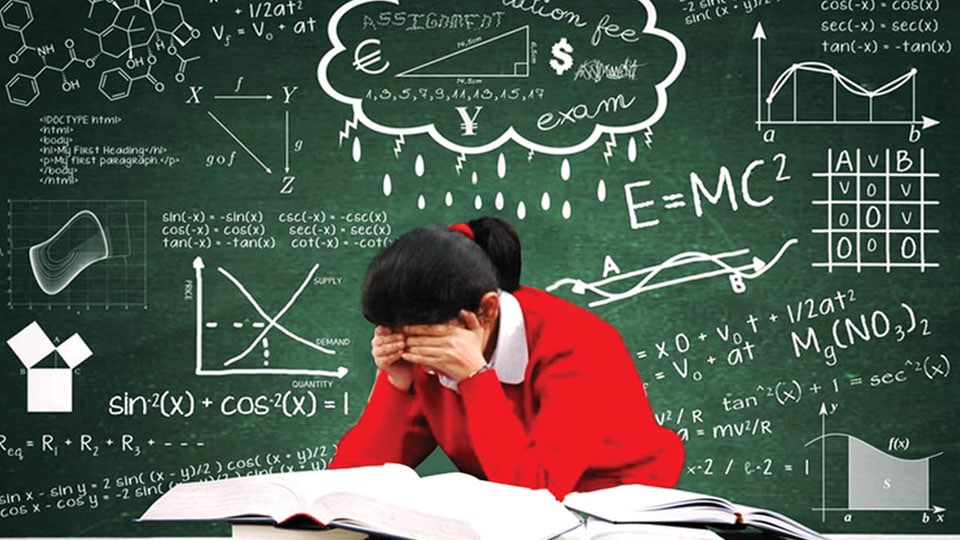 You don’t flunk life just because you flunk an exam

It’s the season of anxiety — PUC and SSLC board exam results are out. The colleges pray for a rank to increase their marketability, the school Principal wishes for high pass percentage to secure his job, the parents hope their ‘status’ is intact while the student is in a state of panic. And who wouldn’t be, the prestige of your family, your College and your Principal’s career is on the line.

The competition is such that these days anything in the 90s is no big deal. The cut off for many colleges is 98% and numerous students score above 95. And quite a few score 100% in certain subjects and you hear the grandparents saying “my grand child is a genius.”

Incidentally, the latest edition of the National Geographic has a cover story titled Genius: Why some people are smarter than the rest of us.  The reason is not IQ. The report states that “though intelligence has often been considered the default yardstick of genius, a monumental intelligence on its own is no guarantee of monumental achievement.”

Then what is? According to one of the psychologists citied in the magazine, “There are differences when it comes to individual talent, but no matter how brilliant a person, fortitude and discipline are critical to success.” The magazine also states that the arc of one’s career depends on two factors: Your chosen discipline and how soon you master it.

It’s obvious success does not come effortlessly. So the students who have scored high marks have put in the effort. If they say it came easily they are lying, and if you believed it, you obliviously are not featured in any of the college advertisements.

Oh ! The Stallions and Donkeys

Now once the results are out, the students go from being biped to quadruped  as they are paraded like winning horses. Like in the case of a winning race horse — trainer takes credit like the colleges, the jockey charges extra like the tuition centres and the  student like the horse, which endured the strain, pain and sweat, is dazed and confused while the owners, the parents, pose with their winning horse for pictures.

Yes, it is a proud moment. But… who should take credit for the student’s success; the parents, the college or the tuition centre? Just look at the advertisements placed by the colleges proudly displaying their distinction students. But then advertisements placed by the tuition centres also have the same students. So who should take credit? We bet even the distinction students would fail to answer this question.

But what about the ones who ran like donkeys? They should have worked harder one would say, which is true.  But unfortunately, once you make a mistake of running like a donkey, especially in second PUC our society does not give you a second chance. Herein lies the problem.

A failure in Pre-University seems to embed a harsh sense of finality — the END,  in our young minds. That an exam, for which a student appears at a young age of 18 can be so overbearing and powerful that it can bring such a finality, such a sense of unworthiness, that it drives them to suicide and deep depression is very disturbing.

In 2015, 572 people committed suicide in Bangalore alone, out of this, 179 were teenagers. In a 2012 report, student suicides had increased by 26%! Many post-exams. Also studies show that for every student who commits suicide, there are at least 13 who attempt suicide! (Must be a horrible feeling to fail even at that).

Academic pressures stems from the steady devaluation of the ‘degree’ which has led to ‘academic inflation.’ Few decades ago, a High School and a Diploma could get you a good job. Soon too many had them. Then an under-graduate degree made you special. Soon there were too many of those also. Then it was a Master’s degree that set you apart. Now that too is no longer special as some have double Master’s. And well, Ph.Ds are no more worthy.

In an economy where even a basic degree is becoming passé, our education system too will have to change. It cannot continue to stigmatise talent that is not “employable” for soon creativity, passion and entrepreneurship will become viable, sustainable and profitable. It cannot make a PUC exam the end-all and be-all of life.

But what is fantastic news is that so many girls topped the charts. In Commerce, of the top 10, eight were girls; in Arts, seven were girls and Science, six. Ah! With results like this guess our Prime Minister may not have to work hard to push for “Beti Bachao” programme, the “betis” are not only saving themselves by excelling in academics but also their families with a prosperous career. Soon… parents would rather have betis than betas. Who knows, half a century later there may be a “Beta Bachao” programme.

For now, high marks are the only way to get into a professional stream, seen as the only path to prosperity in a nation that doesn’t particularly nurture entrepreneurship, but until then… at least let the kids know: You don’t flunk life just because you flunk an exam.