Home » Columns » Down… but not out 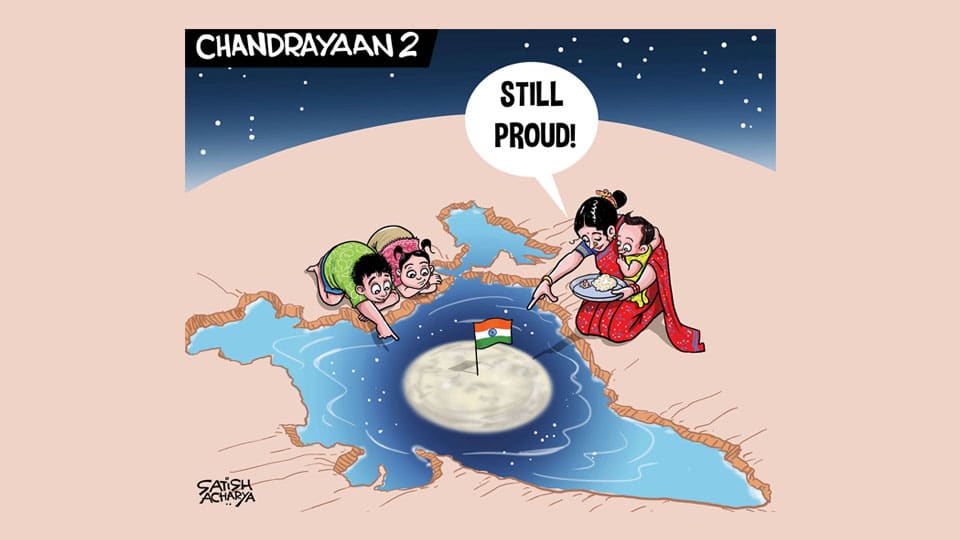 Down… but not out

Last night, many who were waiting for that moment of glory and pride were left screaming “Vikram yellidiyappa…” as the Moon Lander lost communication with the ground station of Indian Space Research Organisation (ISRO).

While Vikram remains incommunicado leaving many disheartened, it has reignited enthusiasm and curiosity among Indians, both young and old, about Space Science and science in general.  The last time some of us felt this way was 35 years ago.

In 1984, I wore a large white full-face helmet, a white puffy jacket with the Indian flag patch sewed to the arm and puffy pants stitched by my mother. I had dressed as Rakesh Sharma for the annual school fancy dress competition because on April 2, 1984, Rakesh Sharma became the first Indian to travel in space and there was great jubilation and national pride.

By the way, India has another cosmonaut other than Rakesh Sharma, his name is Ravish Malhotra. He was the backup for Rakesh Sharma and trained along with him in Russia. But alas history has forgotten him.

Rakesh Sharma’s space travel also triggered a lot of interest in space science and many youngsters pursued this as a career option. When we saw numerous ISRO personnel sitting in front of computer screens at the Mission Operations Complex (MOX) yesterday most of them looked like they were from the Rakesh Sharma enthused era. May be, as much as ISRO wanted this Moon landing, India needed this re-ignition of scientific interest. For far too long, Indian education has been catering for “employment” rather than “excellence”.

Many wonder why a nation like India must explore the Moon or even have a space programme. Well, it’s not just about being explorers, being in the ‘space race’ or national pride, it’s also about science and making life better here on Earth. Thousands of space science inventions and tech-innovations have been used on Earth.

To give an example, the cooling suits used by astronauts today is used to help people with multiple sclerosis whose symptoms are exacerbated by heat. Infrared ear thermometer, Cochlear ear, Lasik eye surgery and even invisible braces own their existence to space tech!

Even in the transportation space anti-icing system in aircraft and radial tyres are space tech. Then we have inventions such as enriched baby food, freeze-dried food, cordless vacuum cleaner, fire resistance fabric, even something as simple as the exercise machine Bowflex, all these were born out of scientists inventing technology for space exploration.

ISRO is not far behind. Since its inception, ISRO has transferred over 300 space technology innovations to Indian industries. This year, ISRO formed a company named ‘New Space India Limited’ (NSIL), a Public Sector Undertaking (PSU) that will commercialise its innovations and technologies.

Yesterday’s achievements also show what happens when a professional runs an institution, instead of a bureaucrat. Also there was something interesting in how ISRO Director Dr. K. Sivan reacted to the loss of Vikram this morning as he was hugged by PM Modi and sobbed his heart out.

He probably saw himself as having let the country down and broke down even though there is so much to be proud of. I wonder if any bureaucrat heading any PSU can ever have such an emotion and a sense of personal responsibility and accountability.

Also, the visuals of the control centre were very interesting. It was a floor filled with ordinariness, doing something extraordinary. A room full of very middle-class, middle-aged bright Indians doing something world-class and space-aged without pomp or “attitude”. It was a very humbling sight, a reflection of ordinary hard-working Indians — humble when praised and calm in disappointment. Even more beautiful was the sight of women-to-men ratio. There were just about as many women as men in that control room. Also, two women seem to be dominating the proceedings, one of whom is from Mysuru! You will hear more about her in SOM soon.

The only people who were going over the top were as usual the media.  One TV channel even declared that Vikram had landed on the Moon! And the very next line said, “Communication lost”. Another channel had a panellist who had brought an obstruction-sensing toy car wrapped in a gold foil to show how the rover would move. One channel asked the Indian ambassador to Madagascar K. Abhay to read out his ‘Moon Anthem’. Then there was a lot of media coverage for the Shillong Chamber Choir, which was supposed to sing a special version of Vande Mataram as Vikram landed.

It was all over the top, self-congratulatory and needlessly over-confident of success. It would make one cringe and scream “can’t you’ll wait till we land please”.

For now, as we hope and wait to hear from Vikram, we might as well listen to the advice of our Prime Minister who said “There is no failure in science, only experiment”. I wonder what a PUC student who has taken PCMB has to say to this.