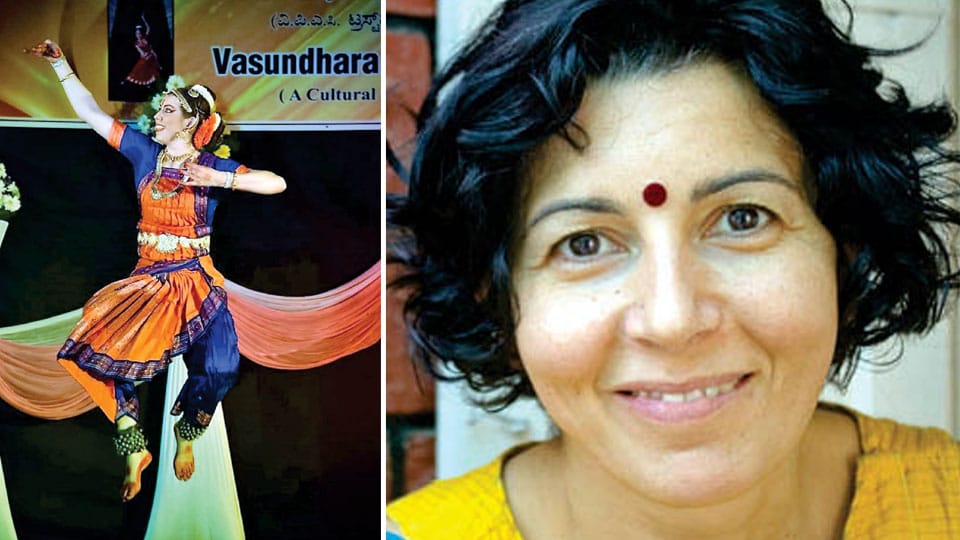 Instilled with the necessary ingredients of Tanjavur Style, and being finely molded by the renowned and committed teacher, Dr. Vasundhara Doraswamy, she performed in a systemic and traditional fervor well-becoming of a seasoned artiste.

Rich presented melaprapti (chaturashrajati) in praise of Lord Ganesha, culminating in obeisance to the Guru.

Nrityanjali is a modified version of alaripu. Addressing the Sun God, the artiste incorporated Suryanamaskara admirably.

Acid test of the competence of a Bharatanatya dancer is her performance of a varna. Rich exhibited refined artistry, emotive expressions, unremitting commitment and sustainable endurance in a padavarna, Kotipunyamu (portraying virahotkanthitanayaki) composed by SreedharanMundanghat. She commenced with charana and then progressed into the pallavi section. The nrittapassages, imparted sprightly momentum for the composition. Nritya sections emerged with finesse and softness.

Her penchant for Indian art forms

Gemma D’Alessandro, Artista Italiana, belongs to a rare group of artists who have a penchant for Indian art forms, Indian literature and theatre, including its deep, intricate and diversified culture. She is a mathematician, a photographer and an actress as well, from Milan, Italy.

Even with a piece of ordinary paper and any available pencil, Gemma, endowed with remarkable skill, imagination and vision, sketches with precision, and the strokes need no corrections or modifications. Portraits thrive on the enlivened eyes.

Gemma was in Mysuru before going to Kundapura, Udupi  district,  in pursuit of her studies on Religious Places of Worship with special reference to local Deities, very commonly worshipped in the coastal areas of Karnataka.

On behalf of SOM, Dr. V. Nagaraj spoke to Gemma at a dance concert in Mysuru where she was drawing pictures. Excerpts:

SOM: What is the purpose of your visit to Mysuru?

Gemma: Mysuru is the only place where I could explore my spiritual pursuits, to my satisfaction. I started with usual yoga, and now more interested in the spiritual aspects of yoga than its physical aspects, and now more into deeper studies on Pathanjala Yogasutra-s and other Darshana-s. I have been visiting Mysuru since more than ten years for this purpose.

SOM: Is your spiritual quest connected with study on lesser known deities?

Gemma: Yes. While I was studying Indian spiritual subjects I came to understand that there are Gods and Demigods existing in different planes of this creation, and they impart influences on all beings. My teacher calls it a spiritual ecosystem, where in all the beings in various spiritual planes interact among themselves directly or indirectly, and this creation continues in its various dimensions and manifestations. This prompted me to delve deeply into the study of these deities which are integral parts of Indian Culturo-spiritual milieu, irrespective of castes or creeds. I have also found that these aspects have crossed even the barriers of religions in India.

SOM: Since when you are into drawing?

Gemma: My first drawing was at the age of three. It gradually evolved with perseverance and encouragement. I belong to a family of singers since generations. My father’s hobby in photography had strong influence on art drawings.

SOM: Do you have a teacher?

Gemma: I do not have a formal teacher in my artwork. It has always been intuitive and spontaneous. And it worked.

SOM: What is your specialisation?

Gemma: I do pencil sketches, pen sketches, water color and acrylic paintings. I am interested in street sketches, landscapes, portraits, monuments and architecture. I do wall paintings as well.

SOM: Your sources of inspiration?

Gemma: My first source of study is human emotions (with emphasis more on feminine sentiments). I like to connect emotions with the nature. After all, mind and emotions are inseparable from nature — we are not different from this cosmos, nor we are independent of it.

Indian mythology has a great influence on me in drawing various deities and temples.

SOM: What are your observation on Indian Culture?

Gemma: I have traveled many places in India, and there is life in every aspect of Indian culture. The people are lovable and hospitable, which is very rare in other countries. Though there are many religions, they strongly bear a common stamp of Indian culture. I found that the actual Indian society is very different from what it is being projected by many vested Indian and Western media: I can distinctly find more peace and harmony in India.