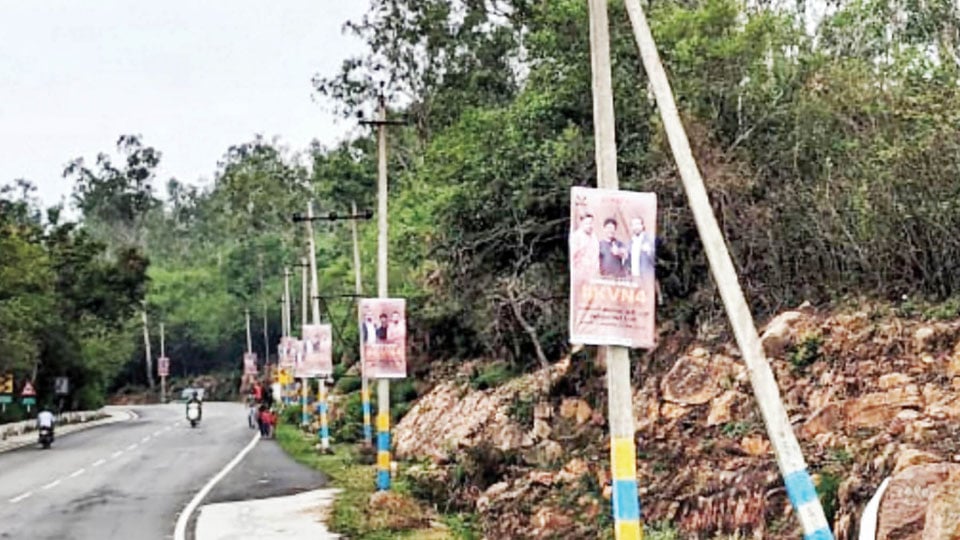 Mysuru has been called a Royal Heritage City, but it feels like we’re living in ‘Flex city’ for a while now. Our city is suffering the menace of flex hoardings and banners everywhere — at Circles, on buildings, on footpaths and on trees. Now they’re climbing up the hill!

Two weeks ago, the muhurat of a Kannada movie was held atop Chamundi Hill. To mark the occasion, the movie’s flex posters were stuck all along the road, all the way to the top of the Hill. An ugly sight indeed.

Flex menace in Karnataka is so pervasive that in 2019 an artist named Ravikumar Kashi wrote a book titled ‘Flexing Muscles’ about the flex culture, especially in Bengaluru. We have the same in Mysuru too.

Every two years, the Mysuru City Corporation (MCC) tells us that they will rescue our city from the menace of flex banners and posters. They even had the audacity to declare Mysuru as being ‘flex-free’! Now there is talk of ‘fines’ against flex ban violators, but we feel the MCC and District Administration doesn’t have enough muscle to flex against flex banners.

Why so cynical, one may ask? How can one not be considering that this farce is played out every two years?

In August 2014, the Urban Development Ministry announced that it will fine ‘heavily’ those who erect unauthorised cut-outs, banners or hoardings! What happened? Nothing.

In 2009, MCC  started an ‘illegal hoarding drive’ to which some people protested, and the drive was stopped. In 2011, MCC Council passed a resolution banning hoardings in the core heritage areas with the then MCC Commissioner K.S. Raikar said, “We held discussions with the City Police Commissioner, who has agreed to file cases against those violating the MCC directive on advertising hoardings and flex boards.” What happened? Nothing.

This ineffective drive by authorities has emboldened many, and now our Circles and trees are not safe. Circles in Mysuru have been turned into medieval town centres, places for all announcements, be it death, election or festivals.

Most flex banners are also visual pollution, especially political hoardings. They are huge, with the ‘senior’ politician at the centre of the poster and his chamchas grinning from his stomach, chest and forehead. The politicians say they cannot stop this as their supporters want to show their love!

A few years ago, Prof. Rajeev Gowda, the Congress MP who has been working with citizens’ initiative to keep Bangalore clean, called ‘Swalpa Clean-up Maadi,’ was caught off-guard when his own photo turned up on the city walls wishing him on his 50th birthday. When asked, he said, “There are people who want to wish me on my birthday. But they cannot pay Rs. 1 lakh for a billboard. We need to have a facility that will help people advertise without affecting the aesthetics of the city.”

READ ALSO  Fine us, but punish them

Rajeev Gowda is from the prestigious IIM, and we wonder why he couldn’t tell his followers to spend that money on a social cause instead of wasting it on posters wishing him.

Politicians can stop this menace. But they won’t because politicians thrive and survive on public perception of them being powerful. And showering the city with posters with supporters popping out of sensitive areas is one way of doing it.

Finally, the government itself becomes a violator of laws. They not only put up poorly designed and flimsy awareness posters but also stick their flex advertisements on hoardings that belong to private individuals! This happens especially during Dasara.

This menace of illegal hoardings cannot be stopped with fines; it can be prevented by ‘tearing down drive’ – just tear them down. Like the Police have Garuda for patrolling, the MCC can have ‘Giraffe’ — a jeep with a long ladder, like a giraffe’s neck. They have to drive in and around the city and tear down illegal banners.

While our administration constantly talks about the beautification of our city, they encourage the ‘uglification’ of our city by not implementing the law.

This morning it has been reported that the MCC has sent notices to a few political parties to remove their banners and buntings, but we know they will return unless you tear them down and tear them down now before Mysuru city turns into Flex City.