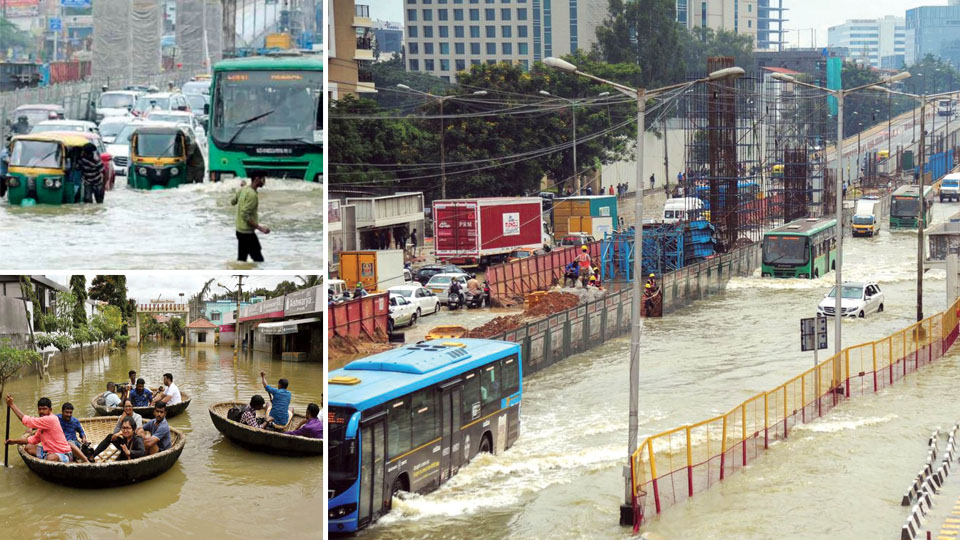 Flood of blames… but they’re all the same

Bengaluru flooded again, and no one was surprised. But the politicians acted like they were! That’s because floods, while a tragedy for the people, for politicians it was an opportunity to attack each other.

Did the former CM forget the 2017 Bengaluru flood, which killed 16 people, including an 18-year-old girl when he was the CM? Guess ‘selective memory loss’ is a disease that plagues all politicians.

Later, his party State President D.K. Shivakumar blamed the encroachment of Government land for the floods and asked, “What stopped the ruling BJP from clearing the encroachments”?

We have to ask, what stopped Congress Party from clearing the encroachments when they were ruling our State for five years until just two years ago? Even now, what solution or action plan has any party come up with to make sure it doesn’t happen next year?

Also, if Congress rightly feels encroachments cause flooding, then why not declare that all structures built on lakes and Raja Kaluves (drains) will be demolished? Make this a promise in your election manifesto.

The Congress organised a protest against the failure of the BJP Government to handle floods. Later the BJP CM said, “The mistakes committed before in the name of development should not be repeated. For this, it is necessary to probe… which political forces ensured encroachment of lakes; which officers executed the task.” After this statement, the Opposition Congress became silent and went back to stitching up India — Bharat Jodo Yatra.

The Congress should have a Bangalore Bachao Andolan instead. After all, the Karnataka State Congress President and the CM hopeful D.K. Shivakumar knows a lot about urban planning. He was the Urban Development Minister when the IT boom thundered across Bengaluru.

While all political parties are attacking each other over flood management, it has been 16 years since the ‘The Captain Raja Rao Committee report on road construction and management of primary, secondary and tertiary drains – 2006’ was presented. Not one political party has bothered implementing it during their rule, despite the High Court’s direction to implement the recommendations!

Our politicians’ intention to improve Bengaluru is as murky as the city’s filthy flood water. Only serious protests will bring change.

Lakes and drains helps us live with rains

Drain and Lake Systems are crucial in urban development. The simple example of Spice Garden Layout in Bengaluru gives one an idea of its importance.

The encroachment of the Raja Kaluves of the Bellandur Canal caused flooding in this layout. If only the 6.5-kilometre Raja Kaluve had not been            encroached, the rainwater would have drained into the canal, which would carry it from Bellandur to Varthur Lake and then exit into the Dakshina Pinakini River. There would have been no floods at all, but alas.

Bengaluru was once called ‘The land of a 1,000 lakes’. Today it is number two on a United Nations list of cities that will run out of drinking water in the next 15 years! So it needs to find ways to harvest and save water — time to look at our past and learn.

Bengaluru has no perennial river close by, so lakes became the mainstay for Bengaluru’s survival. But since it had altitude, Bengaluru is 3,000 feet above sea level, both Kempegowda, the Founder of Bengaluru and later Lieutenant-General Richard Hieram Sankey (after whom Sankey Tank is named), developed a system — Cascading of Lakes.

This was a natural rainwater harvesting system wherein the run-off water (rainfall) was collected first in the lakes at the higher level. Once these filled up, they flowed to the lakes on the next level via 30-ft wide inlets called Raja Kaluves which then flowed into the four natural drainage valleys of Bengaluru — Challaghatta, Koramangala, Hebbal and Vrishabhavati.

The system was so efficient that when the Captain of the British East India Company came to Bengaluru, he described it as the ‘Land of a thousand lakes.’

Even today, in the Revenue Survey maps of Bengaluru, there are 937 lakes listed. But the shocking fact is that on the ground, there are only 17 ‘live’ lakes left!

Our Government does not understand the importance of lakes in making a city liveable. That is why the Government irresponsibly constructed a hockey stadium on Akkithimmanahalli Lake, converted Dharmabudhi Lake into Kempegowda Bus Stand, turned Sampangi Lake into Kanteerava Sports Complex and built a National Games Village on Koramangala Lake! When the Government itself sees lakes as potential real estate…our cities will flood.

As flooding becomes an annual affair in Bengaluru, Mysureans better prepare their activist boots, or else we too will be in the ‘same boat’ as Bengalureans.

As the 10-lane expressway and airport gain traction, we will see construction and corruption. When big builders appear, lakes disappear. They already are.

In 2019, Lake Conservation expert U.N. Ravikumar of Mysuru reported that our city had 106 lakes. Out of this, 37 lakes had disappeared and 69 are alive. But he added that 42 lakes in Mysuru taluk are on the verge of depletion, out of which 22 fall under Mysuru City Corporation (MCC) limits. Yet there is no clear action plan to save them.

For long now, small lakes in Mysuru have been quietly filled with construction debris. Once filled and levelled, the land-grabbers create fake papers showing ancestry and ownership, after which it is sent for approval! And it gets approved. No surprise there.

In Mysuru, many grand lakes have been killed by an indifferent administration. Jeevanna-rayana Katte, which is now called J.K. Grounds, was a small lake. It went dry as buildings came around it, and the feeder channels were blocked. Then there is Doddakere Maidan in front of the Palace; it suffered the same fate.

Subba-rayana Kere in front of Shantala Theatre also used to be a lake; now it’s dry too. Even the channels to Kukkarahalli Lake are covered up, and freshwater is not coming through. Instead, sewage water does.

Then there are other lakes in the city that have been slowly encroached upon, like Lingambudhi Lake near Vivekananda Nagar, Devanur Kere in N.R. Mohalla and lakes on Nanjangud Road. Even Kukkarahalli Lake has been encroached as the University of Mysore has built various structures on the banks.

Numerous water bodies on the outskirts of Mysuru going towards Hunsur have been covered, and now Choultries sit pretty on them.

Even the Yelethota that leads to Nanjangud Road was a swamp that sucked up water; it is now being sold to builders. So where is the rainwater supposed to go? Obviously, into our homes.

Karnataka is facing severe leadership issues. It would be too much to ask for ‘honest leadership’, but it’s fair to expect an administration with a plan. But then, when half the State’s Cabinet and almost 60 percent of our cities’ Corporation members are into real estate, urban planning will come only after their personal wealth planning.

At this rate, along with raincoats, umbrellas, candles and UPS, we better keep life jackets and maybe even buy a tiny coracle for when it floods. But knowing our greedy lawmakers, they may introduce water tax like road tax for the coracle; a rowing fee and even make us pay to get a rowing license. God help us.