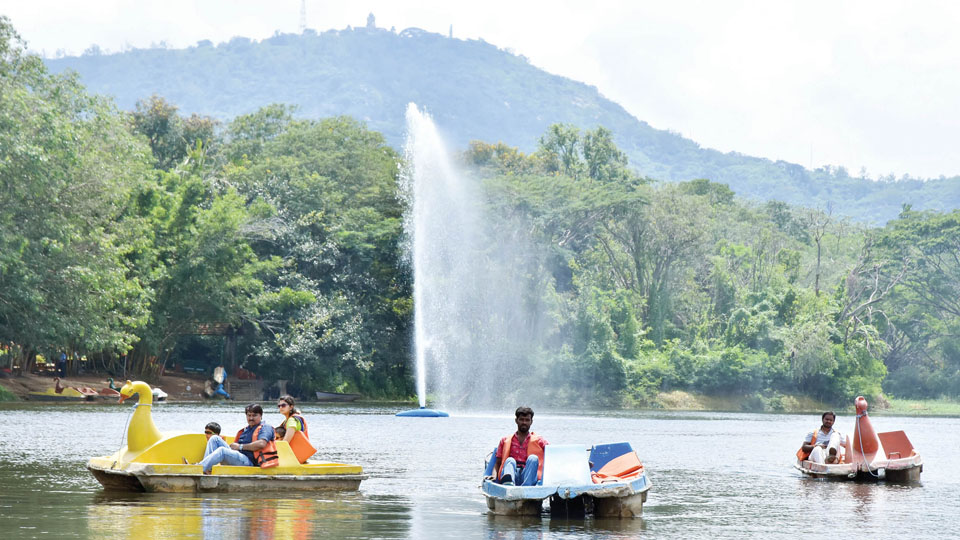 Sadly, the recent Mysuru DC’s episode quite clearly indicates that Mysuru is well on its way to becoming a milder, yet repulsive version of Bengaluru rather than a paler, yet beautiful version of Paris as we had hoped.

Just look at Bengaluru, a city that was once called  ‘The land of a 1000 lakes’  and known world over as the ‘Garden City’, today is number two on a United Nations list of cities that will run out of drinking water in the next 15 years ! s

Our kings and “oppressors” took better care of our cities than our leaders in Independent India do. Bengaluru has no perennial river close by so lakes became the mainstay for Bengaluru’s survival. But since it had altitude, Bengaluru is 3,000 feet above sea level, both Kempe Gowda, the founder of Bengaluru and later Lieutenant-General Sir Richard Hieram Sankey (after whom Sankey Tank is named), developed a system — Cascading of Lakes.

This was a natural rainwater harvesting system wherein the run-off water (which is rainfall), is collected first in the lakes at the higher level, once these filled up it flowed to the lakes in the next level via 30ft wide inlets called Raja Kaluves.  When this second level lakes also filled up, the surplus flowed to the third level of lakes and so on till the excess water from the last level of lakes flowed into the four natural drainage valleys of Challaghatta, Koramangala, Hebbal and Vrishabhavati.

The system was so efficient that when the Captain of the British East India Company came to Bengaluru he described it as the ‘Land of a thousand lakes.’ Even today in the Revenue Survey maps of Bengaluru, there are 937 lakes listed. But the shocking fact is that on the ground, there are only 17 “live” lakes left!

In 2013, V. Balasubramanian, a former Additional Chief Secretary, Government of Karnataka, submitted an in-depth report titled “Death of Lakes and the Future of Bangalore”  in which he notes,  “Information Technology boom has caused the land value to go up by 350 times which has resulted in land grabbing by land mafia, politicians, bureaucrats and citizens. There are now only 189 tanks that are “live” according to the BBMP. But these “live” tanks are only storing sewage waste water which is causing groundwater contamination.”

May be, that is why Rohini Sindhuri, Mysuru ex-DC, declared protection of Government land and lakes along with tourism development as her priority for Mysuru.

In 2019, Lake Conservation expert U.N. Ravikumar of Mysuru reported that our city had 106 lakes out of this, 37 lakes had disappeared and 69 are alive.  But he added saying that 42 lakes in Mysuru taluk are on the verge of depletion out of which 22 fall under Mysuru City Corporation (MCC) limits.  Yet there is no clear action plan to save them.

For long now, small lakes in Mysuru are being quietly filled with construction debris. Once filled and levelled, the land-grabbers create fake papers showing ancestry and ownership, after which it is sent for approval!

As Mysuru grows, lakes will become important. Lakes can ease the impact of floods and droughts by storing large amounts of water while also replenishing groundwater. Already the depth to which we have to dig a borewell for water has gotten deeper. It will only get worse if we do not preserve our parks and lakes. This means we need an organisation for urban planning…oh! but we do have one, it’s called MUDA (Mysuru Urban Development Authority).

The MUDA preamble states, “To promote well- planned and well-designed urban development…making available environment-friendly and affordable housing using state-of-the-art technologies to all strata of society”. But the irony is  that in 50 years the MUDA has allotted a little over 50,000 sites; meanwhile in just 20 years, Private Developers have distributed 70,000 sites!

Unfortunately, MUDA over the years has merely become an approval body for Private Layout Developers. Even more shameful, some of the layouts they have developed and delivered are now being questioned after almost 50 years, half a century later! Case in point Siddartha Layout, which was delivered by CITB  (now MUDA) in 1973, 48 years ago! and K.C. Layout, which was delivered in 1994, 27 years ago! How can a Government body retain its legitimacy if this is its legacy?

Recently, there were allegations made by the former DC against MUDA Chairman H.V. Rajeev, a Government appointee. Shockingly, there was no sound from the Opposition party?

Usually when there is such a serious allegation of encroachment and land-grabbing by a DC, the Head of all Revenue matters in a district, against a ruling Government appointee, in this case the MUDA Chairman, one would expect the Opposition party to jump at it, call for investigation by an independent body and do everything in its power to embarrass the ruling Government and protect public land. But here the Opposition is Shhhhhh…silent,  Why?

Also interesting to note is that of the 25 members in  MUDA, there are only 4 technical persons — City Planning Officer, MCC,  Executive Engineer, MCC, Superintending Engineer, CESC and Executive Engineer, KUWS&DB! How can our city be ready for growth? Where are the world-class technocrats?

Meanwhile, the MUDA says they have paid top lawyer Harish Salve Rs. 24 lakh as fees to defend it in Survey No. 4 case as per ex-DC orders, as if to bring a bad name to the ex-DC who hired his services. Does this mean MUDA wants to discontinue Harish Salve’s services? Then what, lose the case ? Is that the idea?

Also has MUDA seen the lawyers fighting for the other side? It is Abhishek Manu Singhvi, senior Supreme Court lawyer, Congress MP and its Spokesperson. Along with him is Mukul Rohatgi, former Attorney General and Basava Prabhu Patil, son of former Justice Shivaraj Patil. This being the case, shouldn’t the Government have a strong lawyer like Harish Salve to protect Government land? Does the Government want to lose the case? Why is the Opposition quiet?

This reminds me of George Bernard Shaw, who said, “A Government which robs Peter to pay Paul can always depend on the support of Paul.”  So dear Mysureans, wake up, don’t be Peters.

If our city is to be saved from going the Bengaluru way it cannot be left to the Government alone to take action. Because today expecting the Government-appointed Chairmen and Officers to protect our land, is like expecting a fox to guard the hen house.  It has failed across the country.

May be, it’s time some NGOs started filing PILs  and start crowd-funding to pay for these important battles like it is being done in Bengaluru.

Meanwhile, may be every Mysurean can write to the PM and remind him of what he told Mysureans on the afternoon of April 8, 2014. He said, “I have come with a decision. Why shouldn’t we dream? Like annually many tourists come to Paris for “my” Mysuru too I will bring the same number of tourists. …Brothers and sisters…You have everything…the problem is that the people in Delhi do not see.”

Well, let us write to the PM and hope that he sees how Mysuru, rather than becoming like Paris, is set to perish.