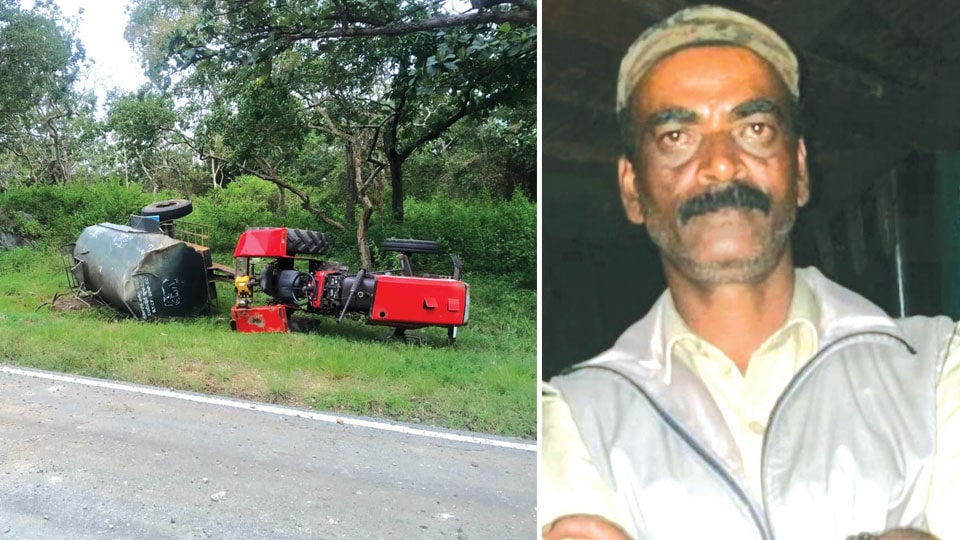 Gundlupet: A 53-year-old contract employee at Bandipur Tiger Reserve died at a hospital after the tractor, which was supplying drinking water to an Anti-Poaching Camp (APC), turned turtle last afternoon.

The deceased is Palani, who was working at Bandipur Tiger Reserve since about 10-15 years.

Last afternoon, Palani, along with Ravi, Jayappa and driver Bomma, were proceeding on Bandipur-Mudimalai Road to supply drinking water to the APC at Olalallare, when the driver of the tractor lost control of the tractor at a slope, resulting in the vehicle turning turtle. Palani, who came under the tractor, when it turned turtle, suffered serious injuries and was being rushed to Gundlupet General Hospital, where he breathed his last midway. Luckily, Bomma, Ravi and Jayappa escaped with minor injuries.  Post-mortem was performed last evening and the body was handed over to the family members, who performed the last rites yesterday.

Meanwhile, Bandipur Project Tiger Director T. Balachandra, speaking to Star of Mysore, said that the Forest Department lost a good employee and added that Palani’s family members would be getting Rs. 6 lakh Insurance amount and Rs. 4 lakh PF amount. He further said that it is for the first time in the State that contract employees are covered with insurance and provided PF facility besides stating that there were 222 contract employees at Bandipur who are covered with insurance and with PF facility.