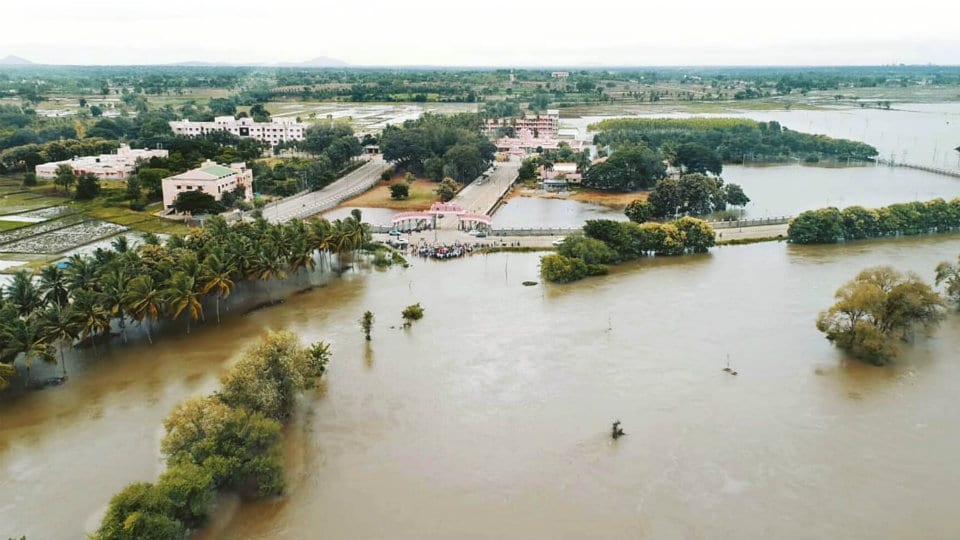 Floods, the language of Nature

Our sages anticipated this, hence the Vedic references to the maha pralaya that would trigger, at the end of the chaturyuga, cataclysmic events that wipe out all life on the planet.

Kempegowda, the Founder of Bangalore (now Bengaluru), had received clear instructions from his mother: “Build lakes, plant trees.” He did that, making a hundred lakes without disturbing the undulating terrain and lining pathways with leafy trees. The result was a city unlike any other.  With parks and waterways, human settlements and market places forming an integrated whole, Bangalore became a verdant, healthy and beautiful urban centre.

Then came Democracy. Which brought in elected representatives of the people, more powerful and less worthy than Kempegowda’s mother. They went for a magical, mystical wonder called development.  In about three decades they filled up 2,000 hectares of lakes. In the late 2000s alone, they felled 50,000 trees. In Southern Bangalore, a housing society rises proudly from what was once the centre of a picturesque lake. Development was so impressive that before people knew what was happening, Bangalore’s urban sprawl became the largest municipal corporation in the country.  Water scarcity has already begun in parts of this megalopolis. Experts predict that evacuation of people from Bangalore may not be far away.

Floods that have devastated vast regions of India in the last couple of months are a reminder of the catastrophe to which development is leading us. Floods are a language through which Nature speaks. Humans understand the language — and, greedy for development, ignore it. Hence the likelihood of the world ending in a maha pralay rather than in fire, under a sheet of ice, or global warming due to global misuse of resources.

This time, Nature has been speaking quite bluntly. From Himalayan resorts like Shimla to even desert destinations like Pushkar in Rajasthan, floods became a threat. Landslides buried humans under muddy debris from Uttarakhand to Kerala. Hundreds died, mostly in Kerala, but also in Karnataka, Maharashtra, Assam, Bihar and Gujarat.

We need to note that this is a recurring affair. Uttarakhand was devastated by a cloudburst in 2013 that was rated as the worst natural disaster since the 2004 tsunami.  The floods that ravaged Kerala this year was a repeat of last year’s tragedy. Every year 2,000 lives are lost to floods and 80 lakh hectares of land devastated.

This will go on because our kind of “development” destroys the balance of nature. Paddy lands are turning into housing colonies. Rock formations are disappearing under the relentless onslaught of the quarry mafia. There are construction mafias, sand mafias, brickmakers’ mafias and, from the time of forest brigand Veerappan, a flourishing granite mafia.  What chance has Nature against these powerful entities each of which flourishes under political patronage?

Two years ago the Kerala High Court specifically ruled that natural drains and streams should not be obstructed by developers and builders. That remains on paper.  Wetlands continue to disappear, sometimes even under government auspices “for road building.” It is useful to note that in Indonesia the rising sea is threatening the densely populated Java Island and there is talk of the capital being moved from Jakarta to Kalimantan in the rugged Borneo island.

Last week waves lashing the Marina Beach in Chennai appeared to be on fire. The waves were spectacularly blue and sparkling, something that had not happened in living memory.  Informed speculation is that the “ignited’ waves are indicative of climate change and warming of ocean currents. The vision no doubt delighted citizens but scientists were worried.

READ ALSO  The Best and the Worst on Show

So what’s happening?  As we destroy nature, is nature destroying us? That, of course, will be an uneven fight. Nature exploding with anger will be a phenomenon none of our human mafias will be able to counter. Perhaps our sages anticipated this, hence the Vedic references to the maha pralaya that would trigger, at the end of the chaturyuga, cataclysmic events that wipe out all life on the planet.  Greek, Egyptian, Indonesians, Mexican mythologies have similar scenarios while the Bible and the Koran speak of the Great Deluge.

Religion can lead to stupidity as well. An American Pastor went public with the prediction that Jesus would return in 1988, then changed the date to between 2018 to 2028.  He gained a decade to think of some other ruse. According to a survey in Britain in 2015, as many as 23 percent of the people think life on earth would end either with a nuclear war or on account of artificial intelligence. Most significantly, they said the apocalypse would occur during their lifetime, that is our lifetime.

One way or the other, the end is nigh.