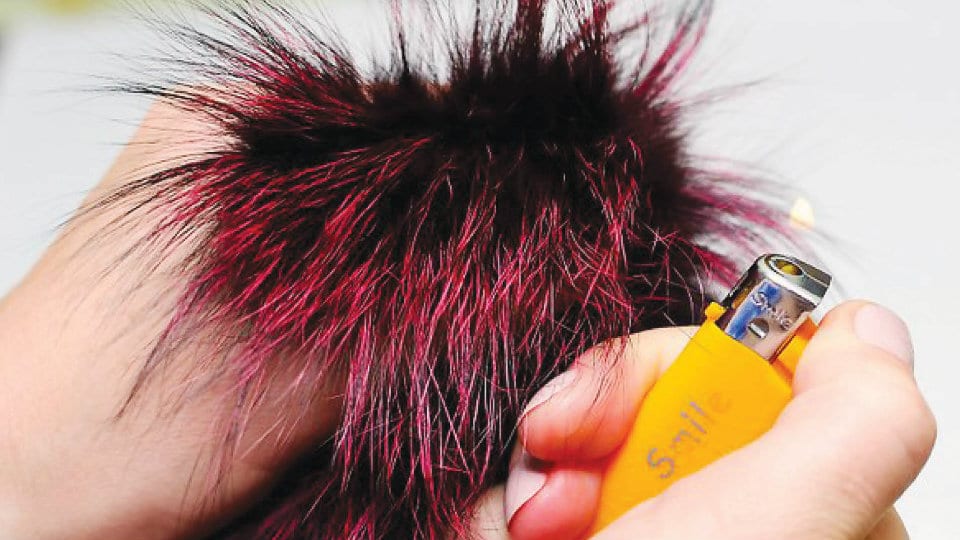 In this week’s Pet Talk, Maneka speaks about ammonia poisoning in aquarium, insects intelligence and about identifying real and fake fur.

How to treat ammonia poisoning in aquarium water?

If the ammonia level rises above 1 ppm, as measured by a standard test kit, begin treatment immediately. Lowering the pH of the water will provide immediate relief, as will a 50% water change (be sure to use water that is the same temperature as the aquarium). Several water changes within a short period of time may be required to drop the ammonia to below 1 ppm. If the fish are in severe distress, the use of a chemical to neutralize the ammonia is recommended. Feedings should be restricted so that additional waste is reduced. In cases of very high ammonia levels, feedings should be discontinued for several days. No new fish should be added to the tank until the ammonia and nitrite levels have fallen to zero.

Do birds sing with their throats?

Strange question but the answer is even stranger. Some birds make sounds with their feathers. The male Anna’s hummingbird is one of many species of birds that attract females with sounds generated by their feathers. Scientists know that when air hits certain feathers—at the right speed and angle—it causes them to vibrate. And this rapid oscillation produces sound.

A paper published in the Journal of Experimental Biology describes wing-singing in two species of small African broadbills. The researchers compare it to the “aroogah!” of a mechanical horn and note that the noise can travel more than 300 feet through dense forest. When the birds flap their wings in everyday flight, it is mostly silent. The feathers only produce the characteristic “brreeeet” when the birds want to be heard during courtship displays. Different parts of six feathers vibrate in concert, and the birds can still produce sound even if one is taken away.

Small, male long-beaked American woodcocks perform a “sky dance.” This involves a barrage of vocal “peents” from the ground before a burst of flight that unleashes whistling from the bird’s wings. The birds climb 400 feet, before adding another climactic vocalization and zig-zagging back to earth like a falling leaf. Woodcocks employ a combination of sounds made from both, their voice box and their feathers. These birds are actually playing the instrument that is their wings. The better the sound, the more likely it is that a female will be attracted. Hummingbirds make their music by shaking their tail feathers. These noises vary from a single, rapid “bleeeep” to fluttering notes that sound like a ray gun’s “pew pew pew.” Imagine if you could make music with your hair or beard.

What causes flatulence in dogs?

It is normal for gas to be produced and to accumulate within the gastrointestinal tract. However, in some situations this production of gas is increased and can become excessive. The most common cause of excessive flatulence is a change in diet, or from the dog eating something new or spoiled. Most cases of chronic flatulence are caused by a diet that is poorly digested by the dog. These poorly digestible diets cause excessive fermentation in the colon and subsequent gas formation. Soybeans, peas, beans, milk products, high-fat diets and spicy foods are all commonly associated with flatulence in dogs. Dogs and cats are lactose intolerant and if they are fed milk or dairy products they will often experience flatulence. Dogs that swallow air, especially those that eat rapidly, are more likely to experience flatulence. Overweight, obese and sedentary dogs are at higher risk for developing chronic flatulence, regardless of diet.

The most common clinical signs include: Expulsion of gas from the anus, with or without odour, mild abdominal discomfort, mild stomach distension or bloating, excessive gaseous sounds or rumbling from the abdomen.

Other diagnostic tests that may be required, to determine the cause of excessive flatulence, include faecal examination and evaluation, rectal cytology, faecal cultures, blood and urine tests, trypsin-like immunoreactivity (TLI), serum cobalamin and folate tests, abdominal radiographs, abdominal ultrasound, and treatment is based on diagnosis and commonly involves a change in diet. Diet recommendations include a diet that is highly digestible with a low fibre and fat content.

I bought my daughter a fur lined coat in England. The shop assistant told me it was fake fur otherwise I would not have bought it.

Unfortunately, many shops in England, which do not have a No-Fur policy, have been found selling real fur, cheaply bought from China and France where animals are kept in terrible conditions so the fur costs them virtually nothing. An investigation by the charity Humane Society International (HSI) found that British stores were selling supposedly fake fur but which was real. Fluffy “faux fur” clips sold by Boots were made from mink; a pompom keyring from Tesco and gloves from Fat Face were made from rabbit fur. Unfortunately, as labels can lie and trusted retailers can be found selling real fur as faux fur, consumers have to become their own fur detectives. It is wrong to assume real fur will be expensive — we are not talking full-length mink coats here. Much of the fur on sale in the UK is in the form of pompoms on accessories and trims on coat hoods, all with deceptively low prices. The appallingly poor conditions that animals suffer on fur farms mean real fur can be produced and sold more cheaply than faux fur. Here is how you can make out: The tips of the hairs in real fur taper and have pointed ends, whereas the hairs on faux fur are blunt where they have been cut in manufacture.

Look at the base. Part the hair to see how it is attached. Animal fur has a leathery backing because it’s attached to the animal’s skin, whereas faux fur will have a material woven backing. Hairs on real fur will also be different lengths, while faux fur tends to be more uniform.

Burn it. Not in the shop, but you could do it on something you already own. Trim a few hairs and set fire to them. Real animal fur singes; faux fur melts in a sticky way, cooling to form hard plastic balls, and will probably smell plasticky. Do not buy online. EU regulations state that “textile products” (that is clothes) containing fur should be labelled as containing “non-textile parts of animal origin”. However, this doesn’t need to be included in online product descriptions. In any case, both look cheap and ugly. Don’t buy real or fake.

When we talk about animal intelligence, are insects intelligent as well?

Far more intelligent. Take one example. No human mother can pass on information to her baby. But an insect mother, like a cricket who knows that she will not be around for her babies and wants to protect them from predators, gives them this information while they are in her womb. Researchers from the University of South Carolina Upstate and Indiana State University placed pregnant crickets in an enclosure where they were stalked, but not eaten, by a wolf spider. The young of the spider-exposed mothers turned out to be more predator-savvy than those with mothers who were not exposed to the wolf spider; they stayed hidden longer, and were more likely to freeze when they encountered spider faeces or spider silk. The research was published in The American Naturalist.