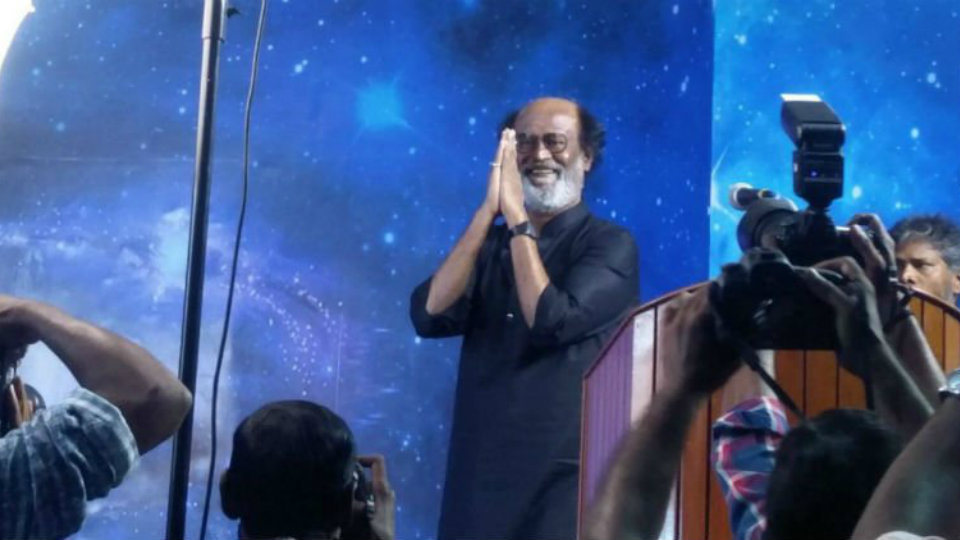 Rajinikanth meets his fans after a gap of 9 years

Rajinikanth to meet his fans in different batches till May 19. Says he won’t join politics or support any political party

Chennai: Superstar Rajinikanth met his fans after a gap of nine years at Raghavendra Mandapam here this morning. It is learnt that Rajinikanth will meet his fans between May 15 and May 19 in Chennai in different batches. Invitations have been sent to respective fan clubs to attend the various sessions  allotted to them.

Speaking on the occasion, Rajinikanth said, “I am not bothered by criticism. Today I need your support. Kochadaiyan and Lingaa did not do well but Kabali and Enthiran did. A film will work only if it has   good content.”

Reacting to rumours about him entering politics, the Superstar said that his accidental brush with politics happened 20-years-ago and since then many had been using his name for political gain. “People have been speculating for years about me joining politics. But I had made it clear back then only. I have never made any such announcement since then about joining politics. Nobody has my backing and I don’t support anyone. I am not joining any political party.”

“Some people have wanted to become MLAs and politicians and have been using me to make money. God decides what we have to do in life. Right now, he wants me to be an actor and I’m fulfilling my responsibility. If God wills it, I will enter politics tomorrow,” he said, assuring his fans that, “If I enter politics, I will be very truthful and will not work with people who are in this to make money.”

The fans have often asked their ‘Thalaivar’ (leader) to take the political plunge, even as he has been wooed by many political parties on account of his mass appeal.

Rajinikanth also made the most of the opportunity to send out social messages to his fans. The Star asked his fans not to smoke or consume alcohol stating that he was well aware of its affect on human health.

The ‘Superstar’ was slated to hold a similar meeting last month, but had postponed it on a request made by them for individual photographs for which more number of group interactions was required. The last such meeting with fans was in 2009, post his   ‘Sivaji’ success.

Rajinikanth will next be seen in 2.0, which is a sequel to the 2010 Tamil film Enthiran. The film also stars Akshay Kumar and it is the first time that Akshay and Rajini will share the screen space. 2.0 was suppose to hit the theatres this year on Diwali, but then the makers shifted it to next year citing better incorporation of visual effects.