Home » Feature Articles » The Dark Man on a White Horse 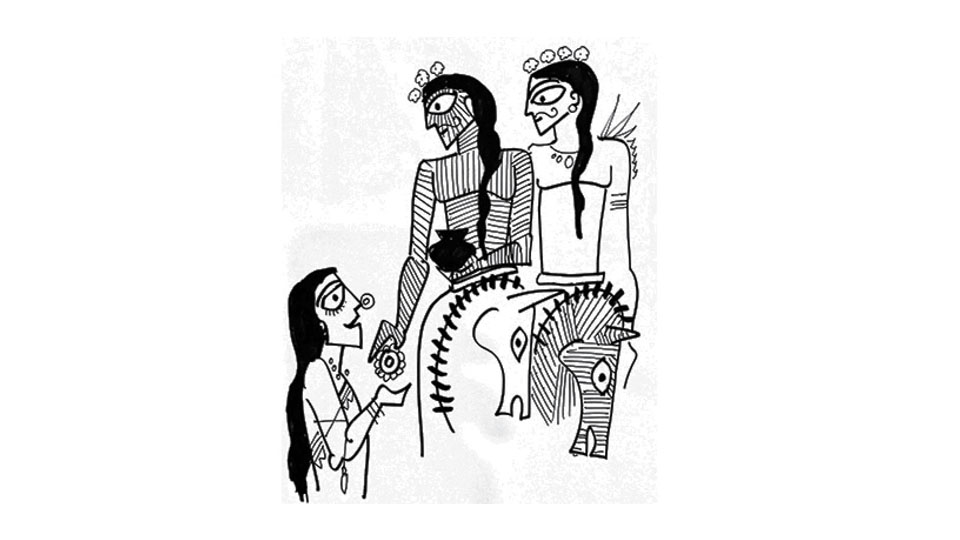 The Dark Man on a White Horse

Most Indians have heard about Somnath temple that was raided by Mahmud of Ghazni a thousand years ago. Very few know that in the same century, the Chola king from the South raided Odisha and Bengal and took back with him images of Shiva. Even fewer people know that in the 13th century, the Ganga kings of Odisha bravely fought the Muslim invaders of Bengal, and even established a “New Varanasi” in Cuttack, Odisha, since the “Old Varanasi” had been plundered.

Around this time, the giant temple of Purushottama was built, renamed the Jagannatha (Lord of the world) and the kings who built it declared themselves to be viceroy of this deity who was the true ruler of the land, the rashtra-devata. It was at this temple that Jayadeva composed his Gita Govinda that introduced Radha into Hinduism. There is some influence of Ramanuja’s Sri Vaishnava Vedanta School on the temple, as indicated by the independent temple to Lakshmi within the complex. But it also has Tantric rituals that give it a very unique local flavour.

Odisha is located towards the Northern end of the Coromandel coast of India. The word ‘Coromandel’ comes from Chola Mandala, or the kingdom of the Cholas, who clearly dominated the coast and the region ‘from Kalinga to Kanchi’ for a long time. Odisha’s wealth comes from the Mahanadi River basin. The Chola wealth came from the Kaveri (Cauvery) River basin and its control of the lucrative sea routes to Southeast Asia.

Between Southern Chola and the Northern Kalinga coast was the rich Godavari and Krishna deltas ruled by the Andhra kings. The kings of Odisha were traditionally known as the Gajapati, or the masters of the elephants. The Sultans of Delhi were called Ashwapati, or masters of the horses.

In the 16th Century, an Afghan army led by Kalapahada (black mountain) desecrated the Jagannath temple and burnt the images of the deity and plundered the vast treasury of the temple. But the kings of Khurda managed to restore the temple a few years later, and institute an innovative ‘regeneration’ ritual by which the deities in the temple could take ‘rebirth’ every few years, a practice that continues every few years till today, a reminder of the temple’s resilience.

These kings who withstood the onslaught of the Islamic invasion, were often in conflict with its Southern neighbours. Tales of battles between the Kalinga king and Kanchi king are stuff of legend. As per one tale, the king of Kanchi refused to let his daughter marry the king of Kalinga because the latter wielded the broom as part of temple rituals. Enraged, the king of Kalinga launched an attack on Kanchi.

On the way he met a milkmaid who asked the king to pay her for the milk and butter she gave two youths, one dark on a white horse and one fair on a black horse. She showed the king the ring the youths had given her, as proof of her sale.

It was the ring of Jagannath, indicating the Lord blessed the king’s attack on Kanchi. The Kalinga king won the war and the bride, who realised to be ‘sweeper of Jagannath’, was an act of humility of a king who was a servant of God, and God’s kingdom.

Marking this victory is a Ganesha image brought from Kanchi installed in the Jagannath temple complex.