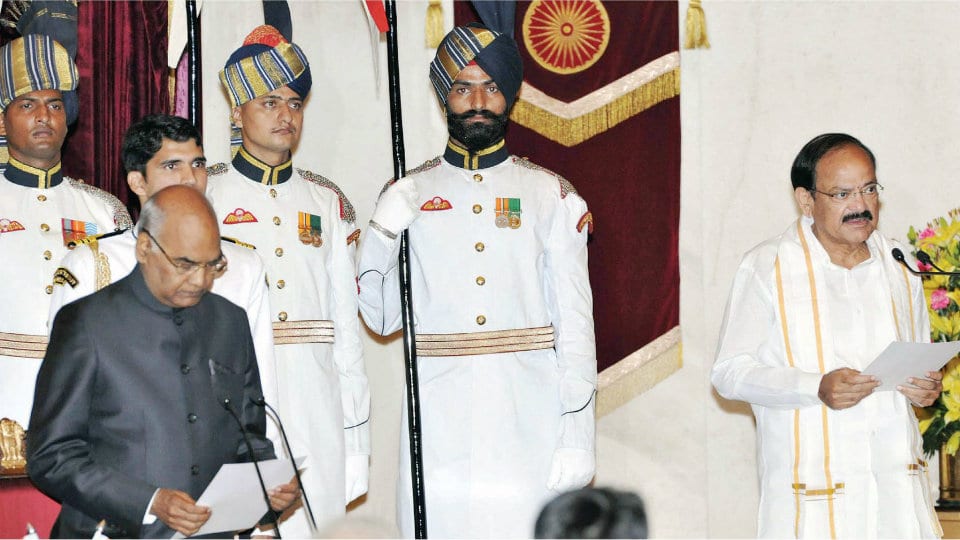 President Ram Nath Kovind administered him the Oath of Office. Following the ceremonial reception Naidu will take over as the Chairman of the Rajya Sabha.

Born at Chavatapalem in the Nellore district of Andhra Pradesh on July 1, 1949, Naidu is the second Vice-president from Andhra Pradesh. Before joining active politics, Naidu was much of a social worker. After completing his graduation, Naidu pursued law from Andhra University in Visakapatnam.

Venkaiah Naidu’s entry into politics was marked by his active participation in ‘Jai Andhra Movement’ of 1972. He was a swayamsevak in the Rashtriya Swayamsevak Sangh (RSS) and Akhil Bharatiya Vidyarthi Parishad (ABVP) in 1973 during his college days.

After the Bharatiya Janata Party (BJP) was formed in 1980, he became Vice President of its youth wing. He was leader of the BJP Legislature Party in Andhra Pradesh, State General Secretary and State Unit Chief.

He won the Andhra Pradesh Assembly elections twice in 1978 and 1983 from Udayagiri constituency and was made the BJP National President in 2002.

Naidu was elected as a member of the Rajya Sabha from Karnataka in 1998 and was re-elected twice in 2004 and 2010 from Karnataka.

He served as the Minister of Housing and Urban Poverty Alleviation and Information and Broadcasting in Prime Minister Narendra Modi Government before he was nominated for the post of Vice President.