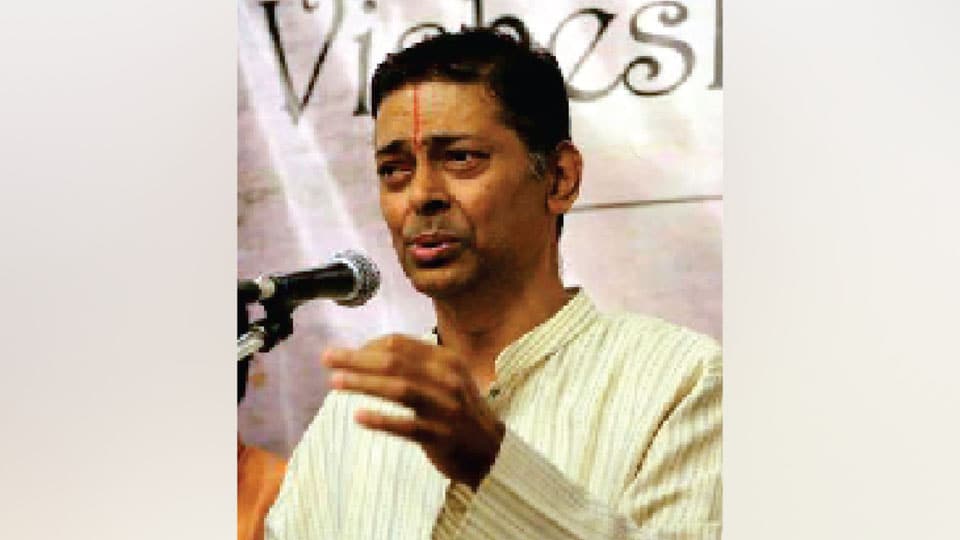 Vid. Prashanth is a B.E. in Instrumentation Technology and has addresses in Bengaluru and Mysuru. Pleasing personality with a pleasant voice, he will win the hearts of the listener connoisseurs by his sweet and scholarly rendering of the kritis.

Prashanth commenced his concert with ‘Namami Vidya Vinayaka’ in raga ‘Hamsadhwani’ quickly rendered but setting the agenda for nice jewels of kritis to unfold in a row. This was followed by a kriti in Raga ‘Nata’ by Swathi Thirunal. A short Kriti in ‘Kannada’  followed. A Tamil song in ‘Hindola’ was the next.

‘Arabhi’ was delineated in detail with a Saint Thyagaraja number ‘Oh Raajeevaksha…’ This was the best piece of the concert with equal contribution from the vocalist and the two accompanists. Mathoor Srinidhi with his subdued mannerism on the stage stole the show with the travel of the bow on the strings of the violin.

A Tillana in ‘Hamsanandi’ by Swati Tirunal Maharaja came out quickly, ‘Krishnaya Vasudevaya Devaki Nandanaya’ in ‘Desh’ followed and a neatly rendered Raga ‘Surati’ was reserved for the Mangala.

The laya vidya duo veteran Vid. Anoor Anantha Krishna Sharma and his nephew, the young Vid. Anoor Sunad Anand  gave a splendid display in their instruments. This was the piece-de-resistance of the concert along with the pleasant demeanour of the vocalist’s voice combined with the subdued bowing on the four strings by Mathoor Srinidhi.

Best concert in the series

On the 3rd April, Tuesday, the vocal concert by Vid. Vijaya Shiva was accompanied by Vid. R.K. Sriramkumar on violin, Vid. N.C. Bharadwaj on mridanga and Vid. M.R. Manjunath on ghata.

Vid. Vijaya Shiva has been a sort of a child prodigy who would identify and make efforts to sing several ragas even at the age of four. His mother was his first guru after whom he got good grooming and training in classical music under the famous D.K. Pattammal and her brother D.K. Jayaraman. This privilege put him on strong foundation due to which he is what he is today, perhaps the topmost vocalist in this part of the country.

The concert commenced with the inaugural number of the ‘Pancharatnas’ ‘Jagadananda Karaka’ in Nata bequithed to the musical field by the great Saint Thyagaraja. Vid. Vijay Shiva briskly went through the number in all its ‘Charanas’ with the solid support of his co-artistes.  The second song was ‘Samaja varada niku sari evarayya’ rendered quickly and followed by a Dikshitar Kriti ‘Meenakshi…’ in Purvikalyani.

‘Madhyamavathi’, the next raga was rendered with a short alapana, the kriti being ‘Baduk sukamula…’ The swara prasthara for this, though brief, was elegant. A short kriti ‘Mayamma Meenakshamma’ followed briskly.

‘Shankarabharana’ alapana was superbly rendered followed by Kriti, ‘Eduthaneela…’ Swaraprasthara in detail was quite good and after this Tanyavartana by Vid. Bharadwaj and Vid. Manjunath came out very well.  Surprisingly ‘Mathada Baradeno’ a Kannada number in ‘Kamach’ was rendered in slow speed and received well by the rasikas who had assembled in large numbers.  Another Kannada song ‘Neenyako, ninna Hangyako’ in raga ‘Janjuti’ followed in quick succession.

A tillana in ‘Surati’ penned by Balamurali was the next number. An ‘Abang’ by Saint Tulsidas in ‘Desh’ raga was the last piece with which the concert ended.

Undoubtedly, the assembled connoisseurs agreed in unison that this concert by Vid. Vijaya Shiva was by far the best concert in the series. The supporting artistes also came out in flying colours. This is what is called ‘Gatti Sangeetha’ in music parlance comparable to the concerts of Vidwans of previous generation like Ariyakudi, Chembai etc.

Note: This was the last number in 128th Sri Ramanavami Music programme.