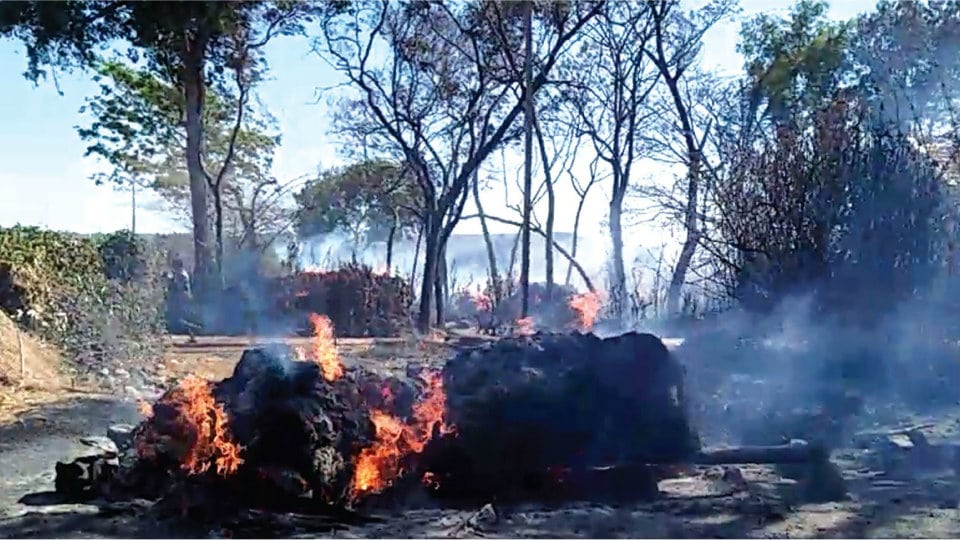 Chamarajanagar:  More than 25 haystacks were reduced to ashes in accidental fire at various places in the district and a CT scan machine at Ashwini Diagnostic Centre on Double Road has also been destroyed in a fire mishap last evening.

Fire Brigade personnel, who rushed to the spot, broke a portion of the wall of the diagnostic centre, managed to douse the fire and prevented the fire from causing further damage and spreading further. But by then, the fire had already destroyed the CT Scan machine worth about Rs.1.5 crore and also other machines and equipment.

At Amachawadi: Haystacks worth about Rs.20,000 belonging to farmer Bangarappa was destroyed in an accidental fire. Fire Brigade personnel, who rushed to the spot, doused the fire and prevented the fire from spreading further.

At Gundlupet: Accidental fire has reduced more than 25 haystacks at Kaggala village in the taluk besides damaging five houses at Dalit Colony in the village yesterday afternoon.

The fire mishap took place when the residents of the Colony consisting of labourers had gone to work. It is learnt that some had dumped ash along with red-hot coal into the garbage pit, which triggered the fire and the wind which carried the sparks ignited the haystacks nearby. Hay was stacked as fodder to the cattle.

Villagers, who noticed smoke emanating from the Colony informed the Fire Brigade personnel, who rushed to the spot and tried to douse the fire but the wind was carrying the sparks to other places resulting in fire being erupted in many places at once resulting in the water of the fire extinguisher getting over.

Soon, fire extinguishers were also summoned from Chamarajanagar, while the empty fire extinguisher vehicle had to refill from nearby agricultural ponds and lakes. It took nearly three hours for the Fire personnel to bring the fire under control.