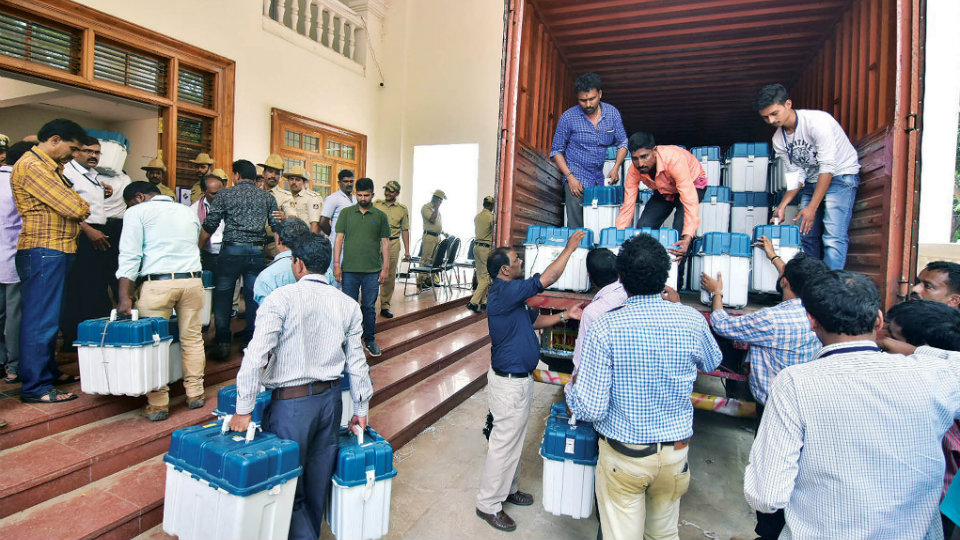 Two phase training for counting officials in second week of May

Mysuru:  The District Administration and Deputy Commissioner Abhiram G. Sankar, who is also the District Election Officer, have been making all arrangements for the counting of votes of the Mysuru-Kodagu Lok Sabha Constituency which will be held on May 23.

The fate of all the 22 candidates including BJP candidate Pratap Simha and Congress-JD(S) coalition candidate C.H. Vijayashankar will be decided on this day.

Counting of votes will take place at the new campus of Maharani’s College for Commerce and Management at Paduvarahalli, off Hunsur Road in its ground floor, first and second floor. The counting will begin at 8 am on that day. Early trends are expected to be available by 10 am.

The District Administration has also arranged training for these officials during May second week in two phases to sensitise them on the protocol to be followed.

Senior officials from the District Administration are reviewing the arrangements for counting of votes as per directions from Election Commission of India.

Electronic Voting Machines (EVMs) of the respective Assembly segments have been kept in strong rooms at Maharani’s College counting centre that has round-the-clock security and CCTV coverage.

Several dozens of cameras have been installed inside and outside the counting centres. Fire protection measures are also in place at the centre.

Barring election officials and media persons, mobile phones of others will not be allowed inside the centres on the counting day. The area around the centre will be barricaded to prevent public from entering. Only authorised persons carrying valid ID cards will be allowed inside.