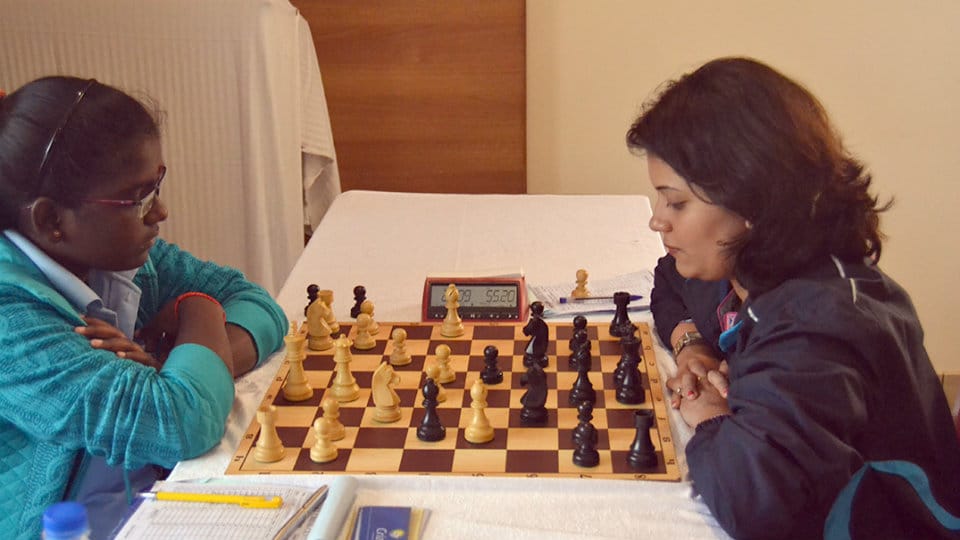 Top-seed WGM Soumya  Swaminathan (PSPB) and fifth seed Bhakti Kulkarni (Air India), won their respective games on the second and top boards respectively and are jointly in lead with 7.5 points each from nine rounds at the end of the seventh day in the 44th National Women’s Challengers Chess Championship organised by Mysore Chess Centre at Sri Kanteerava Narasimharaja Sports Club here yesterday.

In the biggest upset of the day, Tamil Nadu’s unseeded P. Bala Kannamma (6.5 points-rating 1977) playing a excellent middle and ending game on the fifth board with white pieces shocked the present Commonwealth Games Women’s Champion and third seed in the tournament WGM Swati Ghate (LIC-rating 2278) in 64 moves.

In another upset win unseeded Andhra Pradesh player G. Sandhya (Rating 1873-6.5 points), who had scored an upset win over WIM P. Michelle Catherina (TN) in the previous round, shocked WGM Aarathie Ramaswamy (Air India-5.5 points), playing with black pieces on the eleventh board.

WGM Mary Ann Gomes (PSPB) after her 42 moves win over WFM Arpita Mukherjee (WB) in the third board, is ranked third with 7 points from nine rounds. Ten players are tied with 6.5 points and are placed from fourth to thirteenth in the rankings after the ninth round.

Playing on the top board with white pieces, over-night joint leader from Tamil Nadu, WFM C. Lakshmi (6.5 points), fought gallantly, but faltered with her end game to go down to WGM Bhakti Kulkarni (7.5 points) in 91 moves.

Bhakti Kulkarni continued her fine form in the tournament after a first round loss to come back strongly to win five games in a row and drew one and again won two games in a row to emerge as the joint leader with Soumya.  Overnight joint-leader and top-seed WGM Soumya Swaminathan (7.5 points), playing with black pieces on the second board capitalised on the error made by Nandhidhaa (AAI) during the end game and registered a crucial win in 43 moves.