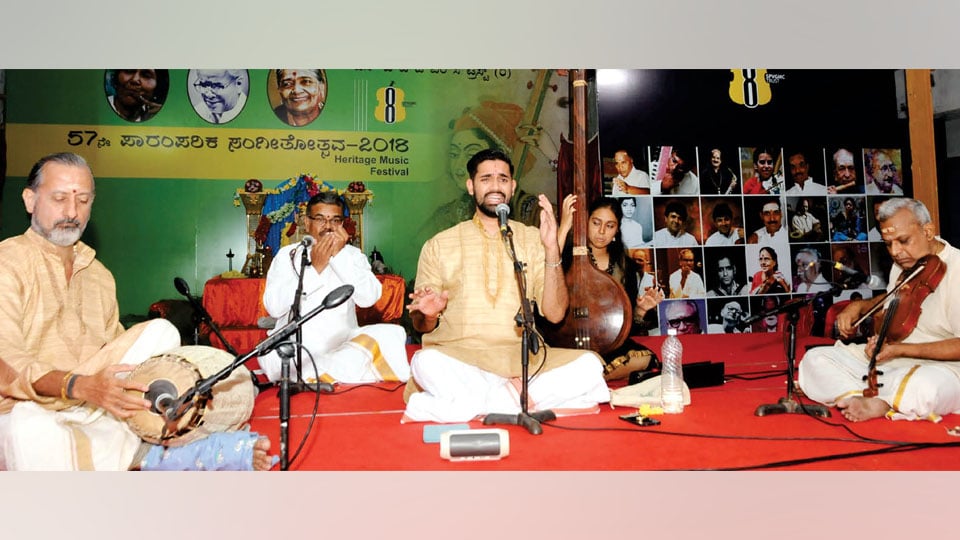 On the 21st September at 8th Cross, V.V. Mohalla Paramparika Sangeetotsava, Ashwath Narayan from Chennai presented a vocal concert with M.A. Sundareshwaran on violin, K.V. Prasad on mridanga and Gururaj on morching. The vocalist’s enchanting voice and cheerful presentation enlivened his concert.

There were many remarkable things in the concert. Ashwath had chosen rare compositions for the evening; A solid raga like Dhanyasi, hardly sung today, chosen for the main item; Total confidence with which the young vocalist presented the concert with his well-trained voice and rendition of compositions    of KVN fame.

Tyagaraja Pancharatna ‘Sadhinchane O Manasa’ was a good choice to start the concert with as it very much resembles a varna in structure and is therefore a good warm-up. ‘Gananayakam Bhaje’ by Deekshitar is interestingly listed both under Poorna Shadja and Rudrapriya.

A short but excellent Kamavardhini led to Tyagaraja’s ‘Shiva Shiva Shiva Enaraada,’ also adorned with neraval at ‘Bhagavatulato Poojinchi’ and kalpana swaras. ‘Pahi Maam Bruhannayike’ by Swati Tirunal (also said to have been composed by a Devadasi in Pudukkotai and not Swati Tirunal) is a charming composition with a chitteswara containing solkattu and sahitya and an interesting charana. The rapid delineation of Tyagaraja’s ‘Giriraja suta’ in Bangala before the main item was stimulating with commendable kalpana swaras. Dhanyasi received an expansive treatment. The ragalapana was exquisitely sung, Tyagaraja’s composition ‘Dhyaname Varamaina Ganga Snaname O Manasa’ neatly rendered and kalpana swaras at ‘Dharanu velayu Sri Ramuni’ developed with charm. The RTP in Shanmukhapriya was devoted to Lord Ganesha suiting the occasion. ’Ganapate mahamate namostute’ pallavi set to Adi (vilamba) talaa was marked with delightful sancharas in the Alapana and pallavi rendition and intellectual application of swaras.