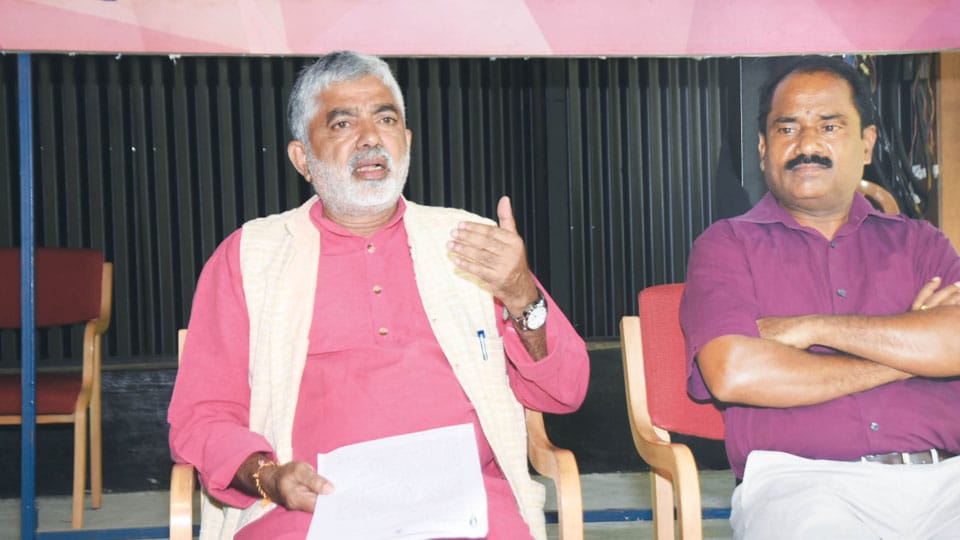 To feature interaction with artistes and staging of plays

Mysore/Mysuru: An 8-day ‘Greeshma Rangayanotsava’ will be held at Rangayana premises in city from tomorrow (June 12). While interaction with artistes will be held at B.V. Karanth Ranga Chavadi from 4 pm to 5 pm, plays will be staged at Bhoomigeeta auditorium at 6.30 pm everyday till June 19.

Announcing this at a press meet at Rangayana this morning, Rangayana Mysuru Director Addanda C. Cariappa said that Bharatiya Rangavidyalaya students of 2021-22 batch have finished their exams and one-year Diploma in theatre has been completed.

A total of eight plays, including four plays readied in two semesters (Prameelarjuniyam, Vaasaamsi Jeernani, Bekku Baavi and Vidisha Prahasana), two plays (Krishnegowdana Aane and Mookana Makkalu) by junior repertory, one play (Sutradhaara) by senior repertory and another play (Mr. Bogis), will be staged during the theatre festival. Tickets are priced at Rs. 30 per play.

Stating that a total of 15 members have completed one-year Diploma course from Bharatiya Rangavidyalaya in the academic year 2021-2022, Cariappa said that the Rangavidyalaya has invited applications from interested candidates for the next academic year (2022-2023). Last date to apply is June 25, interview will be held on July 11 and classes will start from July 18, he added.

Pointing out that a total of 38 shows of Dr. S.L. Bhyrappa’s mega play ‘Parva’ has been already organised at various States, Cariappa said that the next show is being organised at Mumbai on June 26 and Pune on July 3 and the team will leave Mysuru on June 23.

Stating that Rangayana Mysuru is organising Theatre Workshops in memory of theatre greats Subbaiah Naidu and Padma Shri Nagarathnamma annually and this year, a total of 35 amateur artistes have taken part in the workshops, Cariappa said that two plays will be readied from both workshops to be staged in the first week of July.

Apart from that, play ‘Sutradhaara’ has completed 40 shows and the team is on a tour to complete another 15 shows. Also, Bahuroopi-2022 will be organised in the month of December, Cariappa said.