Home » News » A combination of melody and bhava 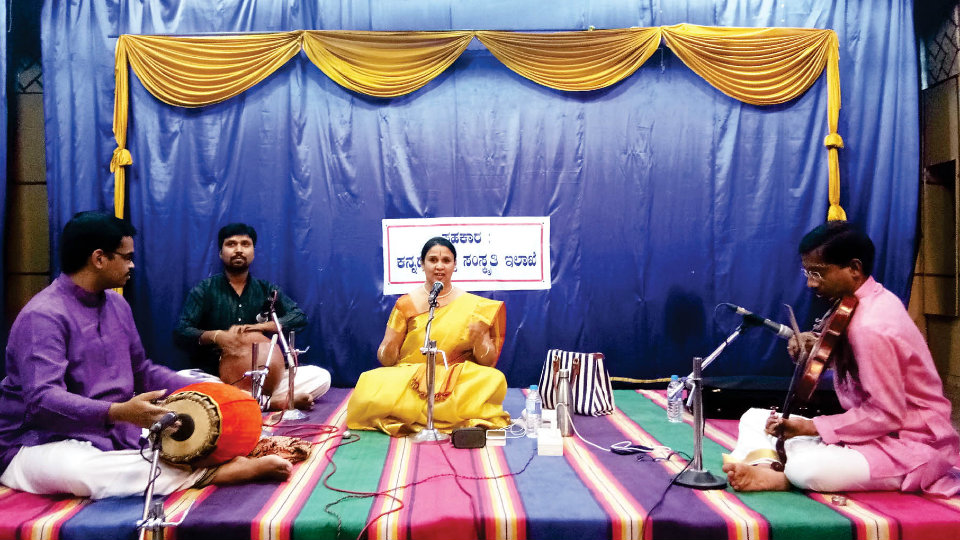 A combination of melody and bhava

The two music concerts held recently in Mysuru by two eminent women artistes proved their mettle time and again. One was a vocal concert at Veene Seshanna Bhavana under the aegis of Ganabharathi. The other one was an ensemble of percussion instruments with ‘ghata’ as the centre of attraction ! This was a part of ‘Moonlight Music’ at Suttur Mutt.

Vidushi Vani Satish gave a fine vocal concert on the 22nd of June along with Vidwans Achutha Rao on the violin, Trichi Aravind on the mridanga and Sharath Kaushik on the ghata respectively.

Vani hails from a musician’s family of Bellary Brothers fame. Honed by her uncle, father, brother and also Vidwan P.S. Narayanaswamy, she has developed a good style of her own that is dipped in pure classicism. Her sweet voice enables her to enhance the bhava. Good imagination and control on laya adds to it.

The concert began with a Varna in raga Abhogi in two speeds. The smooth alapana that blossomed in an ascending order of Mayamalavagowla led to a fine composition of Swathi Thirunal ‘Deva deva kalayamithe’. The neraval and a frill of kalpana swaras at ‘Janmaarjitha mama khila’ made it more interesting. A short and perfect prelude of Raga Anandabhairavi escorted Shyama Shastry’s ‘Marivere gathi evaramma’ in a leisurely pace. Her creativity came alive in sketching Khamach with many innovative phrases.

Tyagaraja’s ‘Seethapathi naa manasuna’ was rendered  perfectly with a neraval at ‘Premajuchi naapai pedda manasu chesi’. The krithi was adorned with swaras around Dhaivatha. The main raga of the day was shanmukhapriya. Both Vani and Achutha Rao did justice in delineating the raga. Bhava and melody reigned the manodharma part. Swathi Thirunal’s ‘Maamava karunaya’ was ornamented with brilliant kalpana swaras.

Vidushi Sukanya Ramgopal from Bengaluru is a well-known ghata artiste. She has created history by assembling only lady percussion instrumentalists to form a troupe called ‘Sthree Taala Tarang’. They have performed extensively in and out of the country. Many percussive instruments along with veena, violin with ghata as the main attraction sweeps the audience with ease. Sukanya’s hard work and imaginative skills has made this possible. She has even composed music exclusively for the instruments.

They performed on the 28th of June for a packed audience at the Suttur Mutt branch of Mysuru. Vidushis  Sukanya Ramgopal on the ghata, J.Yogavandana on the veena, Sowmya Ramachandran on the violin, Lakshmi Pillai on the mridanga and Bhagyalakshmi on the morching were the artistes. Needless to say, Sukanya was the driving force !

The programme took off with a Varna by Vidwan Lalgudi Jayaraman in the raga Valachi. Though veena and violin seemed to be leading, later on it was ghata all the way. However, the three percussion instruments gave good support one after the other for veena and violin in ‘Gajavadana Beduve’ (Hamsadhwani). It was only then the Ghata Tarang started. With six or seven ghatas around her, Sukanya led others with her own composition called ‘Ananda’ in raga Kunthalavarali.

Ghata ceased to be a ‘Tala vadya’. It was or they were producing the notes of that raga ! Ghatas with different shruthi or pitch to match the notes of that particular raga were arranged to produce ‘music’. With ghata in the centre, the mridanga and morching gave percussive support ! While veena and violin followed faithfully . That was the triumph of ghata, which usually does not enjoy an important place on the concert stage.

Here, one could enjoy both music and laya produced by ghatas with a rich variety of swara (jathis?) combinations she produced. She could easily play three or more notes simultaneously thus creating a blend of notes with lightning speed. Yet another composition ‘Waves’, penned by her, captured the audience with every artiste’s imaginative skills. Sukanya, apart from ghata, joined in ‘Konagolu’ thereby catering a variety of combination of both notes as well as lively jathis.

After a Krithi of Papanasanam Shivan ‘Parathpara Parameshwara’(Vachaspathi), they moved on to the main attraction of the day — a Raga-Tana-Pallavi in Shuddha saveri. After a brief alapana and taana on the veena and violin, Sukanya led the others for Pallavi. Her improvisations were enjoyable. The crescent in kalpana swaras had Tisra, Chatusra, Khanda, and groups of six and seven notes per beat. Kudos to Sthree Shakthi !