American writer Patrick Califa said: “If you don’t want to be a gawker, you’ve gotta join the circus.”  That finally made sense to me as I sat down with some popcorn to watch Jumbo Circus at Nazarbad.

For all I could do at this colourful show was gawk at the clowns, the trapeze artistes, the rope walkers, the ringmasters and the jugglers as they entertained the audience with their taxing, risky and yet brilliant acts. Overall, it was an end-to-end entertainment amidst cheer from the audience.

Artistes, with their flexible and spring-like bodies, had the audience spellbound as they danced, spun in the air, achieved stunts in a moving ring, balanced rings and balls on the tip of their noses and fingers, performed gravity-defying yogasanas, walked and danced on thin wires, sliced through objects with a whip, demonstrated their strengths by carrying heavy weights and rode on motorbikes in a confined enclosure.

It was worth every bit of the money I had spent on the entry ticket. Special lights, sound effects, foreign artistes and what not ! So enthralled was I that I yearned to find out more about the hustle and bustle of this ballyhoo. 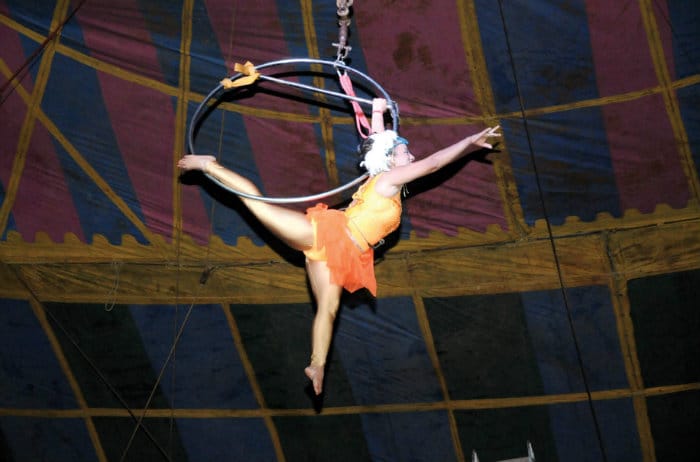 PRACTICE TO PERFECTION: Hours before the show, artistes need to practice to make it a perfect show. One small slip, the reputation goes kaput.

Backstage, he was busy fussing over the quality of tent material. “Ever since the Venus Circus Fire tragedy in Bangalore that killed over 90 people, one has to be extra careful, you know. We make sure the tent material is not cotton-based and instead is made of a fire-resistant material,” he says.

When I asked him what inspired him to take on the endeavour of organising circuses, he said, “My father was a respected circus artiste and in those days, people welcomed circus with love, warmth and anticipation. It was the love and warmth of the people that inspired me to organise circus events.” SHOW MUST GO ON – Premnath

I realised that he had spoken in the past tense and asked him if he has witnessed a change in the love and warmth of the people. Sighing wistfully, he said. “Things are different today, people’s definition of entertainment has changed, and it is all about cricket, TV and internet today. People have lost interest in circus. Even circus artistes have changed, earlier they showed no apprehension in taking 5 to 6 years to master a single act, like the ‘Flying Trapeze’ (the most risky stunt) and ‘Parallel Bar.’ The scene is different today.” His voice trails off. But the waning interest of people in the circus is not the only furrowing brow in Premnath’s face.  He talks to me about the other administrative challenges that circus organisers face in the country today — be it getting permission for a centrally located venue, escalating expenses and lack of sponsorships.

But the bigger headache according to Premnath is the ban on displaying wild animals as part of the show, which has bled the interest of this age-old recreational activity out of people, especially children. “Banning lions and tigers from circus is a huge blow that the circus industry is dealing with,” he says. Without animals, circus has now been reduced to acrobat acts, he adds.

Interestingly enough, when I spoke to audience Rini and Shefali, a small-scale industry owner and homemaker, they gave me to understand that they were thrilled to be a part of the show that used no animals. “It’s nice to be a part of the circus where there is no chance of witnessing animal cruelty,” they said. If there was anyone who would want to disagree with them, I am sure it would have to be Premnath. 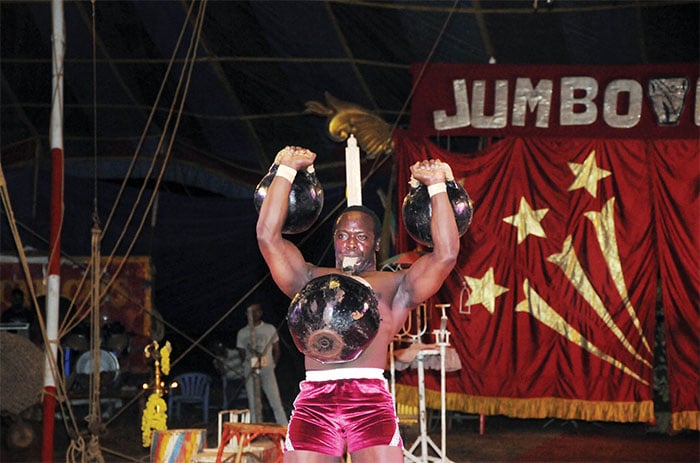 Coming to the training part and practice sessions, each artiste has to practice at least four hours before the show and the circus managers have to take precautions so that nothing goes wrong while stunning acrobatics are performed. The risk that the stunt artiste faces here is immense and all this is for one cause — audience entertainment.

And for the artistes, their lives revolve around the circus. Rain or shine, they have to perform and be the best. These performers’ tricks, twists and turns need constant practice till they achieve perfection. And once perfection is achieved, new tricks have to be learnt — constant innovation, constant performance and constant perfection. From Russia to Mysuru – Sherzad and Anaya

When it was time to leave, I felt like a gloomy little child. Partly sad that the colourful, scintillating Jumbo Circus was over and mostly sad wondering, “Is the circus scene in our country getting over?” “What happened to this age-old entertainment ritual, we call circus?”

As a child, a circus to me meant packed shows, endless laughter, delightful madness and mirth, sheer excitement and in the end the gloominess and sadness when it got over. At the circus yesterday, I wasn’t sure if it was the same anymore. As I left, I wondered when was it that it had all changed. When was it that people lost interest in circus, and why? Is it really because people’s tastes in entertainment have changed or is it because the quality of circus entertainment has changed over the years? Well, from what I saw and from what I have seen during my childhood days, I would say a little bit of this and a little bit of that.