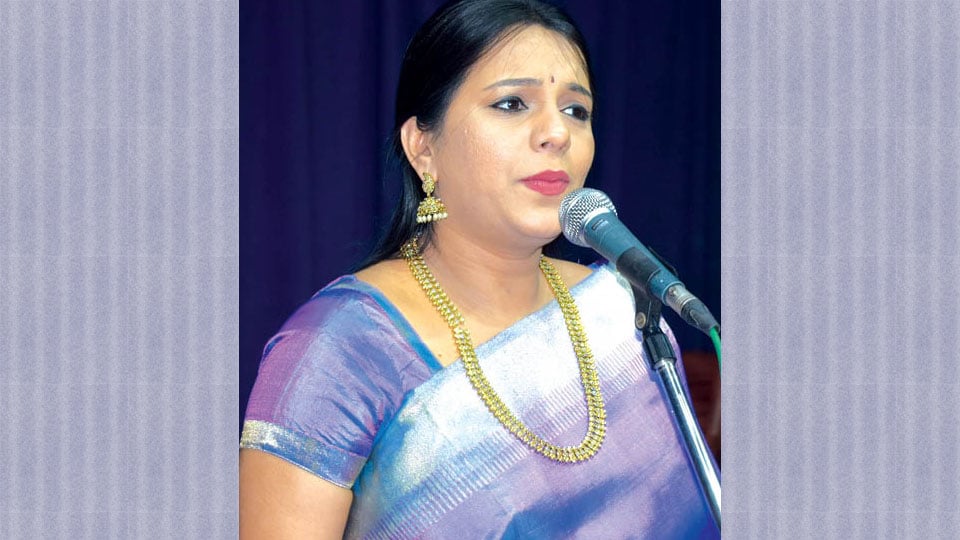 Saketaraman from Chennai had to perform for Sri Nadabrahma Sangeetha Sabha on the 15th of February. But as he had an indisposition of health, Sriranjani Santhanagopalan gave a vocal recital with Trivandrum Sampath on violin and K.U. Jayachandra Rao on mridanga.

Sriranjani has a blessed voice which has both volume and melody. Her training under her father and Guru Neyveli Santhanagopalan has groomed her into a top musician today.

She has all the qualities of a good vocalist — a splendid manodharma, a very melodious voice which doesn’t sound harsh even in the tarasthayi, Kriti rendition with clear diction and bhava, wide imagination, proficiency in ragalapana and neraval rendering, fluency in kalpana swaras, an understanding of aesthetics and a good stage experience. While she has absorbed her father’s style and oeuvre, she also shows her individuality in her singing.

Her selections for the evening — be it ‘ Nannu Brovu Lalita’ in Lalita by Muthuswami Dikshitar, ‘Sharavana Bhava’ by Muthiah Bhagavatar in a rare raga Pashupatipriya, which surprisingly also had ragamudra and a beautiful chitteswara, Yadukula Kambhoji (hardly taken up in today’s concerts for detailed rendering) in which a Dikshitar’s  navagraha kriti ‘Diwakara Tanujam’ was rendered with majesty.

One of the main items of the evening was Maharaja Kumara Yateendra’s ‘Gajavadana sammodita veera,’ which was sung following a very aesthetic expansion of the raga. The chitteswara called for attention and was rendered slowly allowing the beauty to sink in.

K.U. Jayachandra Rao was understandingly quiet during the first presentation of the chitteswara and followed it the second time with soft strokes. The neraval ‘Vasudata pura surakshana deva’ was expanded and bhava-laden swaras knitted. After a short but striking.

Owing to shortage of time, Sriranjani chose to sing tana directly in the RTP in Hamsanandi. The tanam was well-rendered proving the vocalist’s hold over breath and the pallavi was set to deshadi tala.  Sriranjani explained how the tala is wrongly followed and demonstrated the right way of following the tala before singing the pallavi.

The sahitya of the pallavi was ‘Karuninchara lokadhara,’ which was decorated with a series of ragamalika swaras in Bahudari, Jayantasri, Nalinakanti, Hamsanada, Kadanakutoohala, Kapinarayani, Bilahari, Chandrajyoti, Brindavani, in all of which the first line of a tyagaraja composition in the particular raga was sung for a single avarta. This was a novel idea of presenting ragamalika swaras and also very impressive. The experiment was very well-received. The post-tani part included the popular devaranama of the Bombay Sisters’ fame in jonpuri — ‘Harichitta Satya,’  a shloka on Krishna — ‘Kasturi tilakam’ followed by ‘Muralidhara Gopala’ in mand and the dhanasri tillana by Swati Tirunal.