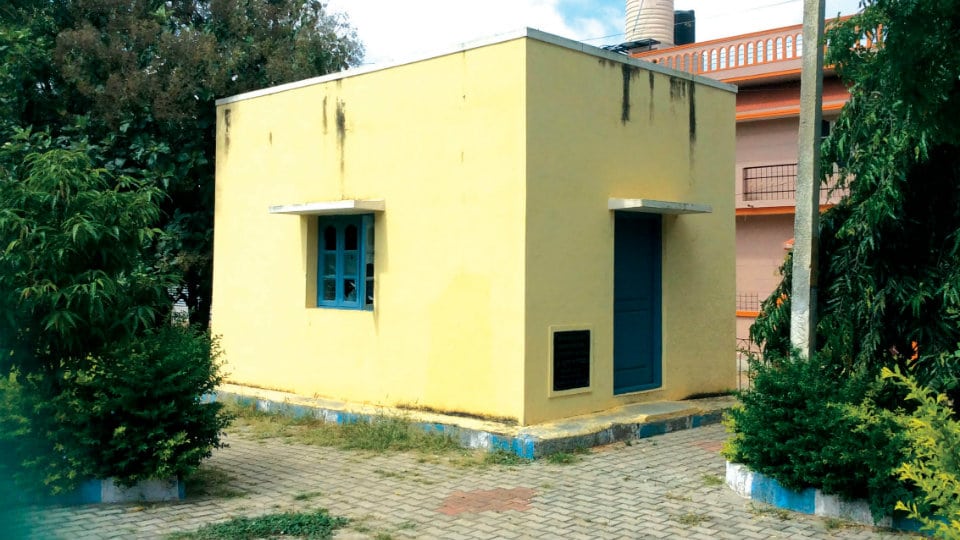 An apology of a Mini Library inside Siddiqui Nagar Park

How many more such violations in our city?

Mysuru Grahakara Parishat (MGP) has been fighting against violation of Karnataka Parks Act, 1985 ever since its inception. Most visible protests have involved Cheluvamba Park (where it succeeded in demolishing 50 percent of the building to comply with the law), People’s Park (where it did not succeed to prevent the construction of the library), Gururaja Layout (where it succeeded in preventing the construction of water tanks, thanks to the timely and prompt intervention of the then Minister Tanveer Sait).

Recently, one of the residents of Siddiqui Nagar complained about a library constructed in 2015-16 through the grant of MLA’s funds. As one can see from the photo, the mini building though called a library has never functioned as such.

Today, it is in poor shape with some junk material stored. To our surprise, we learnt that it was built from the funds from Tanveer Sait’s MLA funds. More than likely he might not have been informed properly about it.

We were told that officials justified the construction by stating that Parks Act allows 5 percent of areas to be used for construction. However, it is the misreading of the Act. Only when a park area is more than 2 hectares — it is not the case here — construction is allowed and that too for storing park implements or for quarters for security guard and not for any other purpose.

Another argument to support such violations is to quote the clause from Master Plan which does allow 5% of the park for open air theatre, dwelling for watch and ward, sports clubs, libraries, milk booths and HOPCOMs only.

Since it is the Parks Act which is overriding Act to preserve the lung space in the cities, Courts have overruled in favour of the Parks Act.

READ ALSO  Save one hour exclusively for your own health, says Yoga expert Dr. Manjunath

Though the Siddiqui Nagar Park is poorly maintained, it still looks reasonably attractive. In some places boundary wall has collapsed and cows are entering freely inside the park. There are two non-functioning fountains. Money wasted for the building could have been utilised to maintain these fountains.

We wonder how many such violations may be taking place in over 400 parks in Mysuru. Often it is the Government authorities themselves who are violating the laws. Only when the concerned residents of the area come forward, these parks can be saved. No NGO, however involved it is, can monitor all the parks of the city.

If we take the attitude that it is “none of our business” then we will lose precious lung space of the city as happened with People’s Park.

We urge residents to get involved and to bring to the attention of the authority or local Corporators (if they are not involved) or MLAs to prevent such violations.