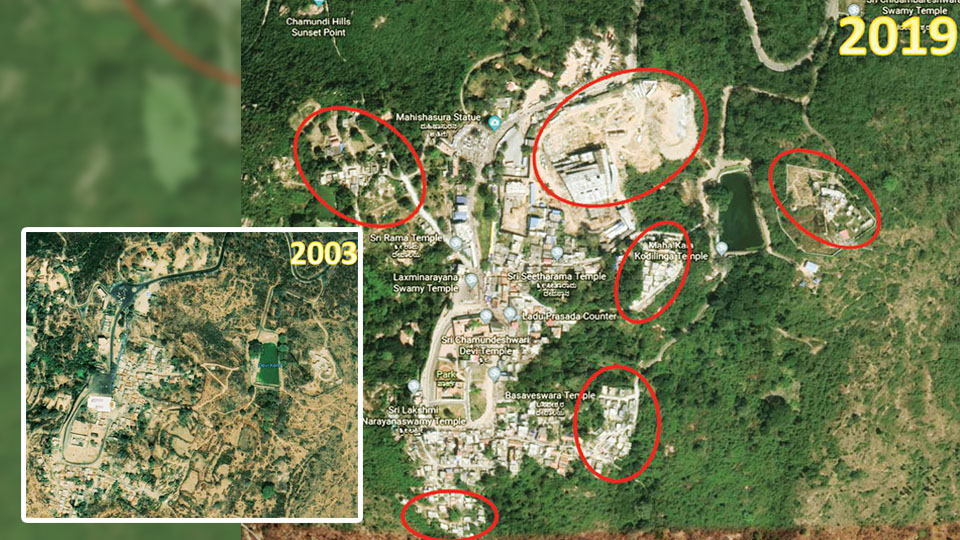 The news in last week’s Star of Mysore on what might happen on Chamundi Hill’s future made a sad reading. Having had a close affinity with this iconic Hill from childhood, we Mysureans should not be mute spectators while plans of four-lane motorways, shopping malls, housing colonies, modernising the rocky steps and putting up ropeways are being proposed with little regard to environment and heritage value of the Hill.

The Google Earth pictures here show a shocking comparison of the Hill top in 2003 and 2019. Though it is pleasing to see green cover, construction activity is alarming.

Authorities have to quickly stop this uncontrolled explosion of real estate on top of the Hill with firm laws and clear demarcation of boundaries of village limits. A sturdy stone wall with barbed wire on top and all around the Hill might save the forest areas around it.

The Forest Department should setup watch posts and strictly guard the Hill’s green area from further damage or exploitation. Else, in the next 20 years we will be cursing ourselves for allowing the beautiful Hill to become a competitor to the infamous Favela slums of Rio de Janerio. Our city planners must read how Brazilians are trying to cope with this mess they allowed on themselves.

Since the ropeway idea keeps popping up every couple of years in spite of environmentalists opposing it, I feel that the political leadership should drop the idea in the interest of ecology. Some stakeholders are quietly lobbying for it with the sole aim of commercial gains.

Alternative plan with no damage to flora and fauna

Assuming that the ropeway project may get pushed through in spite of all opposition, I would like to suggest an alternative which would impact the flora and fauna the least.

The ropeway can be a single hanging stretch from a small landing pad near Sri Lakshmi Narayanaswamy Temple on the South edge of the Hill top to a single pylon on the ground just across the NH-766 bringing it to the starting point on the 3-4 acre vacant land next to Dalvoy Lake. This land next to the Lake which adjoins the Ring Road can be developed into an amusement park with the Dalvoy Lake cleaned up and boating introduced.

The cable car pylon at the Eastern corner of this ground could be around 30 meters high so that the cable cars pass high above the NH-766 safely. The land surrounding the Truck Terminal on the other side of the Ring Road can be used as parking space with a capacity of around 100-150 buses and 200-300 cars.

The cable cars should have a capacity of 15-20 persons per car and capable of running 10-12 hours per day. The landing plaza on the Hill top should be minimal with a small (100x100ft) structure enclosing the ropeway’s bull wheel for the cable cars to unload, take a U-turn and reload passengers. All the heavy drive mechanisms and electrical installations should be at the ground station starting point, to keep the structure on the Hill-top as small as possible.

A win-win for stakeholders

The long-term plan should be to increase the usage of this ropeway and reduce road traffic to the Hill. This will bring down smoke pollution, avoids construction of a 4-lane road and also parking space expansion on top.

The entrance to the existing Hill roads should have Toll Plazas and using the Hill road should be priced slightly more than the cost of using the ropeway. People should understand that this is a kind of environment tax which we have to bear if we want to use the road to reach the Hill. Thus the controversial ropeway can be converted into an environment-friendly proposition with a win-win for all stakeholders.

J.A. Balraj is a resident of Dattagalli, and works as a General Manager, IT at AT&S India Pvt Ltd. in Nanjangud. Born in Mysuru, he is an alumni of Good Shepherd’s and St. Philomena’s College.

Being passionate about Mysuru and its welfare, as also a daily traveller between Mysuru and Nanjangud, he was the one who realised that an underpass could be constructed across the runway extension being planned for the Mysore Airport and suggested it through an article in Star of Mysore in July 2013.