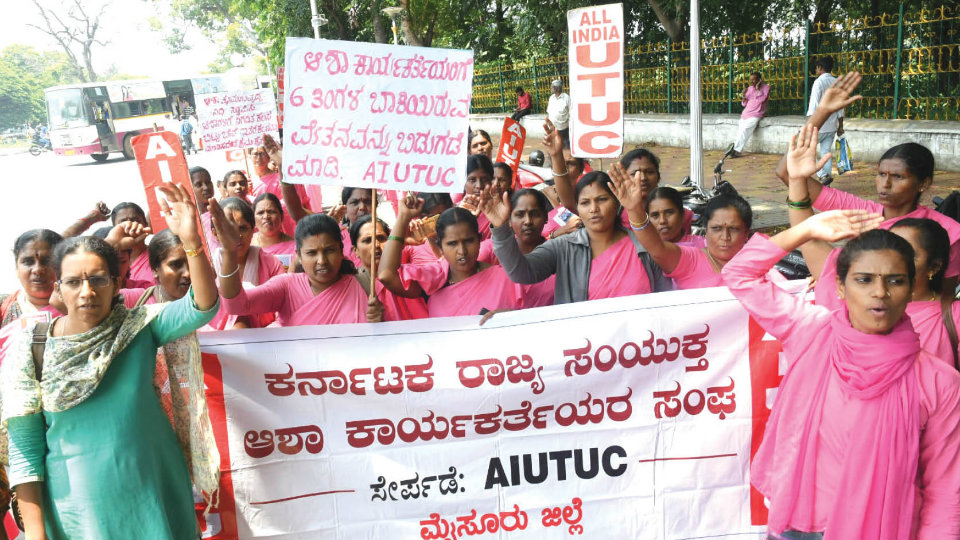 Holding placards in their hands, they passed along the Circle near Office of Superintendent of Police (SP) shouting slogans against the Governments and Health Department for turning  a blind eye to their demands.

Later, the Accredited Social Health Activists (ASHAs) also staged a protest outside the Office of DHO urging to increase their wages, to release past five months pending wages, to implement fixed working hours and  holidays along with retirement benefits. They appealed to cancel the orders of releasing their salary after uploading such details to ASHA portal.

Demanding the Government to regularise the services of ASHA workers, the protestors alleged that the Union Government has not taken steps to fulfil their demands even after submitting several memoranda.

C.S. Seema, who led the protest, said that nearly one crore women were employed as ASHA workers under various programmes across the country. Of them, 27 lakh workers were engaged in Integrated Child Development Scheme while around 10 lakh workers in National Rural Health Mission programme, and 28 lakh workers in Midday Meal Scheme. Most of the workers are from weaker sections of society and they are living in pitiable conditions in rural areas without job security, she said.

Later, they submitted a memorandum to the Government through officials of DHO Office.