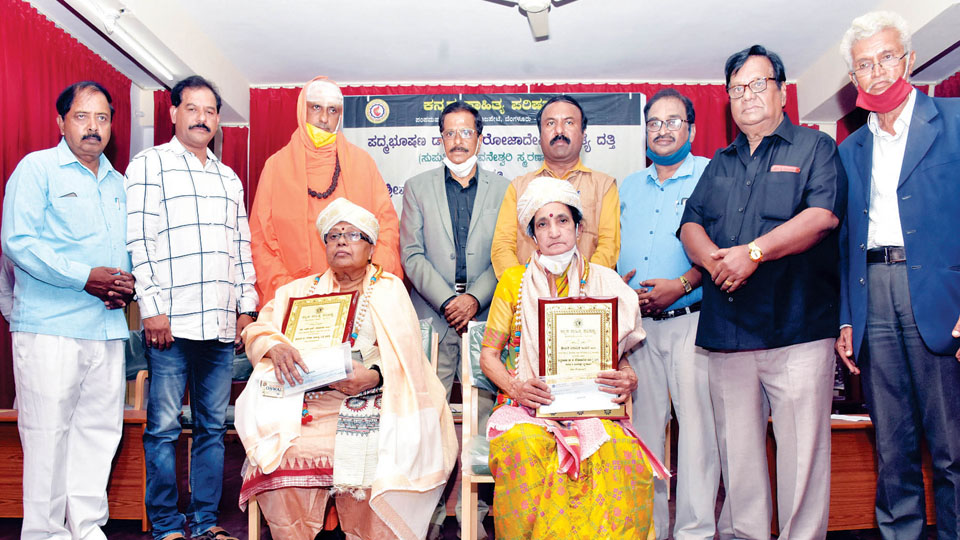 Pointing out that many women have succeeded in literature despite all odds, the Swamiji said that women writers can achieve much more if their works are analysed factually and encouraged.

Noting that both have been engaged in writing for years, he said that they are honoured for their contributions to the literary field, despite their limitations.

Observing that the media should recognise and honour such women writers who are shy of publicity, he opined that the Sahitya Parishat should come forward for recognising the talent of women writers.

Writer Vasumathi Udupa, who spoke after receiving the award, said that she made her debut in the literary world by writing poems. Later she developed an interest in writing stories, when she realised that prose is a better medium for expressing the inner self and mind, she said.

Pointing out that her first story was published in a Kannada weekly when she was just 19 years, Vasumathi Udupa said that later on, all articles of her were published in newspapers.

Veteran writer Sujatha said that she has written in about 12 forms of literature and the readers must get a clear understanding of her works after going through them thoroughly.

Asserting that she developed more interest in literature by  relentless reading, she regretted that Sanskrit literature is on the brink of extinction.

Kannada Sahitya Parishat President Dr. Manu Baligar said that Vasumathi  Udupa  and H.S. Sujatha have been selected for the two awards in recognition of their contributions to the literary field.

Pointing out that it is perhaps for the first time that there is no objection to the selection of the awardees, he said that the two women writers are a great inspiration to the younger generation of writers.