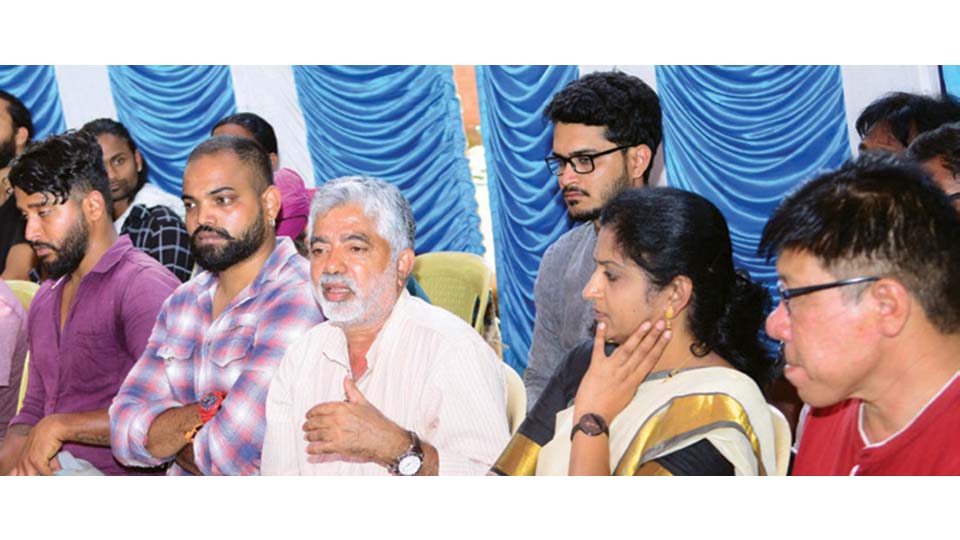 Mysuru: With the ten-day Bahuroopi Raashtriya Rangotsava (National Theatre Festival) successfully concluding on Sunday, Rangayana Director Addanda C. Cariappa on Monday said that the event has been considered as ‘The best’ by the people when compared to previous editions of Bahuroopi.

Addressing a press meet at Rangayana premises here yesterday, Cariappa said that with the astounding success of Bahuroopi with the theme ‘Mother’, the responsibility of Rangayana has increased.

Noting that giving importance even for minute activities has been the main reason for the success of the event, Cariappa said that artistes and staff of Rangayana played a crucial role in the success, for which they should be thanked.

Pointing out that the Theatre Festival with the theme ‘Mother’ was unique in nature this time, the Rangayana Director opined that Bahuroopi is beyond all ideologies. Stating that the entire team of Rangayana worked with a sportsmanlike spirit for the success of the event, he said that more than 65,000 people from across the State and the country attended the 10-day event.

The Rangayana Director further said that Bahuroopi Rangotsava will be made into a documentary by using the videographs and photographs that were captured during the 10-day event.

Pointing out that the just concluded  Bahuroopi Raashtriya Rangotsava was  Bahuroopi-2021 Festival as the event which was earlier scheduled to take place in 2021 had to be postponed due to COVID pandemic,  Cariappa said that Bahuroopi-2022 will be organised at the end of the year, adding that the theme for the 2022 Festival has not yet been decided.

Cariappa said that the Rangayana earned a total revenue of about Rs. 9 lakh, with gate collection from plays alone accounting for Rs. 5 lakh. Pointing out that the ticket for plays was priced at Rs. 100 per head, he said that the event also featured many stalls selling books, handicrafts, food items and other articles, which augmented the income other than that from plays.

He pointed out that plays such as ‘Matte Mukhyamantri’,  ‘Kamaroopigal’, ‘The Square Root of Sonnet’, ‘Mr. Bogis’ etc., ran to full houses. The Government had sanctioned Rs. 50 lakh for the theatre festival and all the theatre troupes which took part in the event were paid Rs. 50,000 each, he added.

Staging of Parva from Apr. 9

Cariappa said that Rangayana will resume performance of acclaimed  writer Dr. S.L. Bhyrappa’s ‘Parva’ popular play by staging the play at Davanagere on Apr. 9 and 10. Announcing that ‘Parva’ Rangapravasa will feature enactment of the play in about 12 places across the State, starting from Davanagere, he said that the play will be staged nationally after May with performances in cities such as Mumbai, Nagpur, Bhopal, Chandigarh and Delhi.

The Rangayana is preparing to conduct a ‘Girijanotsava’ before Apr. 9,  ahead of the resumption of Parva play, he added.

Bahuroopi Rangotsava
Intl. Symposium on Applications and Innovations with Intelligent Systems held
NEP to be a prominent debate topic at the meet