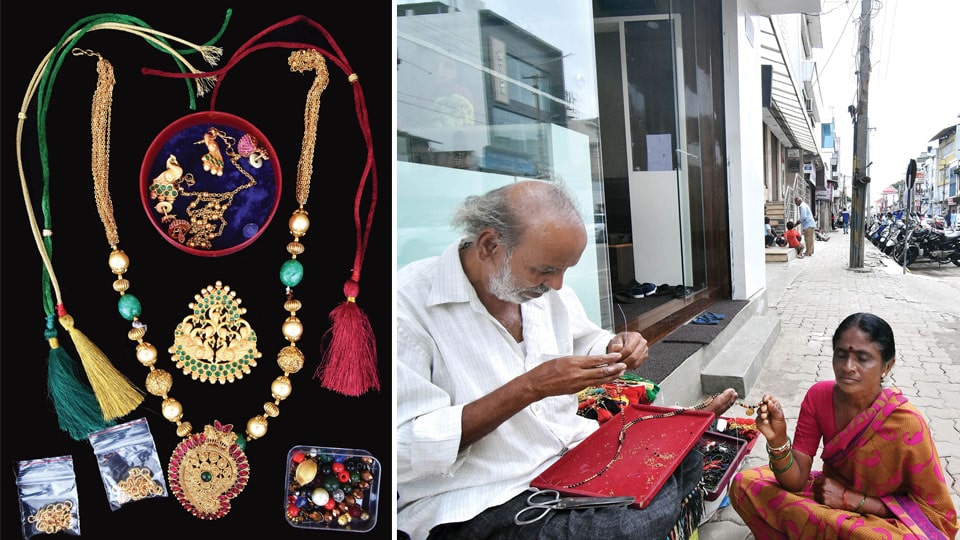 Beadwork is the use of beads in fabric decoration and ornamental design. Beads were used decoratively in ancient Egypt, Greece and Rome and during the Indus Valley civilisation. However, today, the art that is handmade is becoming increasingly hard to find, which is reflected in its price point in the marketplace. Beadwork, with its symmetric or asymmetric patterning, stands out for its intricate and innovative designs. The practice of beading transmutes a jumble of beads into a meaningful whole. This Weekend Star Supplement introduces some of the unsung traditional bead artists on Ashoka Road pavement who have mastered the delicate art and made it their own.

These  threads full of enchantment have entangled in your caress…

No clue or hint I can fathom, how this knot could be unravelled…

Each shred hums in my body, like a stream from the heaven…

A melange of colours, a dash of design — Craftsmen engrossed with threads and shimmering beads artistically woven around their deft fingers, their tools stacked on the roadside, usually flocked by women, intrigued by their skills on display. One would be forgiven for thinking that these are scenes from a bygone era but this is a common sight on Ashoka Road, if you have the eyes to spot it.

Bead art in India dates back to Indus Valley Civilisation and is said to be 5,000 years old. People during that age made beads out of silver, gold, clay, ivory and even wood. Indian jewellery, made out of various stones, pearls and metals stands out for its uniqueness of design and craftsmanship. As much as we praise the magnificence of jewellery, the toil and talent of the master craftsmen usually escapes into obscurity and these unsung craftsmen are a classic example of hardly being recognised for their talent or effort.

Speak to them and each craftsman educates us through the vocabulary of beads. Individual beads act like words, strung together in sentences. Each craftsman on the sidewalk tells the story of beads and what inspiration triggered the design. These beaded objects are deeply personal and the men share bits about themselves, how the art was transferred from their forefathers and how they attentively followed the instructions — though they were tough to follow initially.

Nimble hands to the needle

One can actually see how the beads are dexterously moved from their nimble hands to the needle and string to create that exquisite design. These designs become a prized possession of a woman who proudly shares them with the world.

Many cultures have rich beadwork traditions and aesthetics and motifs can vary. Like other traditional craft forms, such as embroidery or weaving, beadwork symbolises visual language and messages that are passed down within a community or family. Their works simultaneously keep their culture’s traditions alive apart from providing them livelihood.

Embroidery has been the art form that adds beauty to clothing to express individual creativity.  Beadwork is respected as a traditional craft and there are amazing bead artists who are blurring the boundaries of art and craft, creating works of art that reflect rich traditions. The craftsmen on Ashoka Road, undeterred by the chaotic traffic and surging pedestrians, are busy threading, stringing and modifying a variety of ornaments as per the demands of their customers. Star of Mysore caught up with these beadwork artisans who are seen with their small silver boxes comprising velvet trays, colourful threads, strings, needles and scissors.

These artisans have been into this profession from generations and have been eking out their living on Ashoka Road, which was known as Jewellery Bazar during the time of erstwhile Maharajas.

Various branded jewellery stores across the city also avail their services for stringing beads of precious stones such as emeralds, rubies and also semi-precious stones. Their service charges depend on the pattern, starting from mere Rs.30 and could go up to Rs.800 for real gem stones.

Passed on from forefathers

My forefathers have been into this profession from the past 60 years. I too picked up my beading needle and thread watching them do it since childhood. Our work is related to jewels so we sit near jewellery stores,” quips Syed Rafiq, one of the beadwork artisans with more than 30 years of experience.

He also adds that his father Nisar Ahmed is one of the oldest beadwork artisans and informs that his father had worked as a jewellery artisan even for the royals during those good old days.

From Royalty to Commoners

Mubarak Pasha, another bead maker who is into stringing from the past 20 years and also hails from a family of artisans told SOM: “My grandfather and my father got me into this line. I usually get customers who want me to string ‘kasina sara’ and ‘taali sara’. I charge between Rs. 30 and Rs.100.”

He also mentions that his father too had worked on the ornaments like the braid jewellery belonging to the royal family. When asked if he would pass on the craft to his children, he opines: “It is left to them to decide what they want to do”.

Little further away was a father-son duo busy stringing pearls on the same street. Abdul Wajid, who has 56 years of experience in this art says: “This is my livelihood and passion. The variety of beads that I work on not only suffices the aesthetic sense but has also religious angle to it. Genuine pearls were believed to bring in good fortune and were popular with the royals in olden days. Gradually common man took a passion towards them. Black beads are also known to fight negative energy.”

Abdul Wajid also adds that the most special work till date he has worked on is the jewellery belonging to the Palace.  Zabiullah, who was seen sitting opposite to the Arali Mara on Ashoka Road, has an experience of over two decades.

“This is a delicate art and we have to carefully string it, the love for jewellery in Mysuru can be judged from the presence of many jewellery shops. Customers keep me busy all day,” he says as he replaces a string of an antique pearl set.

As we converse with these talented artisans, we noticed that many customers visit these craftsmen to avail their services. “I have come here to attach a coin pendant to the black beads for the ‘mangalsutra’ for my daughter who is getting married next month. Availing services here saves a lot of time and it is also low on cost,” says Gowramma, a locality resident.

Rehana Afroz reveals her reason for the visit. “The pearl necklace that I had once brought from Hyderabad was broken by my child and I am here to get it stringed again and also to change the back rope ‘Dori’ of my multi-layered beaded necklace.”

“I have purchased the beads and I want to get a ‘jaumala’ done here with knots and I also have to replace a stone in my ring,” says Kavitha, a housewife.

These beadstringers are available from 11 in the morning to 8 in the night at their respective spots. We salute these skilled craftsmen who eke out their living by sitting on the pavements beating all odds and help womenfolk enhance their beauty through their delicate and dedicated work.