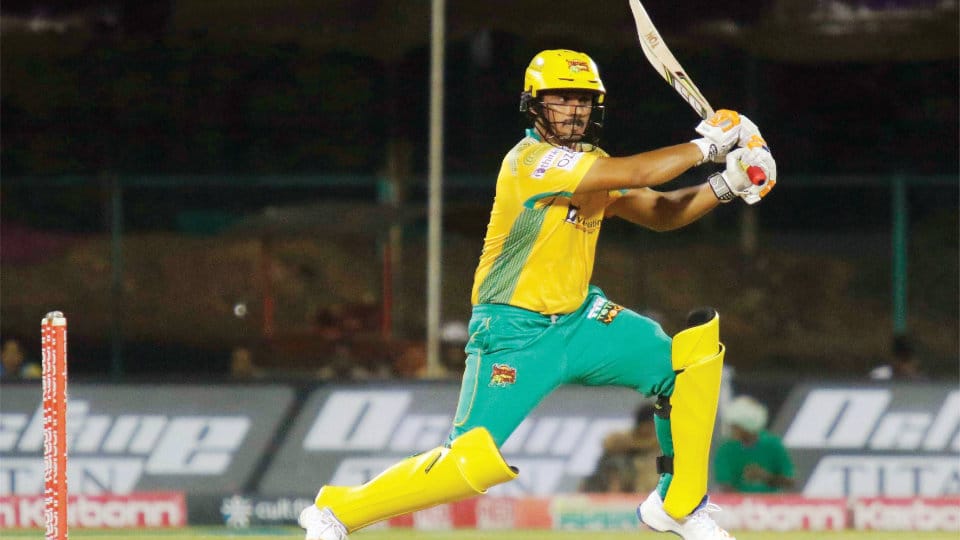 Hubbali: Bijapur Bulls became the first side to seal a semi-final berth in the Karbonn Smartphones Karnataka Premier League 2017, powered by Cycle Pure Agarbathies with a thrilling one-run victory over Belagavi Panthers at the KSCA Rajnagar Stadium in Hubballi, yesterday.

Having set Belagavi a 155-run target, thanks to captain Bharath Chipli’s 52-ball 68, a combined bowling performance ensured Bijapur crept through, despite Stuart Binny’s unbeaten 40-ball 55. The win lifted Bijapur to the top spot in the table with eight points. Belagavi, currently on seven points, have to wait till the end of the two matches on Tuesday to know their fate.

Stalin Hoover got Belagavi’s chase off to a quick start, scoring a 14-ball 23 to take the total past 50-mark early in the fifth over. At that point, it seemed Belagavi would ace the chase, but when Hoover was run out, the tide changed. Prithvi Shekawat had K.N. Bharath (6) and Sunil Raju (1) dismissed in quick succession and Belagavi’s early momentum was completely drained, reduced to 57 for 4.

In Binny, Belagavi had someone who could single-handedly win them the match though. He guided the chase, ensuring the scorecard never stayed stagnant, finding the fence whenever he could. At the other end, S Rakshith was an ideal foil, even scooping K.C. Cariappa over the keeper’s head at one point. Their 42-run stand revived the innings, M.G. Naveen crucially broke through in the 14th over though, with Rakshith (17) miscuing a slog.

Bijapur had the momentum again. But D. Avinash lifted a couple of massive sixes to keep Belagavi in the game. It helped that the dew made fielding difficult, with both players dropped as the nerves reached fever pitch. Avinash was then dismissed off a no-ball in the penultimate over off More, and Binny dispatched free-hit into the stands.

Earlier, Shubang Hegde, the young left-arm spinner, surprisingly opened the bowling for Belagavi, with Mohammed Taha (11) and Chipli finding the fence a few times early on for Bijapur. However, it wasn’t all plain sailing. Taha (11) wasted his good start, holing out to Avinash in the fourth over, and the new man, A.M. Kiran, was having trouble picking Hegde, the batsman beaten a couple of times with turn. Belagavi were stringent in the field as well, and despite the odd boundary, Bijapur’s scoring-rate wasn’t as much as they would have hoped it would be. After 10 overs, they were just 56 for 1.

At the end Bulls managed  to put up a fighting score of  154 in 20 overs which just proved enough for them to defend the target.