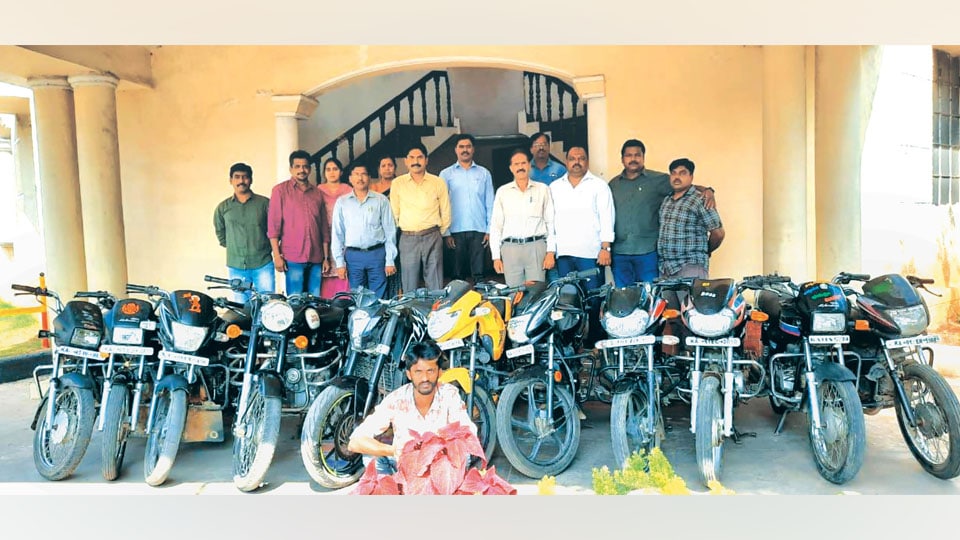 Mysuru:  In a major catch, the CCB Police, who arrested a bike-lifter, have recovered 11 two-wheelers allegedly stolen by him. Mahadeva, 22, of Lakshmipura village in K.R. Nagar taluk, is the one who is arrested.

Acting on a tip-off, the CCB Police picked up Mahadeva from near CESC office at SRS Colony in Hootagalli on Hunsur Road on Jan.16. During interrogation, he confessed of lifting two-wheelers from many areas, following which eleven two-wheelers, totally worth about Rs.6 lakh, were recovered from him.

With his arrest, the Police have cracked four cases of vehicle thefts — one each registered in city’s Jayalakshmipuram, the district’s K.R. Nagar and Periyapatna and Bengaluru’s Vijayanagar Police Stations — while the owners of seven other two-wheelers are yet to be traced.

The nabbing and seizure operation was carried out by CCB Police Inspector Kiran Kumar, ASI Chandregowda and staff under the guidance of DCPs M. Muthuraj and B.T. Kavitha and ACP Mariyappa.