Home » News » Chakri Jhul from Chhattisgarh on display at IGRMS 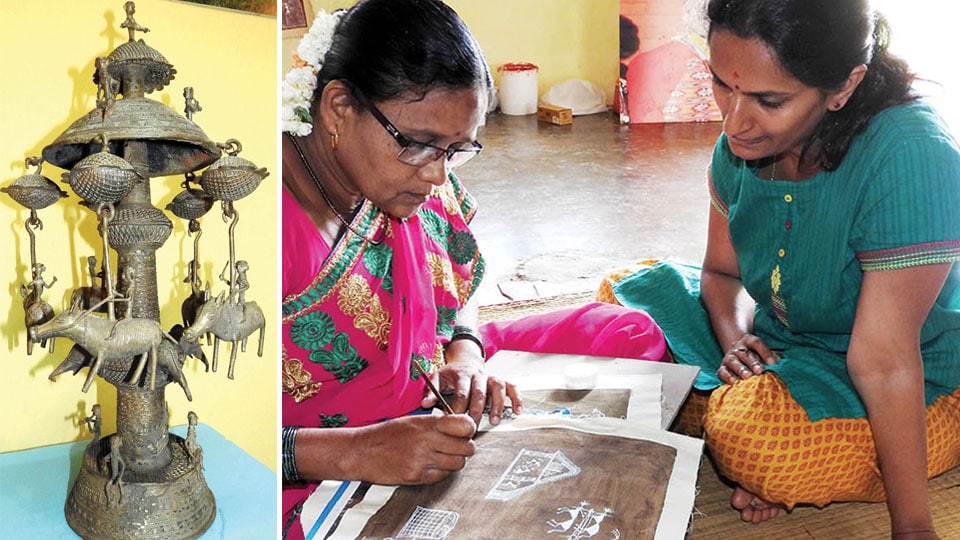 The Dhokra craft exhibit was inaugurated by renowned tribal artist Meenakshi Wayde. The object will be displayed till August end.

Chakri Jhul, a brass object was collected from Ektal village, Raigarh district of Chhattisgarh. The object is symbolically made as seen often in village fairs. The Chakri Jhul is installed in playgrounds with child-powered rotating platforms, with bars or handles to which children can cling on while riding, and chairs or bench for sitting. They are also commonly populated with horses, pigs, zebras, tigers or mythological creatures.

Dhokra Art: Dhokra Damar tribes are the traditional metal-smiths of West Bengal. Their technique of lost wax casting is named after their tribe, hence Dhokra metal casting. The tribe extends from Jharkhand to West Bengal and Orissa; they are the distant cousins of the Chhattisgarh Dhokras. A few hundred years ago, the Dhokras of Central and Eastern India travelled South as far as Kerala and North as far as Rajasthan and hence are now found all over India.

Dhokra is non-ferrous metal casting using the lost-wax casting technique. This sort of metal casting has been used in India for over 4,000 years and is still used. One of the earliest known lost wax artefacts is the dancing girl of Mohenjo-Daro. Dhokra horses, elephants, peacocks, owls, religious images, measuring bowls, and lamp caskets etc., are highly appreciated. The lost wax technique for casting of copper based alloys has also been found in China, Egypt, Malaysia, Nigeria, Central America, and other places.

There are two main processes of lost wax casting: Solid casting and hollow casting. While the former is predominant in the South of India, the latter is more common in Central and Eastern India. Solid casting does not use a clay core but instead a solid piece of wax to create the mould; hollow casting is the more traditional method and uses the clay core.

Process of Dhokra craft: The first stage of the lost wax hollow casting process consists of developing a clay core which is roughly the shape of the final cast image. Next, the clay core is covered by a layer of wax composed of pure bee-wax, resin from the tree Damara orientalis, and nut oil. The wax is then shaped and carved in all its finer details of design and decorations. It is then covered with layers of clay, which takes the negative form of the wax on the inside part.

In the second stage, hot metal is poured on clay mould. Drain ducts are left for the wax which melts away when the clay is cooked. The wax is then replaced by the molten metal, often using brass scrap as basic raw material.

The liquid metal hardens between the core and the inner surface of the mould. The metal fills the mould and takes the same shape as the wax. The outer layer of clay is then chipped off and the metal icon is polished and finished  as desired.

WORKSHOP ON WARLI PAINTING: Under ‘Do & Learn series,’ IGRMS is imparting training on Warli Tribal Painting of Maharashtra. The training will conclude on Aug. 9. Noted tribal artist Meenakshi Wayde and her assistant Vikas are imparting training since Aug.3.

READ ALSO  Abharana Petti from Kerala on display at IGRMS

The Warlis or Varlis are an indigenous tribe or Adivasis, living in mountainous as well as coastal areas of Maharashtra-Gujarat border and surrounding areas. Everything about Warli is earthy and soothing.

Their rudimentary wall paintings use a very basic graphic vocabulary: a circle, a triangle and a square. The circle and triangle come from their observation of nature, the circle representing the sun and the moon, the triangle derived from mountains and pointed trees. Only the square seems to obey a different logic and seems to be a human invention, indicating a sacred enclosure or a piece of land.