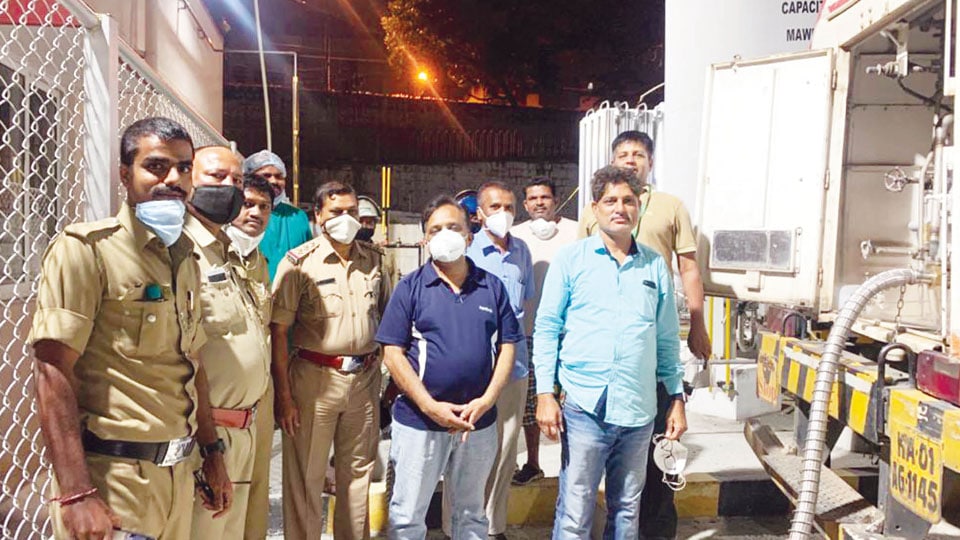 Bengaluru: Two senior BJP leaders — Deputy Chief Minister Dr. C.N. Ashwathnarayan and Bangalore Development Authority (BDA) Chairman S.R. Vishwanath—, have averted Chamarajanagar-like incidents in Bengaluru on Wednesday night and on Thursday, after two Hospitals in their Constituencies, were about to go out of oxygen supply.

They immediately swung into action, arranged for oxygen cylinders from other sources and  saved lives of over 250 Corona positive patients who were undergoing treatment.

Dr.  Renuka Prasad, who maintains oxygen supply at K.C. General Hospital, joined hands with Dr. Ashwathnarayan and averted a major mishap. The Hospital has an oxygen storage tank of 6 tonnes capacity and by late night on Wednesday, barely 0.5 tonnes was remaining.  About 200 patients were on treatment in oxygenated beds. The oxygen supply which was supposed to come from a private company in Ballari did not arrive, which caused anxious moments among the staff of the Hospital.  Dr. Renuka Prasad then apprised the Deputy Chief Minister  about the severity of the situation.

Immediately, Dr. Ashwathnarayan, also the MLA from Malleshwaram, sensed the gravity of the context and identified another private company located in Dabbaspet on Bengaluru-Pune National Highway (NH 48), at a distance of about 50 kms from the city, where oxygen was available and ordered the company to provide 20 jumbo cylinders. The company responded positively and agreed to send oxygen in a tanker to the Hospital.

In the meantime, the Task Force Head alerted the Traffic Police to ensure Zero Traffic Zone from Dabbaspet to the point of reach in Malleshwaram. The oxygen tank was refilled to 5.5 tonnes that is about 90 percent of the storage capacity, by 5 am on Thursday. Had the oxygen not arrived it might have led to another incident ending many lives.

The staff of the Hospital also played a crucial role throughout the night by monitoring the oxygen requirements of the patients. Till the oxygen arrived they managed with the limited available oxygen by analysing the requirement individually.

The Task Force Head and Dy. CM, who himself took the lead in this timely action was awake till 4.30 am. He also commended the efforts of the staff of the hospital.

In another incident on Thursday, Vishwanath was informed about oxygen going out of stock at a private hospital in Yalahanka where 28 Covid patients were being treated. On receipt of information, he personally went to the hospital and took stock of the situation. He, along with local Police officers, got the emergency supply of oxygen cylinders from Doddaballapur oxygen manufacturing plant and provided it to the hospital in right time.

In the meantime, of the total 28 patients, 12 were shifted to nearby private hospitals where oxygen was available. He also asked private hospitals not to admit patients beyond the capacity and play with the lives of people. Besides, they had to stock oxygen in Hospitals in tune with the number of  Covid patients.