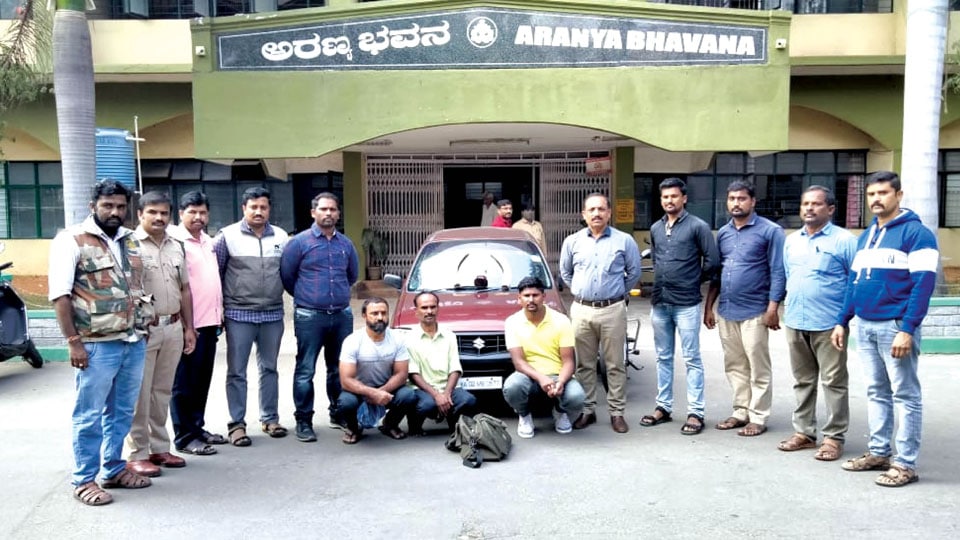 Probe on to identify workmen who engraved exquisite artefacts

Mysore/Mysuru: In spite of its sacred status, the Asian elephant is not safe. And they are being killed every other day for the precious ivory. And despite ban, illegal ivory trade thrives.

Though the trade is carried out in a clandestine manner, hoodwinking the authorities, there are umpteen cases of ivory seizures reported in the region. But it is a rare seizure when intricately carved ivory is confiscated.

The Forest Mobile Squad has made a prized catch by arresting three persons along with carved elephant tusks. The accused were trying to sell it in a car near Naidunagar yesterday. The accused have been identified as Manohar (40), a resident of Naidunagar, Sumanth (26) and Shivadas (55) from Somwarpet in Kodagu District.

The Mobile Squad team has seized one Alto car (KA-02-MB-0577) and a bike (KA-12-H-8233). The accused were apprehended while they were selling the ivory. The squad had got a tip-off that three persons were waiting for potential customers at Naidunagar. Based on the information, the spot was raided. Though the accused managed to dodge the sleuths for some time, they were caught red-handed.

The carved ivory includes an idol of Lord Krishna with his flute. The idol is placed on a wooden pedestal. The remaining two are one-and-a-half foot dexterously carved tusks. The workmanship is so perfect that the tusks stand out as a milky white 3-D sculpture.

The art of carving and engraving in ivory, an exceptionably pliant medium in the hands of skilled artisans, flourished in India only to be interrupted by a 1990 worldwide ban on buying and selling ivory under the Convention on International Trade in Endangered Species (CITES). 180 countries, including India have signed the pact.

Initial interrogation of the accused revealed that the tusks were not from the elephant that had been poached recently. Investigations are on to identify the workmen who carved the artefacts as cases can be booked against them too.

The elephant is protected under Schedule 1 of the Wildlife Protection Act, 1972. It lists it as a most endangered animal. Killing it or possessing any ivory item calls for a minimum three years in jail punishment and Rs. 50,000 fine. Possession, sale, workmanship, purchasing and transporting ivory all attract punishment.