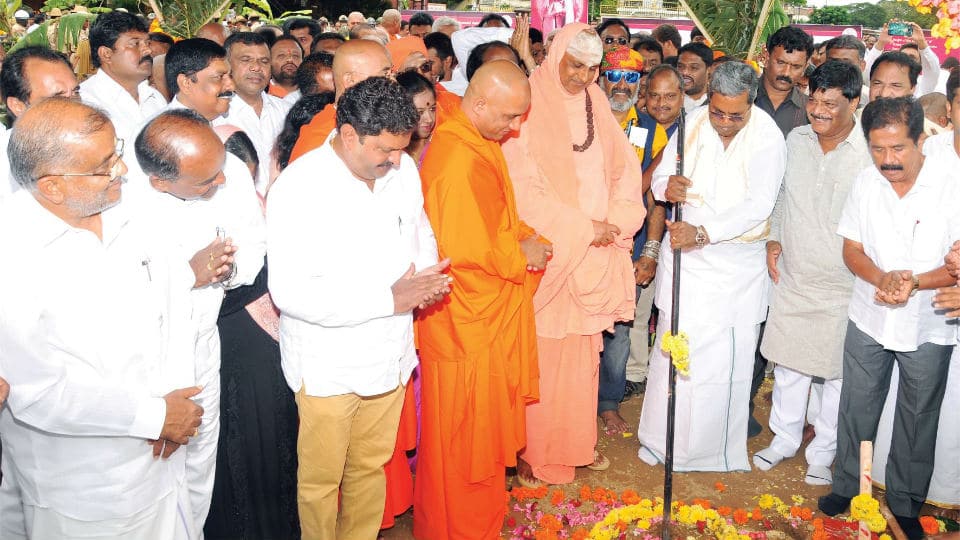 Mysuru: Chief Minister Siddharamaiah laid the foundation stone for the installation of a statue of Dr. Sri Shivarathri Rajendra Swamiji in front of JSS Mahavidyapeeta near Gun House Circle here this morning. Arriving at the venue at around d 11.45 am, Siddharamaiah performed the Bhoomi Puja for the statue to be constructed to commemorate the 102nd Jayanti Mahotsava of the Swamiji. He later proceeded towards a stage programme.

As part of the design, the life, achievements and messages of Shivarathri Rajendra Swamiji will be engraved on all the four sides of the pedestal.

Also, at the bottom of the pedestal, an octagonal platform will be created where the contributions of Rajendra Swamiji towards art, education, health, spirituality will be presented through embossing art.

As part of today’s event, an awareness camp on donation of blood, eye and body will also be held at the Mutt premises followed by bhajans. District Minister Dr. H.C. Mahadevappa will release a special souvenir ‘Prasada’ while Minister Tanveer Sait will release JSS Vartha Pathra. A centenary pictorial volume will also be released on the occasion. Over 134 retired employees of JSS Mahavidyapeetha will be felicitated and scholarships distributed to students.

Meanwhile, Aramane Ulisi Horata Samithi and BJP staged protest and counter protest over the installation of Dr. Rajendra Swamiji’s statue. While one group opposed the statue installation, the other was in its favour.

Members of Aramane Horata Samithi staged a protest near Mysuru Court Complex against the proposed installation of the statue near Gun House Circle. The Samithi pointed out that they had long back appealed the Chief Minister to install the statue of Srikanta Datta Narasimharaja Wadiyar, who was a multi-faceted personality with contributions to politics and sports. 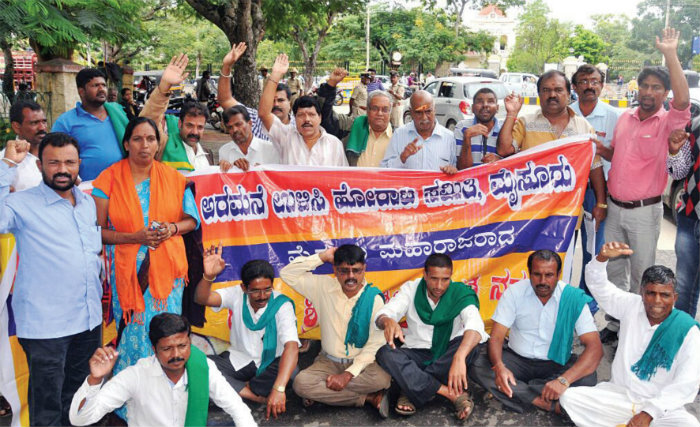 Members of Aramane Ulisi Horata
Samithi staging protest near Mysore Court Complex against the installation of the statue.

They added that the CM, while receiving their memorandum, had given instructions to the Deputy Commissioner to look into the matter who in turn had referred to the MCC Commissioner to inspect the place and submit a report.

They clarified that they were not against the installation of Swamiji’s statue but only wanted it elsewhere in city and pointed out that the city’s royal sanctity should be preserved around the periphery of the Palace and contended that the statue of Wadiyar would be the right choice.

The members said that they would intensify the protest if the government remained silent over the issue. The protest was led by Samithi Convenors T.K. Subramanya Raje Urs and Nandeesh G. Urs.

Meanwhile, another group of people led by BJP leader and Krishnarajendra Co-operative Bank Director Panchakshari staged a counter protest against the Samithi at the same venue insisting on the installation of the statue of the Swamiji and appealed the Samithi to drop the stir.

Thanks to a good number of Police personnel present at the spot, a possible clash between two groups was thwarted before any verbal duel set in.