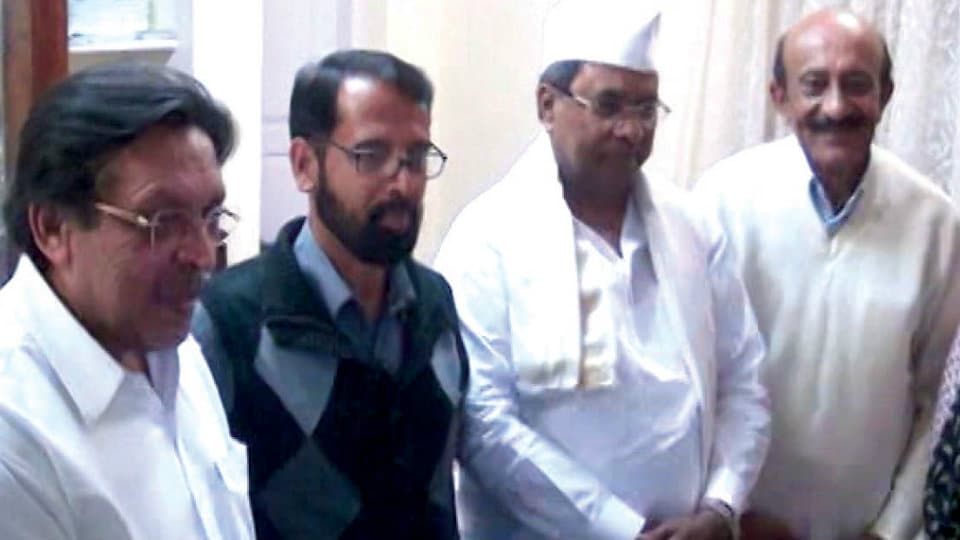 Madikeri: A courtesy meeting between Chief Minister Siddharamaiah and Senior JD(S) leader M.C. Nanaiah, who has adopted a politically neutral stand, has given rise to numerous speculation in this tiny coffee district of Kodagu. The meeting took place at Nanaiah’s house yesterday and the CM took time to meet the veteran politician and former Minister amidst his busy schedule where he launched a slew of development projects.

Yesterday, Nanaiah’s supporters had called a meeting at Hotel Valley View and discussed how their leader has been sidelined by JD(S). Some of the members expressed their dissatisfaction and openly expressed their desire to join Congress. The meeting was called by S.I. Muneer Ahmed, a close aide of M.C. Nanaiah.

After exchanging pleasantries and discussing several issues, both Siddharamaiah and Nanaiah held one-on-one secret talks where others who accompanied the CM were asked to leave the meeting room.

Later, in an informal chat with press persons, Siddharamaiah said it was just a courtesy visit and he had come to enquire about Nanaiah’s health. He clarified that the visit was not intended to get Nanaiah to join the Congress though he said that the JD(S) failed in utilising the services of a tall leader like Nanaiah.

Interestingly, while he thanked the CM for visiting him to enquire his health, Nanaiah said, “Politics is not like stagnant water. It is like a flowing stream. It must flow.” By saying this, the veteran politician has indicated that his remaining  in JD(S) is not certain.

His words have fuelled speculations and Nanaiah’s supporters have alleged that JD(S) State President H.D. Kumaraswamy has sidelined Nanaiah based   on former Minister B.A. Jeevijaya’s advice.

‘Nanaiah’s next move will be clear in 10 days’

An open meeting will be held at Madikeri within 10 days where the next political move of JD(S) leader and former Minister M.C. Nanaiah will be decided.

Speaking to Star of Mysore this morning, S.I. Muneer Ahmed, a close aide of Nanaiah, said that the meeting will be organised within 10 days. “Yesterday, the CM met our leader at his house and held political talks. I had also organised a meeting of Nanaiah’s supporters at Hotel Valley View yesterday where party workers openly expressed their dissatisfaction against JD(S) for sidelining us. The future course of action will be decided at the open meeting,” he said.