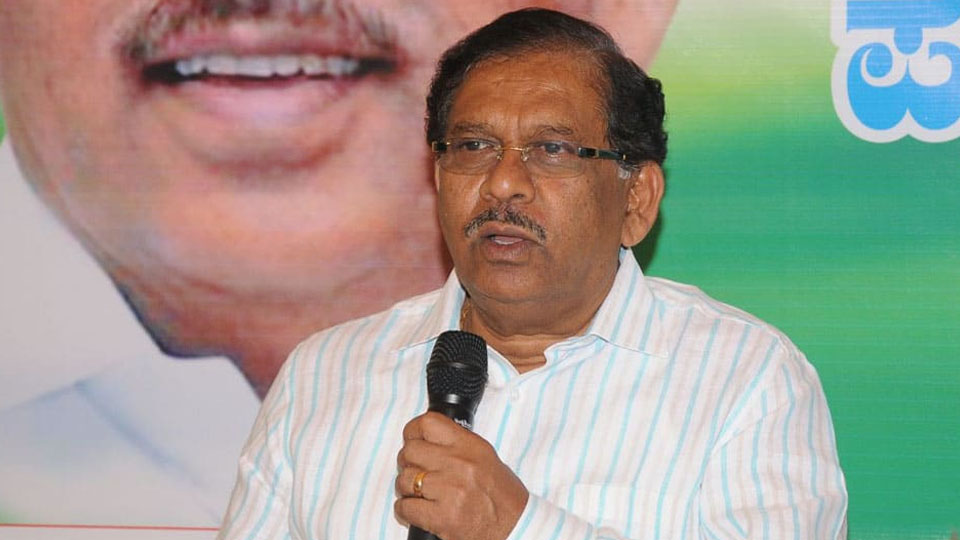 Bengaluru: KPCC President Dr. G. Parameshwara has expressed dismay over the party not retaining power in Karnataka after May 12 Assembly elections despite providing a stable and people-friendly government for five years since 2013 and said the cadre at district level should have performed better.

Speaking to reporters in Bengaluru yesterday, he said that the Congress debacle in the election was unexpected and the party leaders and cadre should brace up to defeat the BJP in the 2019 Lok Sabha elections.

Without analysing the reasons for the defeat after Congress which won 122 seats in the 224-member Karnataka Assembly in 2013 but ended up with 79 and offered an unconditional support to JD(S) which won just 37 seats, Parameshwara said that the meeting discussed the debacle of the party and debated on the ways to bring up the party in the State and the country before the Lok Sabha polls.

He said the party had agreed for a pre-poll tie up with coalition partner Janata Dal (S) for the coming Lok Sabha polls and the modalities were yet to be discussed.

Dr. Parameshwara, who is also the Deputy Chief Minister said he had asked the DCC Presidents for reasons how Congress lost in certain constituencies that were party bastions (to both BJP and JD-S). ‘’I have asked reports from DCC Presidents from certain districts for reasons for the loss of party candidates in our strongholds,’’ he said.

His comments come in the backdrop of Congress whitewash in Mysuru, Mandya and Hassan districts where its prominent leaders including Ministers in the Siddharamaiah Ministry lost. Besides this the party lost certain segments in Chamundeshwari where Siddharamaiah had lost besides former Revenue minister Kagodu Thimmappa in Sagar in Shivamogga and former Assembly speaker K.B. Koliwad had lost in Ranebennur in Haveri.

The meeting also discussed how the prominent Vokkaliga and Lingayat community did not support the party in Old Mysuru and North Karnataka respectively. In Mandya, Congress drew a blank as all the seats were won by JD(S).

On the tie up with JD(S) in the coalition government, the KPCC President said that the Congress community should follow high command’s instructions that the party should work in unison with the coalition partner across the State and any dissident activity will not be ‘advisable’. He said there had been a strong suggestion in the meeting that those who were Ministers for two terms should be replaced in the new Cabinet. This will be brought to the attention of the high command and it will have the final say.