Mysuru: District officials including the Deputy Commissioner and the City Police Commissioner donned a different role this morning with all of  them padded up for a cricket encounter at the Srikanta Datta Narasimharaja Wadiyar (SDNRW) Ground at Manasagangothri.

Today being a second Saturday, officials made the most of their day-off competing against each other in a friendly T20 match between Deputy Commissioner’s XI and Police Commissioner’s XI. The Police team emerged victorious  by one run in D/L method.

Vipul Kumar said that it was a good development to see the officials coming together to play a cricket match.

Later, DC D. Randeep said that the officials had a week-long practice specially for the match. He added that District Administration was thinking of organising more such matches.

Police Commissioner Subramanyeshwara Rao, who was padded-up to open  the batting for his side, said it was good initiative taken by the officials to organise such a tournament and added that the officials can also talk about the upcoming events like Dasara before taking up the matter officially. 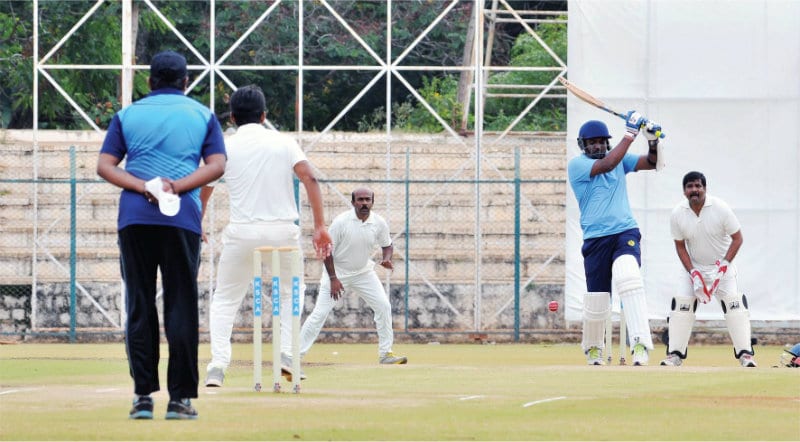 City Police Commissioner Dr. A. Subramanyeshwara Rao, who opened the innings for his team, trying to pull the ball towards mid-wicket at SDNR Wadiyar Stadium at Manasagangothri, this morning.

MCC Commissioner G. Jagadeesha scored 35 runs for his team and he was followed by Shivakumar who scored 21 and DC D. Randeep with 9.

District Police Control Room Inspector Harsha was declared the Best Batsman of the match while Deputy Director (Agriculture) Shivakumar was declared as the Best Bowler.