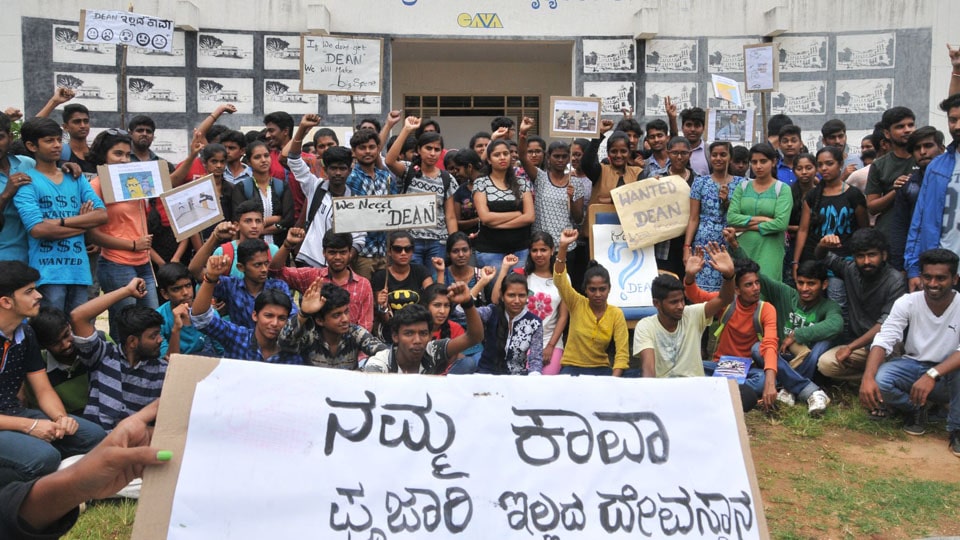 Mysuru: The indefinite stir by the students of Chamarajendra Academy of Visual Arts (CAVA) located at Siddarthanagar here, for want of a Dean, which began yesterday, entered the second day today.

As many as 150 students, under the banner of CAVA Kuncha Kavya Samskruthika Samithi, who boycotted classes this morning, are staging a protest in front of the College.

The protesting students said that they were finding it difficult to host CAVA Mela, which is held every year and expressed concerns that the Mela is not likely to happen this year as CAVA is without a head (Dean).

They said that though several letters were written to Kannada and Culture Minister Umashree and to the Principal Secretary of the Department to appoint a Dean, the issue has not been taken seriously.

Mysore University Research Scholors Association: Meanwhile, about 60 persons, under the banner of Mysore University Research Scholors Association staged a protest near the University Clock Tower here this morning condemning the derogatory statements made by elected representatives on Dalit women. The protesters alleged that the elected representatives were giving derogatory remarks on Dalit women when their responsibility is to protect them.

Protesters demanded apologies from the politicians who had given derogatory remarks.