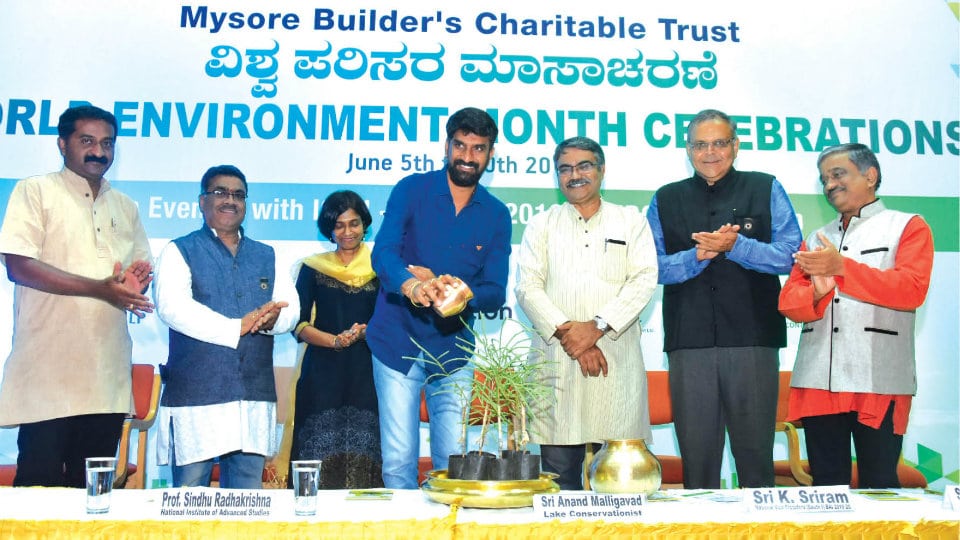 She was speaking during the inauguration of the World Environment of Month (WEM) celebrations organised by Builders’ Association of India (BAI), Mysuru Centre and Mysuru Builder’s Charitable Trust (MBCT) at the MBCT Auditorium in Vishweshwaranagar here yesterday.

In our country, nearly 85 percent of the farmers are ones with small holdings and they all depend only on rain. Agriculture accounts for 23 percent of GDP (Gross Domestic Product) in the country and it has effect on 70 percent on the self-employment, she said.

Lake Conservationist Anand Malligavad, the chief guest, who spoke in his own inimitable style, connected with audience instantly. He spoke about the revival of Kelasana Halli lake which he took upon himself to revive after seeing apathy of Government agencies. With minimum Budget, he could revive the lake of 36 acres in record 45 days with dedicated workforce, he added.

He called upon the audience not to worry about the alarming picture painted by environmentalists but to concentrate on what to do at local level, by themselves in their locality, in their road, and homes by involving themselves in saving the Planet Earth.

BAI National Vice-President K. Sriram appealed to builders not to be satisfied by only planting trees, but to build green-rated buildings as per Indian Green Building Council (IGBC) guidelines.

The programme was inaugurated by all the dignitaries by watering six saplings to signify six years of celebration of WEM by BAI.