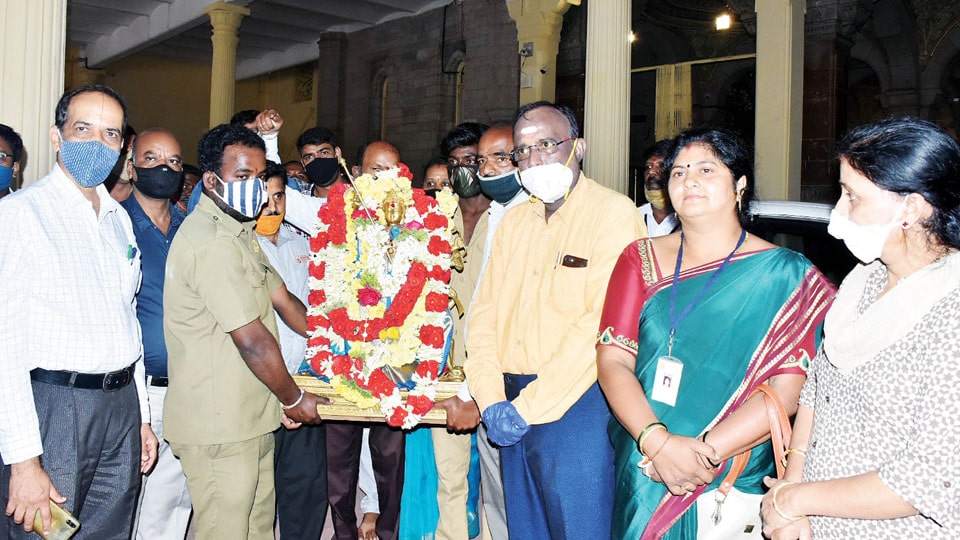 Dasara-2020: Palace Board hands over Chamundeshwari idol to Muzrai

Mysore/Mysuru: The countdown began for inauguration of Dasara-2020 with traditional handing over of the idol of Goddess Chamundeshwari, the presiding deity of Mysuru Royal family, to the Department of Muzrai by Mysore Palace Board here this morning.

The ‘Panchaloha’ idol, which has been in the possession of Palace Board, was handed over by T.S. Subramanya, Deputy Director, Mysore Palace Board, to Yathiraj Sampathkumaran, Executive Officer, Sri Chamundeshwari Temple, after performing puja in the auspicious time.

According to Yathiraj, the Chamundeshwari idol will be taken to Chamundi Hill where it will be polished and kept ready inside the temple. Priests will perform puja to the idol daily. During inauguration of Dasara festival on Oct. 17, the decorated Chamundeshwari idol will be placed inside the Silver Chariot.  The VVIPs will shower flower petals to the idol and declare the start of Dasara festivities.

He said this tradition is followed every year by shifting the Chamundeshwari idol from the Mysore Palace Board to Chamundi Hill at least ten days before the inauguration of Nada Habba. The idol will be returned to the Palace Board authorities after Jumboo Savari on Vijayadashami Day.

Today, the idol was taken to Chamundi Hill amid tight Police security.