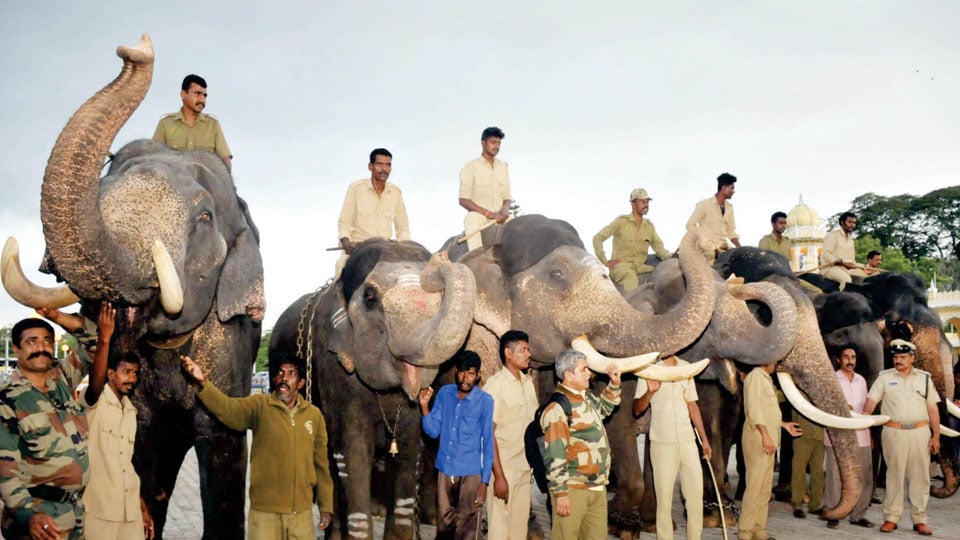 Dasara: Abhimanyu-led Jumbo team to arrive in Mysuru on Oct. 1

After Aranya Bhavan stay on day-1, traditional welcome at Mysore Palace on Oct.2

Mysore/Mysuru: Though the Corona pandemic has taken away the sheen of Mysuru Dasara festivities, it has been decided to carry out the century-old tradition adhering to the Government guidelines. Accordingly, the cynosure of all eyes, elephants selected from various elephant camps to take part in Dasara finale Jumboo Savari, will be arriving in city on Oct. 1. This ritual of sending elephants from the camps to city for Dasara is called Gajapayana.

Previously, 12 elephants in two batches along with Mahouts, Kavadis and their families used to be the royal guest for the festive season. They would arrive in city much in advance to acclimatise the pachyderms to city conditions including weather and noise. However, this year, as the Dasara celebrations including Jumboo Savari is limited to Palace premises alone, only five elephants including Howdah-bearer Abhimanyu will be arriving in city for the season.

The 53-year-old Abhimanyu from Mathigodu elephant camp will be accompanied by ‘Pattada Aane’ Vikrama and ‘Kumki Aane’ Vijaya from Anekadu, Gopi and another ‘Kumki Aane’ Kaveri from Dubare camp. They will be received at Aranya Bhavan in Ashokapuram here on Oct.1 and offered puja by the Forest Department personnel. Next day (Oct. 2), the jumbos will be taken to Mysore Palace where they will be given a traditional welcome by District Administration and Mysore Palace Board.