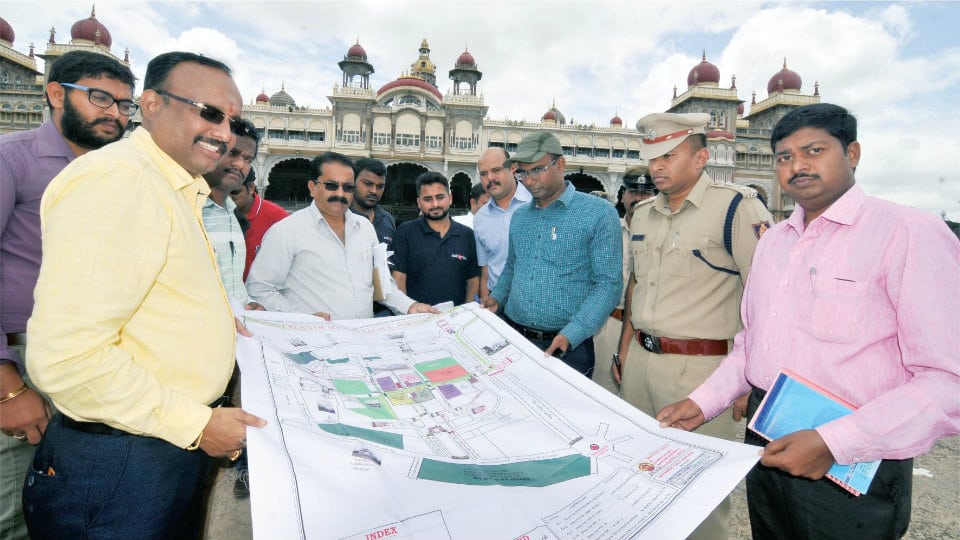 Mysuru: A special podium will be erected at the Mysore Palace for the first time for the convenience of the journalists to cover the Dasara Procession. Dasara Special Officer and Deputy Commissioner D. Randeep responded to the request of the photographers and videographers to install a special podium for an unhindered view of the inauguration of Jumboo Savari by the Chief Minister.

He was on an inspection tour to oversee the arrangements for Dasara Procession at the  Palace, here this morning. The media-persons, who accompanied him, gave a suggestion that a separate elevated enclosure should be provided for them to view and cover the grand event.

All these years, the media people were forced to sit in the hot sun or get drenched in the rain. Besides the media enclosure was right next to the dais where the CM came to offer flowers to the Howdah elephant to mark the inauguration of the Dasara procession.

The journalists, photographers and videographers did not have a clear view of the proceedings as they had to crane their necks to get a clear view.  Hence, the photographers and the journalists brought these problems to the notice of Randeep who, after giving a patient hearing, agreed to their request and directed the officials of the Dasara Committee to make the necessary arrangements. For the first time, the special platform will be raised opposite the dais where the Ambari elephant will greet the Chief Minister.

The scribes and the photographers will not only get a free view but also get a canopy over their head, Dasara Special Officer Randeep told Star of Mysore.

Later, the DC went through the blueprint of the Dasara Procession and inspected the entry gates for the tickets, pass and gold card holders.