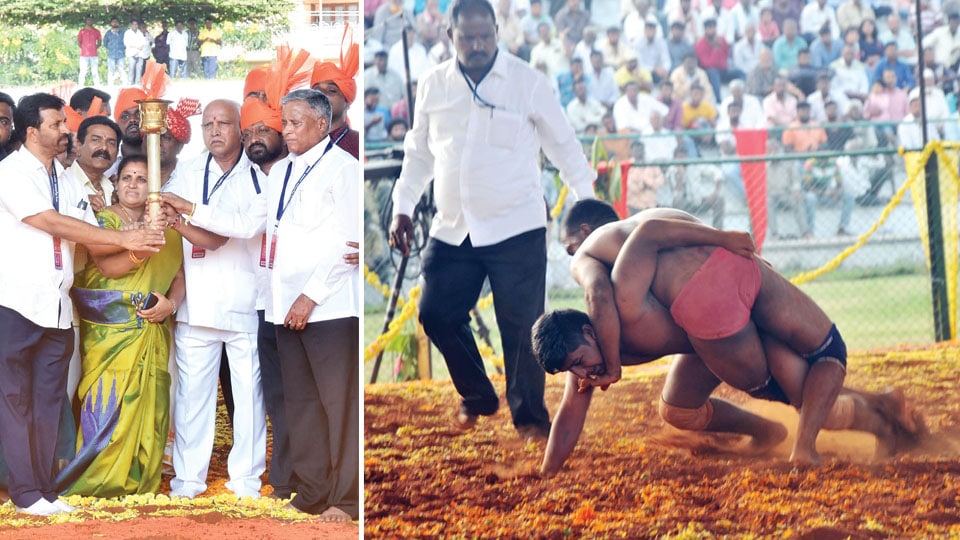 Mysuru: Chief Minister B.S. Yediyurappa on Sunday promised of hiking the monthly pension of wrestlers from Rs.500 to Rs.1,000.

Observing that Mysuru, which is known as the Cultural Capital of the State, is also known for its many Garadi Mane (traditional wrestling arenas), Yediyurappa said that wrestling became popular under Mysore Maharajas.

Noting that wrestling is a ‘Desi Sport,’ he said that the sport activates the mind and body.

Regretting that wrestling is getting less patronisation these days, the CM called upon the wrestlers to maintain health by choosing the best food habits and said that the BJP Government was committed to promote Desi Sports and Games.

Maintaining that Dasara seems to be incomplete without wrestling contest, the CM said that wrestling adds more sheen to Dasara festivities. Yediyurappa also laid the foundation stone for the construction of roof-top cover of spectators gallery and other development works taken up at a cost of Rs.3 crore at the Multi-purpose Stadium.

The CM handed over the Wrestling Torch brought by Pailwan D. Karigowda of K.G. Koppal to the Tournament organisers to mark the inauguration.

Winners of other wresting bouts

The following bouts were tied without results: Karthik Kate of Davangere Vs Kouthuk Dafale of Maharashtra, Mukesh D. Gowda of Mysuru Vs Shreyas Gowda of Lakshmipura, Karthik Ingle of Belagavi Vs Praveen Chikkahalli of Mysuru, Jayasimha of Tumakuru Vs Murali of Hosahalli, Ravi of Rammanahalli Vs Parashuram of Sangli, Girish of Palahalli Vs Tabaseer Pathan of Mysuru, Sujendra of Pandavapura Vs Vikas of Mahadevapura, Swaroop Gowda of Kanakapura Vs Chetan Gowda of Nazarbad, Chandru of Paduvarahalli Vs Gopi of Tonachikoppal, Deekshit of Bhootappana Garadi Vs Santosh of Pandavapura, Basavaraj of Malavalli Vs Hemanth of Lakshmipura, Junior Basavaraju of Kyathamaranahalli Vs Manoj Gowda of Bannur, Sadiq Muktasab of Mysuru Vs Raju of Lakshman Garadi, Suryakanth of Nanjangud Vs Ramu of Ganjam, Vijendra of Darasaguppe Vs Hemanth of Kumbarakoppal, Mahadeva Nayaka of Hunsur Vs Ravikiran of Bogadi, Michael Raj of F.S. Garadi Vs Jainulla of Iskiyan Garadi, Pramod Nayaka of Mellahalli Vs Shivakumar of Palahalli, Sanjay of Yadahalli Vs Pradeep Gowda of Vokkalageri, Ravi of Kyathamaranahalli Vs Kumar Kale of Nanjangud and Ranjan of K.G. Koppal Vs Junior Sharath of Nazarbad.