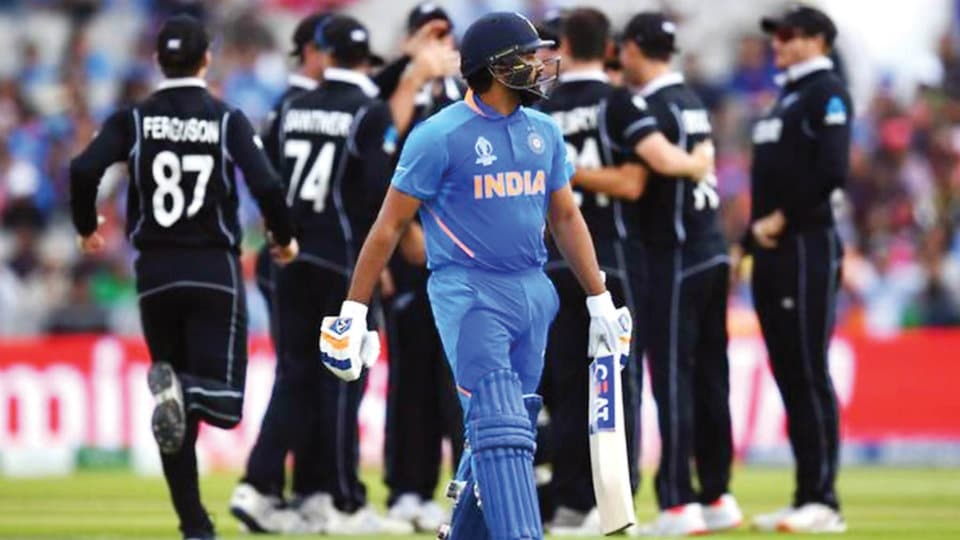 Hearty congratulations to the ‘Black Caps’ on their concerted efforts to defend a total that even Afghans would have fancied to chase comfortably. While our top order collapsed, the Kiwi bowlers Trent Boult, Matt Henry, Mit Santner and Lockie Ferguson deserve all the accolades for their tact and for exploiting the mindset of our batsmen.

Gloom of the ‘Grave Yard’ engulfed India and Indians across the globe as the ‘Men in Blue’ virtually surrendered to the ‘Black Caps’ in the ICC World Cup Semi-finals. No, certainly it is NOT the defeat that hurt us. It was the WAY in which we were ejected.

For ‘Team India’ that topped the table in the round-robin, chasing a modest 239 @ 4.78 runs per over should have been more of a well-calculated professional approach than a laboured one. With a seriously suspect middle order, we were ever dependent on the top and that succumbed; not only too early but also too ordinarily.

While Rohit got a peach from Henry, Virat could have settled down with a ‘Test Match’ mindset before venturing into the flourish that he did.

Boult has mesmerised most across world cricket with his abilities to swing the ball both ways; with the same line and length — and Virat was sucked in that vortex; Umpire’s call etc. notwithstanding. Dismissal of KLR was an apology to/for an opening batsman. In all the matches, KLR wore an ‘Exorcised’ look on his face. None of his efforts was as convincing as should have been; for the class he bears intrinsically. Neesham’s ‘One Handed’ catch of DK was probably the best in this ICC 2019; hitherto.

In the melee, it was a ‘God Sent’ opportunity for the young Rishabh and Hardik to exhibit patience and perseverance to get us across the line; than to throw away their wickets. If only MSD had added the much needed flair to the belligerence of Jeddu, we would have driven down to St. John’s Wood — The Lord’s — Mecca of Cricket to a rousing reception and spectatorship at the finals. Well, the disappointment will take time to wear off.

Amidst of the bowling greats like Mohammad Amir, Chris Woakes, Mit Starc, Shakib Al Hasan, Nabi, Jason Holder, Cottrell etc., our bowlers did a great job in winning us the round-robin matches as also in the semis. Rich compliments to them; particularly to Bumrah.

With ‘Tongue in Cheek,’ I may add that both Chahal and Kuldeep need the art of thinking out of the box; more than they do at IPL levels. Shami and Bhuvi were good — but inconsistent.

Generally speaking, the proverbial ‘English Weather’ was absent in this World Cup. Lateral movement of the ball in the air and off the pitch was not threatening. Even Jimmy Anderson could have been played with relative ease. Slowness of the pitch now and then was more on account of repetitive usages of the tracks that loosens the firmness in the roots of the turf; thus rendering the deck a touch slow. But these are to be anticipated. And surely, this was not the cause of our defeat in the semis.

Lastly, a word of appreciation to the demeanour of young Kane Williamson; a loveable person with extremely good cricketing manners — and with great acumen of captaincy. We wish him the best in the finals.