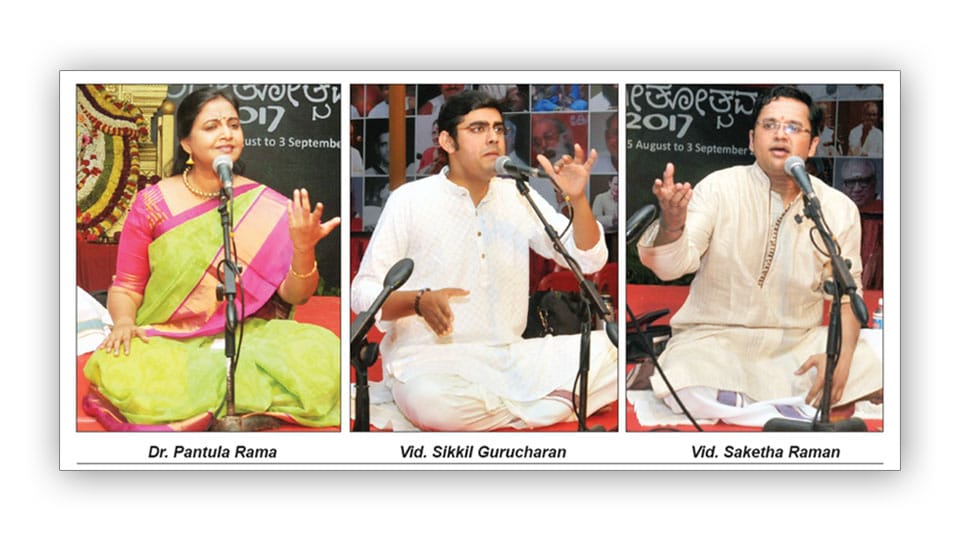 The most delightful and enjoyable Heritage Music Festival at the 8th Cross Ganapathi pandal (SPVGMC) was held from Aug.25 to Sept.3. It was a respectful homage to Vid. Dr. S. Ramanathan and Vid. Mysore V. Ramarathnam as a part of their centenary celebration too.

Rain or shine, the music lovers gathered in large numbers to listen to their favourite artistes with a deep sense of respect and admiration for them. The artistes too did not disappoint their fans. Apart from satisfying them with the popular numbers, there were rare ragas and unheard compositions and some carried a vintage flavour too. In all, it was a medley of the best of manodharma, lightening birkas, cascade of kalpanaswaras and a display of scholarship and vast repertoire. Some of the accompanying artistes raised to the heights of virtually carrying the concert on their shoulders with their exquisite playing and tremendous emotive synergy.

Dr. Pantula Rama who sang for the first time in Mysuru gave a scintillating concert on Aug. 28. Accompanied by Mutnery Srinivasa Narasimhamurthy on violin, Tumkur B. Ravishankar on mridanga and Vyasa Vithala on khanjira, she presented a perfect classical music in its purest form. Hailing from a musician’s family, music flows naturally in her. Each of the ragas he sang was a treat presented in its most natural beauty. It was traditional, yet innovative and absorbing. An unassuming-open throated singing combined with purity of classicism certainly pleased the rasikas. Her imagination knew no bounds when it came to kalpanaswaras. Her delineation of Dwijavanthi and Vardhini especially were lilting presentation.

Vid. Sikkil Gurucharan sang on Aug. 30 accompanied by Mathur Srinidhi, Vid. Umayalpuram Sivaraman and Giridhara Udupa. Star artiste Umayalpuram steals the show when he is on the stage. The concert began with a Varna in Shree raga ‘Saamininnekori’. ‘Sreenathaadiguruguha’ (Mayamalavagowla-Muthuswami Dixitar) was an appropriate selection which had a frill of short and crisp kalpanaswaras. A contrast ‘Teliyaleru Rama Bhakthimargamunu’ (Dhenuka-Tyagaraja) followed with a fine strokes by Umayalpuram.

Gurucharan’s mellifluous sketch of Andolika revealed his mastery over the raga and extolled the virtues of music. GNB’s ‘Kaaranamemikaalanai’ was supplemented with kalpanaswaras with intricate rhythms to showcase his expertise and aesthetic sense. Mathur Srinidhi too joined the musical dialogue that focused on nishada and rishabha in higher register.

After a vibrant rendition of rarely heard ‘Patti viduvaradu’ of Tyagaraja (Manjari), Gurucharan arrived at the main raga of the day-Bilahari. An exquisite alapana studded with fast sangathis, birkas that ran the entire gamut of the scale pleased the rasikas. The melodic patterns woven around the tharashadja was suffused with raga bhava. He was at ease in all the three octaves. The melodic bowing of Mathur Srinidhi too incorporated some time-tested and nostalgic phrases. Tyagaraja’s ‘Naajeevadhara’ was highlighted with a neraval at ‘Rajeevalochana Rajaraja Shiromani’ followed by an elaborate kalpanaswaras. The different patterns in various nade made it more interesting. The highlight of the day was the thaniavarthana between Umayalpuram and Giridhara Udupa. Though a short one, they did entertain their fans.

Vid. Saketha Raman gave a fine concert on Aug. 31 along with Vithalarangan (violin) and Vid. Umayalpuram Sivaraman. Saketha Raman carries the legacy of Vid. Lalgudi Jayaraman. Saketha Raman’s singing is more intimate than vibrant. Every raga he explores, be it a heavy raga like Todi or the elegant Brindavanasaranga, has a soothing effect on the listener. The tonal quality too adds to it. His vast repertoire of Tyagaraja’s compositions gives an opportunity to listen to many rare Krithis of the saint composer. Apart from very few keerthanas, he sang ‘Ramanamapayasake’ of Purandaradasa in detail on that day. Anandabhairavi rag alapana was filled with very delicate phrases that were brimming with ragabhava. Devaranama followed with bhakti bhava.

Brindavanasaranga was another raga that was elaborated. The beauty and the structure of the raga came alive in brilliant usage of both the nishadas. Young bundle of talent, Vithal Rangan rose to the occasion and his sketch of the raga was illumined with perfect gamakas and melodic phrases. ‘Kamalaptakula’ was overwhelming. Main raga of the day was Todi.

Both the artistes shared the alapna and elaborated it one after the other. Adherence to classicism and the fertile manodharma reigned their rendering. Kuranji, Mohanakalyani were  delicately woven too. ‘Jesinadellamarachitivo’ was a classic treat with a cascade of kalpanaswaras and the outstanding  and masterful taniavarthana by Umayalpuram Sivaraman.