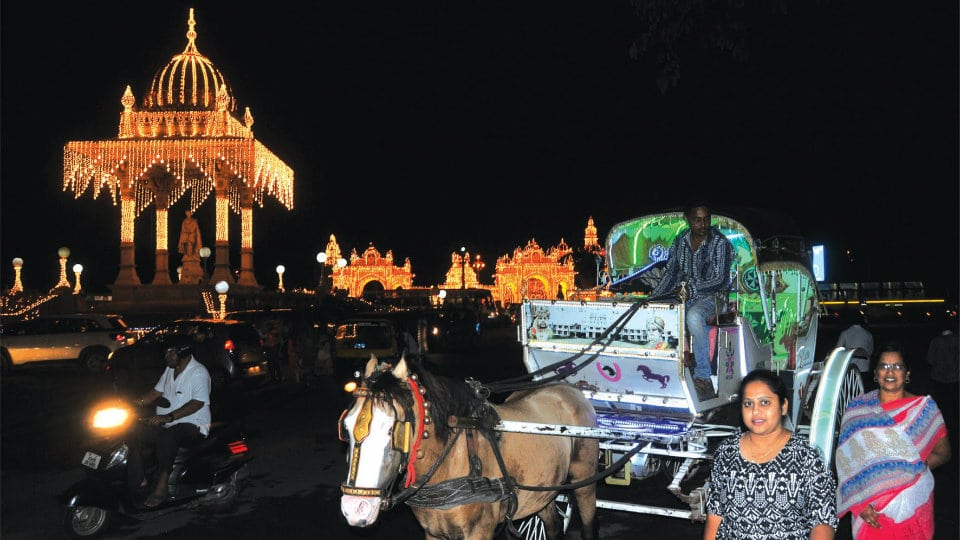 Mysuru: At a time when almost every tourist attraction in Mysuru is being fully utilised to attract hordes of visitors for Dasara to project the city as a place with a host of tourist activities, the Tourism Department has washed its hands off the historic Tongas and Sarots, an integral part of Mysuru tourism industry.

Since three years, the Tongas and Sarots that ferry tourists from the Mysore Palace to surrounding areas have been left to fend for themselves by the Department and the reason officials cite is the tongawallas and sarotwallas are from the unorganised sector and they do not have a registered association.

The Tourism Department has also pointed out that there is no fixed price for the Tonga and Sarot rides and many a times, the people who take the rides are fleeced with exorbitant prices.

Three years back, the Tourism Department used to provide Rs. 150 per day incentive for tongawallas and sarotwallas during Dasara season and it used to be hiked to Rs. 175 during the peak tourist season of Navaratri, though there was a demand from the tongawallas to increase the money to Rs. 250.

The Department also used to provide two sets of uniforms for selected tongawallas and sarotwallas and ask them to behave courteously with the tourists. But following complaints that the Tonga and Sarot drivers were fleecing tourists, especially foreign tourists and visitors who are not familiar with Kannada, the Department has stayed away from promoting Tonga tourism.

Speaking to Star of Mysore, Deputy Director of Tourism Department H.P. Janardhan said that the main reason for the Department to stop assistance to tongawallas is that they have no registered association. “Added, they have not approached us for any financial aid this time,” he said.

There are over 12 Sarots and over 45 Tongas that operate within the city limits. While a Sarot has four wheels and can carry 8 persons, the two-wheeled Tonga can carry four persons.

According to people who operate such services, there is no demand for their rides, unlike earlier. “Kote Anjaneyaswamy Temple, the place where we usually park our Tongas and Sarots is dominated by cars and other vehicles and we are not visible as there is no exclusive place to park,” said a Tonga owner.

Out of the small income they get, they will have to feed the horses and it nearly costs them Rs. 150 to Rs. 300 depending on the size of the horse. “We are a neglected lot and though new Tonga stands have been constructed at near Kukkarahalli Lake, Old RMC and Sub-urban Bus Stand, they have no drinking water facility,” another Tonga owner said.

“We hardly make two or three trips a day and only at a time when the Mysore Palace is illuminated. Due to traffic in the area and one-way restrictions, we hardly earn anything worth from the trips. For one round of the illuminated Palace, we charge about Rs. 250 to Rs. 300,” he added.

Tonga and Sarot owners have demanded the administration to listen to their pleas and give an opportunity for them to earn their livelihood.

“We are not asking the Tourism Department to provide us incentives. But from Sept. 17, the District Administration has allowed tourists to enter the Palace from Balarama Gate and due to this, tourists park their vehicles at Kote Anjaneyaswamy Temple premises, leaving no space for us to park our Tongas and Sarots,” a tongawalla said.