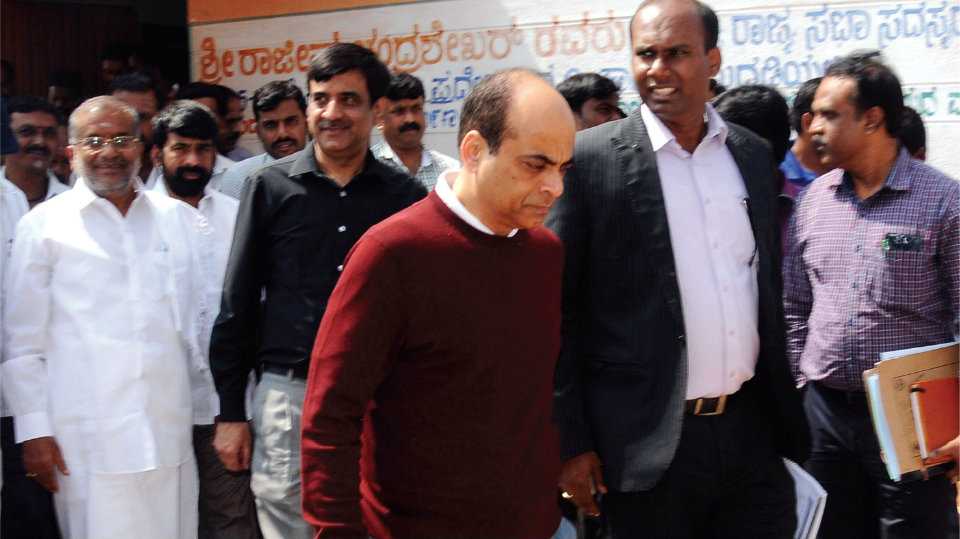 District Administration has sought Rs. 32.26 crore from the Centre towards drought relief works in the district which also includes Rs. 16.50 crore for Rabi crop loss.

Deputy Commissioner D. Randeep, who gave a power point presentation before three-member Inter-Ministerial Central team at the Government Guest House in city this morning, explained about the severe drought situation in district and the need for funds to carry out the drought relief works.

During his presentation, the DC sought Rs. 16.50 crore for disbursing compensation for Rabi crop, Rs. 60 lakh for supplying drinking water through tankers for 17 villages in 74 trips, Rs. 4.02 crore towards future requirement to supply drinking water to 124 villages, Rs. 5.25 crore towards CRF Infrastructure Restoration Works, Rs. 3.35 crore for purchase and transport of fodder for animals, Rs. 1.44 crore for purchase of medicines and nutrition supplement for animals and Rs. 1.10 crore for fodder mini kits.

After the meeting, Jalaj Shrivastava, Additional Secretary, Department of Agriculture, Government of India, said that the District Administration had explained the team about the severe drought situation in the district. He also said that the team would be visiting various villages across the district to access the situation.

“A total of three teams are visiting Karnataka to study the drought situation. While two teams are in North Karnataka region, one team has come to Mysuru. The teams will meet at Bengaluru on Monday and hold talks with the State Government before submitting a final report to the Centre,” he added.

Later, speaking to the media persons, MLA G.T. Devegowda said that the funds released by the Government were insufficient and requested for the release of more funds.

The team, comprising Jalaj Shrivastava, Anuradha, NITI Aayog Research Officer; V. Mohan Murali, Superintending Engineer, Ministry of Water Resources and Sachdeva, Director, PF-1, Ministry of Finance, New Delhi, visited Jattihundi and Jayapura where the villagers complained them regarding the scarcity of drinking water and fodder. They also alleged that the District Administration was not responding positively to their problems.