Mysuru: With 83rd Kannada Sahitya Sammelana being celebrated in city with a lot of fanfare, it is sad to see District Kannada Sahitya Bhavana at Vijayanagar First Stage lying in a state of total neglect and crying for attention.

The Bhavana was inaugurated with a lot of pomp in Sept. 2004 by the then Deputy Chief Minister Siddharamaiah (CM now) under a programme titled ‘Mysore Habba’. The building, with a huge hall to accommodate over 400 people and other auxiliary facilities, now lies in a dilapidated state with broken window panes and no fresh coat of paint ever since it was opened. 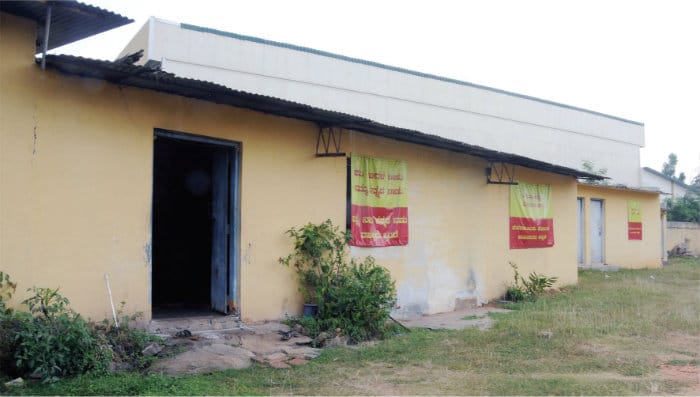 District Kannada Sahitya Bhavana at Vijayanagar First Stage, just over four kilometres from the Maharaja’s College Grounds where the 83rd Akhila Bharata Kannada Sahitya Sammelana is being held, lies in a state of total neglect.

A flag-post in front of the building stands bare with not even a Kannada flag hoisted when a big Sammelana is in progress at Maharaja’s College Grounds, not far away from the District Kannada Sahitya Bhavana.

Many Circles and thoroughfares in city are beautifully illuminated for the Sammelana but this building in question stands mute to the celebration, symbolizing a living testimony to official neglect. Ironically, there is a welcome board for litterateurs hung at the building which literally mocks at is purpose.

The main hall of the Bhavana has portraits of Goddess Bhuvaneshwari, Nalwadi Krishnaraja Wadiyar and Mahatma Gandhi with not even a garland on them.