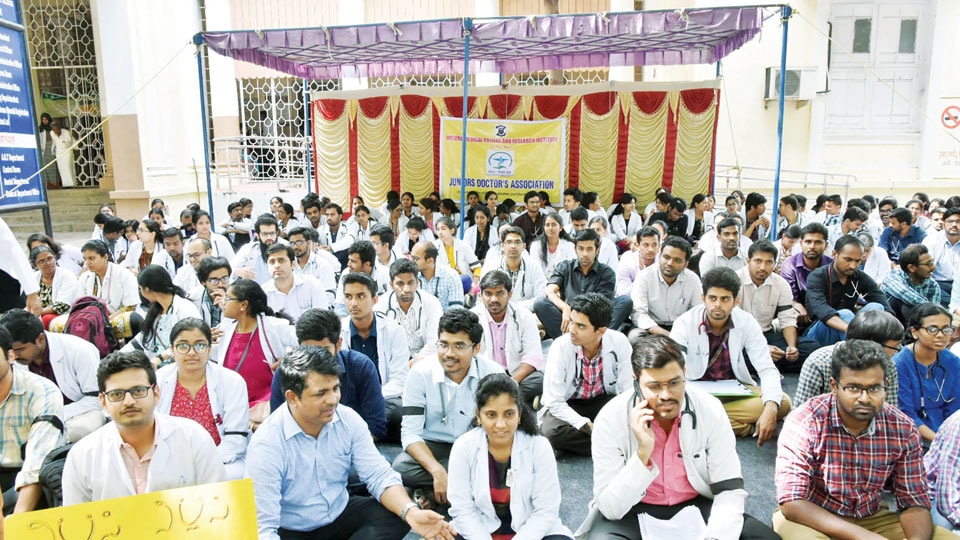 Mysuru: Outpatient services in Government-run hospitals and nursing homes was hit across the city this morning following a day-long protest called by Indian Medical Association (IMA) Karnataka Chapter in support of the striking junior doctors of Minto Eye Hospital in Bengaluru over alleged assault on a fellow junior doctor by pro-Kannada activists.

Doctors of the Minto Eye Hospital are on strike since Friday last protesting the alleged attack. IMA claimed that all IMA member hospitals and nursing homes voluntarily shut down their OPD (Outpatient Department) services and only emergency cases were taken up. However, OPD services in some private hospitals remained unaffected.

About 150 Junior Doctors at the K.R. Hospital held a protest in front of Mysuru Medical College and Research Institute (MMC&RI). The protest caused severe inconvenience to patients who had come from across the district to get treated for different ailments. While the junior doctors protested in front of K.R. Hospital, the patients were seen waiting outside OPDs of various departments. However, there was no disruption in emergency and ambulance services.

The protest received lukewarm response from private hospitals and nursing homes as the strike was called late yesterday evening. However, OPDs at a few private hospitals including Chandrakala, Vidyaranya, Brindavan, DRM Hospital and Bhanavi were closed in support of the protest.

Over 25,000 junior doctors across the State are on strike. Private Hospital and Nursing Homes Association (PHANA) and Indian Paediatricians Association, Mysuru Chapter have also extended their support for the striking junior doctors.

An IMA spokesperson said in Bengaluru that the pro-Kannada organisation has indicated that it has relented and its members have decided to surrender before the Police. “But we don’t want it to be a mere ritual or eyewash. We want a proper assurance from the outfit and the administration,” he said.

Meanwhile, people who had allegedly attacked doctors at the Minto Hospital said they were contemplating surrendering to the Police. They claimed that the surrender of those behind the attack should not be seen as defeat, adding they would continue to fight for the 22 cataract patients who allegedly lost their vision in the botched operation in July at the Minto Hospital.

Kannada activists have been demanding justice and proper compensation to the victims of the botched cataract surgery. A few people had lost their vision partially due to a drug reaction.