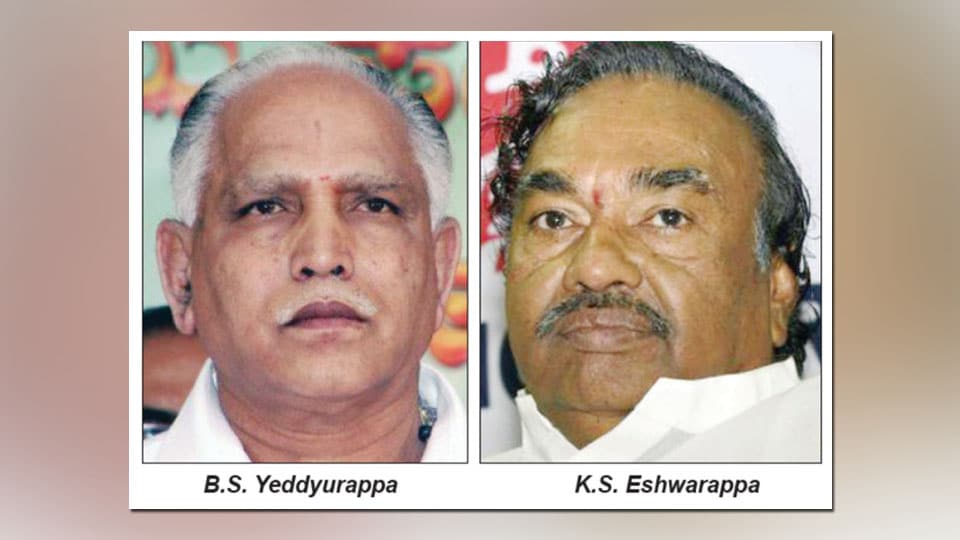 Bengaluru: Even as the BJP braces for the 2018 Assembly election, dissension has continued to haunt the party, with State BJP Chief Yeddyurappa’s friend-turned-foe K.S. Eshwarappa and his supporters deciding to exert pressure on the BJP top brass to save the party from the clutches of Yeddyurappa.

Eshwarappa’s supporters have convened a meeting at the Palace Grounds in Bengaluru on Apr.27 in which hundreds of local party leaders and from other parts of the state are expected to take part.

At the meeting, the leaders are likely to take a decision on exerting pressure on the BJP Central leadership to put a brake to Yeddyurappa’s unilateral decisions, which have been severely hurting the party.

Eshwarappa faction is of the opinion that Yeddyurappa had miserably failed in strengthening the party organisation.

Accusing Yeddyurappa of appointing only his followers to key party posts, the dissident leaders said most of Yeddyurappa’s decisions have caused damage to the party, rather than strengthening it.

These leaders point out that the failure of the party to win the Nanjangud and Gundlupet by-polls, despite favourable response from the voters during the campaign, is an example of the failure of Yeddyurappa’s leadership.

The dissident leaders are also said to be seeking a change in leadership of the party in the backdrop of by-poll defeat.