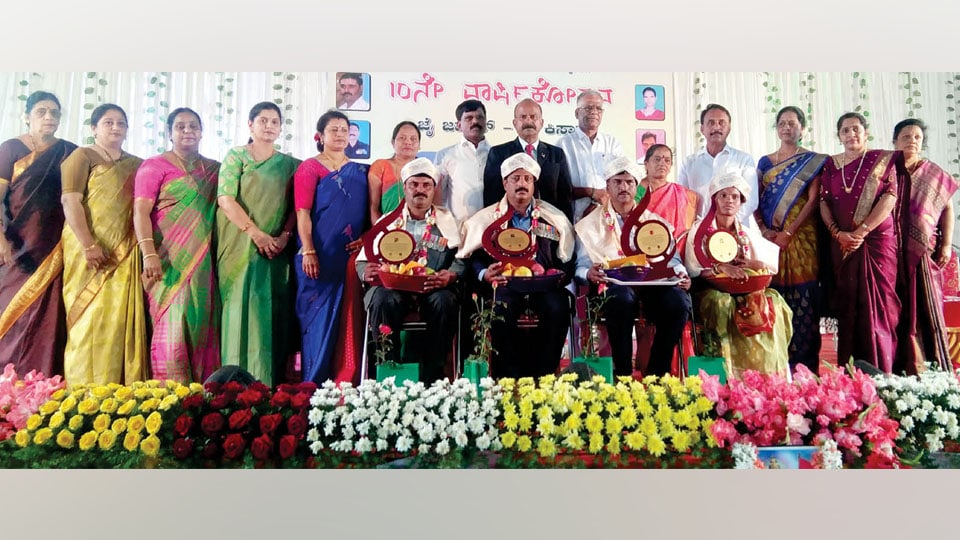 Mysuru: The 10th anniversary celebrations of Arivina Mane Mahila Balaga, a women’s organisation, was marked by the felicitation of three ex-servicemen and a woman farmer in city yesterday. The event was organised at Puttaraja Gavai Stadium in J.P. Nagar here.

Ex-servicemen Sepoy L. Siddappaji, Havildar Mechanda G. Chittiappa, Naik M.G. Hiriyanna and progressive woman farmer Sunitha Andani from Sathegala village in Kollegal were felicitated. The celebrations were organised a few days ahead of Kargil Vijay Diwas, which will be observed on July 26 and aptly, the theme of celebrations was ‘Jai Jawan, Jai Kisan.’

Appreciating the initiative of Arivina Mane Mahila Balaga of felicitating farmers and soldiers, former MLC Prof. K.R. Mallikarjunappa said that only when social organisations hold such events and felicitate those who work selflessly for the society, a society can become strong and influence more people to do service. This way, a robust society can be built, he said.

Retired Senior Non-Commissioned Officer of Indian Air Force (IAF) and Founder-President of VeKare Ex-Servicemen Trust Mandetira N. Subramani said that if soldiers get recognised on National Days, it is very rare for the farmers to get recognised. Arivina Mane Mahila Balaga has taken an appreciable initiative of felicitating both of them.

Without people from defence and agriculture sectors, security at the borders is an impossible task. He said that youths join the defence forces at a young age of 17 and 22 years, live in hostile conditions and sacrifice their prime youth without bothering about anything but the security of the country, he said and added that likewise, farmers engage in food production to feed their countrymen against all odds.

Urging the audience to encourage their children to join the defence forces, Subramani said even girls can go on to be fighter pilots. Defence will not only provide them with a career option but also enable them to lead a disciplined life, he added.